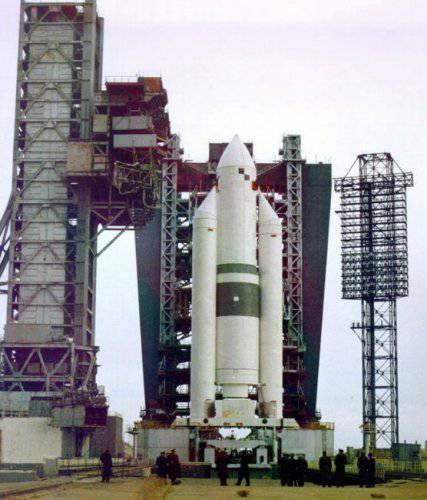 15 June 1988 from the Baikonur launch site successfully launched into space the world's most powerful launch vehicle, Energy. It was developed in the Podlipkinsky Design Bureau of the same name under the leadership of General Designer Viktor Petrovich Glushko. Energy could put into space a payload weighing 100 tons - 2 rail cars! And, although by the decision of the Government of the USSR, it was intended for the launching of the Buran reusable spacecraft into orbit, this rocket was universal and could be used for flights to the Moon and other planets.

In 1975-1977 in the process of creating launch vehicles of the super-heavy class “Energy” and the middle class “Zenith”, research was conducted on the creation of a launch vehicle of an intermediate (heavy) class with a payload 30-60 t.

In 1985, in accordance with the Decree of 25 December 1984, a draft project was released showing the fundamental possibility of creating a launch vehicle of a heavy class Thunderstorm at X-NUMX production and technological base with a low orbit carrying capacity to 63 t.

According to the decision of the NTS of the Ministry of General Machinery of 18 in August 1988, NPO Energia was instructed to clarify the conceptual design for the Thunderstorm launch vehicle (RLA-125) taking into account the launch of spacecraft in the interests of science, the national economy and the Ministry of Defense with 25 tons to 40 t in low orbits.

The launch vehicle received the official name "Energy-M". In the same year, a full-sized model of the rocket was manufactured and installed at the launch position. 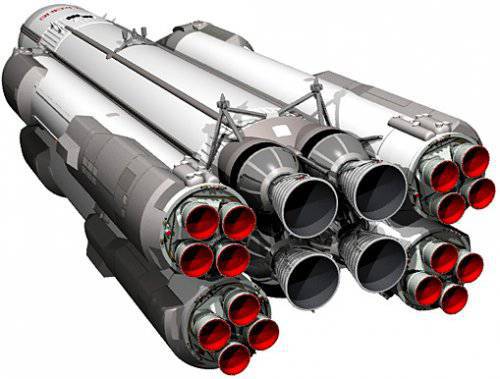 8 April 1991 was issued a Resolution on the creation of a heavy-class launch vehicle on a competitive basis. The competition was attended by the NPO Energia, the NPO Yuzhnoye (S.N. Konyukhov) and the Salyut Design Bureau D.A. Polukhin). 6 July 1991. The collegium and the presidium of the NTS Minobchemash decided on the feasibility of developing and building a heavy-class carrier rocket Energia-M.

The development of baseline data and technical specifications for components of the Energia-M launch vehicle began in the same year 1991.

1991 to 1993 design documentation was developed and production was prepared for the production of a launch vehicle. In 1993, coordination was completed and tactical and technical tasks were issued for the development of the Energia-M carrier rocket, approved by the General Director of the RCA, Yu.N. Koptev, and coordinated with the commander of the VKS Defense Ministry of the Russian Federation VL Ivanov.

The two-stage launch vehicle Energia-M is the base for three-stage modifications, differing in the types of overclocking units used.

On the central unit there is one RD-0120 engine, which is launched on Earth with advance over the RD-170 1 engines of the stage.

The payload is placed in the cargo compartment of the 2 unit and is mechanically connected to either the transfer compartment (in a two-stage version) or the booster unit (in a three-stage version).
The control and stabilization of the launch vehicle in the active part of the flight is carried out by deflecting the thrust vector of the 1 and 2 engines in two planes using the steering gear system, while the 1 stage oscillates in four planes of four combustion chambers of each engine, and on the 2 stage rotates the engine also in two planes, and for roll control, special roll units operating on gas taken from the 2 stage propulsion system are used.

The proposed configuration of the launch vehicle Energia-M, unlike all existing missiles, provides for mounting side blocks in the upper link belt on the cargo compartment of the central unit, which makes it possible, by reducing the length of the missile, to reduce the level of loads on the modular parts of the side blocks to the level of loads for a rocket carrier "Energy", to abandon the special support device (simulators of the two side blocks), as well as to increase the mass of the payload due to the separation of the upper belt of power links with the cargo compartment.

The booster "Energy-M" was created with the maximum borrowing of blocks, systems and units that have passed experimental and ground testing as part of the launch vehicles "Zenit" and "Energy", including the use of high-energy fuel - liquid hydrogen, and its operation was provided for starting constructions and from the technical complex of the carrier rocket "Energy". 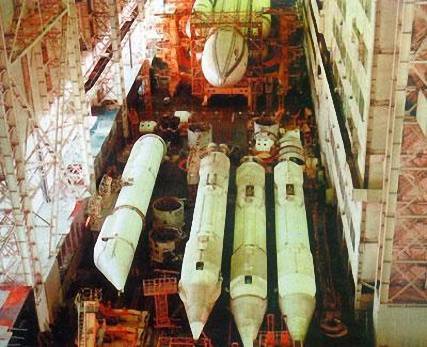 The analysis of research programs, national economic and space activities and the tasks of the Ministry of Defense with 1992 to 2005, the characteristics of spacecraft involved in these programs, as well as the characteristics of foreign spacecraft shows a trend of increasing their masses and dimensions. So, by 2005, the spacecraft mass can increase to 6 t in geostationary and up to 23 t in highly elliptical orbits. Removal of such spacecraft with increased mass is provided by the Energia-M launch vehicle.

Analysis of currently developed payloads shows that among them there are those characterized by the impossibility of creating a dense layout under the fairing of the launch vehicle at the launch site. These are primarily payloads intended for the creation of large-size structures in space, coherent spacecraft with several spatially separated antennas or spacecraft with single large antennas. The booster "Energy-M", having increased the size of the zone of the payload and, accordingly, the fairing, also provides the removal of such payloads.

Currently, group spacecraft launch is widely used, which is implemented on domestic Cyclone and Cosmos launch vehicles, on foreign launch vehicles Ariane-4 and Titan-3 and planned for Ariane-5 launch vehicles ", H-2," Great March-3 ", as well as on the booster rocket" Energy-M ". This method of launching reduces the cost of launching spacecraft by replacing several launches of smaller launch vehicles with one launch of a larger launching vehicle; creates more favorable conditions for national economic activities in the areas of exclusion by reducing the multiplicity and total duration of the launch restrictions in these areas, and also expands the range of launch vehicles, making them more competitive in the market for launch vehicles.

The implementation of the development of the launch vehicle Energia-M will allow the solution of target tasks in the interests of the national economy, science and defense (the removal of heavy satellites of communication systems, modules of space stations, etc.); in the near future, to replace the Proton launch vehicle on highly toxic fuel components, the use of which leads to exclusion of alienated lands from the national economy and represents a great potential environmental threat both in the event of a launch vehicle accident, and during transportation and storage of fuel components, and also to keep the created complex of the launch vehicle "Energy" in working condition.

Being the only carrier rocket using environmentally friendly components of fuel and having a relatively low launch cost, the Energia-M launch vehicle will have a high competitiveness on the international market compared to existing and developed foreign launch vehicles Titan-4 "(USA), Arian-5" (ESA), "H-2" (Japan), etc.

Further development of the Energia-M launch vehicle is possible in the direction of its use for launching a small multi-purpose orbital spacecraft designed for transport and technological work during the servicing of orbital stations, as well as using reusable 1 units in its composition that are returned to the launch site. eliminates the need for land alienation for the areas where they fall.
Unfortunately, in 1995, the pace of development of a launch vehicle has dramatically decreased. Funding work has been suspended.
Ctrl Enter
Noticed oshЫbku Highlight text and press. Ctrl + Enter
We are
Flight of the Buran - as it wereSecrets of forgotten victories. Beyond the constructor
Military Reviewin Yandex News
Military Reviewin Google News
1 comment
Information
Dear reader, to leave comments on the publication, you must sign in.