Ukraine: Monopoly on the truth is worse than a lie 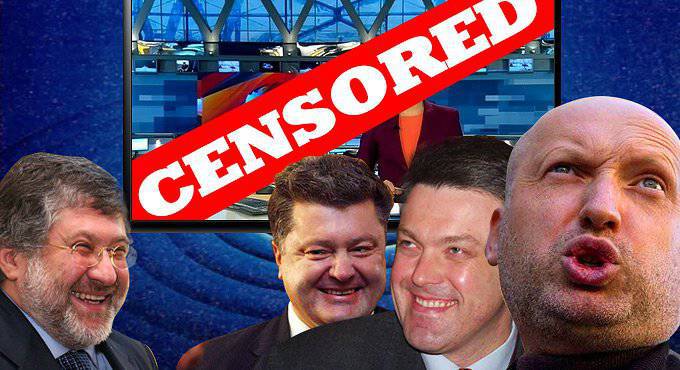 The new authorities of Ukraine, trying to distract the population from failures in economic policy, are switching the attention of society to the conflict with Moscow and the threat of a Russian military invasion. Kiev, once boasted of freedom of speech in the media, today introduces unofficial censorship on central television channels. So say experts polled by correspondents "Navigator".

“We have freedom of speech. The achievement that the country has demonstrated today, ”Petro Poroshenko, one of the heroes of the Maidan, announced the day before. However, controlled by the millionaire “Channel 5” on the day of the record collapse of the Ukrainian currency to almost 14 UAH per dollar, he preferred to remain silent about this in the final issue Newsconcentrating the attention of the audience on the counter-revolutionary actions of Russia.

“The situation in the South-East is a gift to Yatsenyuk and other professionals, who in two months have driven the country into such an economic dead end, from where it cannot be reached. I would not be surprised if, having stopped the payment of pensions soon, they would blame Putin for that. The people are illiterate, the people will believe, ”commented the information policy of the Kiev authorities, the journalist Anatoly Shary, to Navigator, a political refugee who left Ukraine after the publication of investigations about corruption in the Ministry of Internal Affairs.

“All the central TV channels that beat their breasts and said that they are independent today show the same picture with the same text. Ukrainian society is immersed in a state of permanent hysteria, when caring for themselves and today give way to feelings of hatred and anger. Throughout the existence of the Ukrainian state from Russia, the image of the enemy was cultivated. Now, against it, forgetting about its problems, a real information war is being waged, ”the Crimean political scientist Andrei Nikiforov said.

The Ukrainian government deliberately silent about the causes and consequences of the fall in industrial production, underestimates inflation and unemployment, said the deputy of the Verkhovna Rada of the Communist Party Spiridon Kilinkarov.

“It is clear that we are waiting for an increase in unemployment, and a colossal one. This is not even due to the fact that today the IMF does not give money, and supposedly there is no possibility to control the hryvnia exchange rate, but with the established relations with the Russian Federation. Even today, in the southeast, people are being transferred to a three-day work schedule. And what budget revenues can we talk about? And there is nothing to compensate for this, ”the parliamentarian noted.

“According to my data, before Maidan, the level of economic development reached 69% of the level of 90's. It all collapsed. The consequences can be seen at gas stations, in exchange offices, shops. After that, they started talking about the threat from Russia. Whatever happens now, Putin will be to blame, ”TV presenter Grigory Kvasnyuk, a member of the city council of Odessa, agrees with Navigator.

“The so-called aggression of Russia will explain all the troubles and problems in the next few months, or even years. But at the same time, we are well aware that, as it were, there is no distraction from the problems of the economy, the current authorities are hoping, sooner or later, to suppress popular resistance in the Donbas, and in this all Ukrainian media are used as propaganda tools. Unfortunately, we have to state the death of independent Ukrainian journalism. I don’t want to offend anyone, probably, some journalists and mass media still remain somewhere who are trying to preserve objectivity in this propaganda war orgy, but in general the Ukrainian media, the main TV channels, have become a tool of propaganda war and are apparently proud of it believing that in this way they “equated the pen with the bayonet”. And now they can swing this feather and strike their imaginary opponents, ”political analyst Vladimir Kornilov specifies.

Oleg Rodivilov, an expert at the Institute of CIS Countries, considers a striking example of information manipulations to be the UNIAN news agency, owned by oligarch Igor Kolomoisky, the very one that promises to distribute thousands of dollars on 10 for the caught “Muscovites”.

“I regularly read the UNIAN news feed. In the last month, they do not cover the domestic political, economic, economic situation in the country. Today they have the Crimea, the South-East, NATO and Russia. Having created the image of an external enemy from Russia, they distract the attention of the masses from the internal problems of Ukraine, ”Rodivilov states.

In order to finally “fix the result”, the broadcasting of Russian news channels, which allow a critical assessment of the actions of the new government, has been banned in Ukraine for several weeks.

“It is clear that disabling the Russian channels does not fit into the framework of any laws, but it is also a tool of propaganda war, and very effective. In a large part of Ukraine, people are deprived of the opportunity to receive any alternative information that differs from the official point of view. And the Ukrainian media serve only the current government, and, as I said, are proud of it, ”Kornilov notes.

“Of all the possible options, the authorities in Kiev choose the worst, whether it is arrests or blackouts of TV channels. In the modern world it is impossible to stop a person’s access to information. Turning off TV channels is the worst practice, however, which they have learned to bypass since the times of the Soviet Union, ”Grigory Kvasnyuk recalls from Odessa.

Information warfare is fought by Kiev not only against Russia, but also of its own fellow citizens from the South-East. Calling the opponents of the revolution criminals, the channels immediately place on the screens the logos of the action "United Country".

“Neither the central channels, nor the central Internet media of the so-called“ democratic orientation ”, but no longer have others, because they don’t cover the situation in the Donbas dangerously and objectively. There is a certain tracing-paper, cliche, on it news and drive. No one will call people “protesters,” for example, or “activists.” They are “separatists”, “extremists”, or even better “terrorists”. Any rumor directed against these people is presented as a fact, and any fact directed against their opponents (of the same Right Sector) seems to be fake, ”says Shari.

“In the address of the protesters is used negatively colored vocabulary,“ hate speech ”. Labels are actively hung, and, judging by the fact that this has become a widespread phenomenon, I cannot rule out that this is not just the initiative of “patriotic” journalists, but an editorial policy agreed with the state. For example, if people with machine guns can still be characterized as militants and this cannot be considered a "heyt-match", then the widespread use of the label "separatists" for all participants in the protests is indicative. This is an element of misinformation and intimidation. At the same time, there is no objective picture of the demands of the protesters, ”political analyst Alexei Blyuminov told Navigator.

"Ukrainian media - weapon mass destruction for the population of Ukraine. The West and the local oligarchs are waging war against Russia and the Ukrainian people proper, by all means trying to turn innocent people into an army of “American bacon”, into Russophobes, ready to kill their brothers in the Donbas and throughout the South-East. Ukrainian media today is committing a war crime against their country and their people, the payback for which is not far off, ”says Sergei Veselovsky, the author of the Internet-TV project South-Eastern Front, to Navigator.