April 23 2014
45
From 9 to 12 July in Minsk will host an exhibition of military equipment "Milex-2014". One of the important segments of the exhibition will be the demonstration of a new modification of multi-purpose armored vehicles. These cars are created by the Belarusian manufacturer. "Minotor-Service". 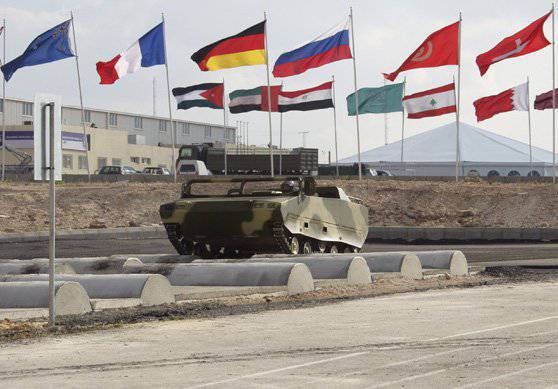 Director General of Minotor-Service Valery Grebenshchikov in an interview for an information agency "ARMS-TASS" stated:

We intend to demonstrate full-scale samples of armored vehicles based on a light tracked vehicle of the 3T family.

The new machine has been developed in two versions of the housing on a torsion bar. A large building is supposed to be used for the production of CMVs (command and control machines), technical support machines, as well as mobile hospitals. Small corps will be used for WFP (infantry support vehicles) and anti-tank weapons systems.

According to the developers, you can place special equipment weighing up to 2,5 tons on new armored vehicles.

Valery Grebenshchikov:
Given the situation in Ukraine, we believe that these machines will find application in the Armed Forces of both Belarus and Russia.

The general director of Minotor-Service noted that armored vehicles can be offered to buyers in foreign countries.

At the previous exhibition “Milex”, held in 2011, products were exposed to almost one hundred and fifty enterprises, design bureaus and institutes from five countries of the world. Interest in the samples of armored vehicles presented at Milex-2011 was shown by customers and experts from 15 countries.