April 24 2014
22
Perhaps, for the first time, the position of the head of state on the development of the Arctic was sounded so openly and unambiguously. A full-fledged meeting of the Security Council was devoted to Russia's Arctic policy, at which Vladimir Putin announced that the Russian Federation intends to actively explore its Arctic territories, for the reason that the Arctic every year more and more clearly manifests itself as a strategic region with a huge concentration of resources trade routes, with military capabilities. 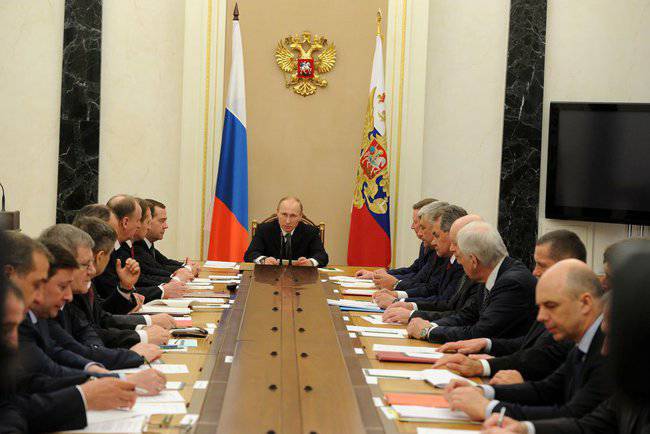 In the Arctic region, almost all aspects of national security are concentrated.

It’s hard to disagree. The Arctic shelf, for the recognition of which by international institutions (primarily, of course, the UN), according to Vladimir Putin, Russia will fight - this is oil and gas, and their significance, judging by everything, will be decisive for the domestic economy for decades to come. The president gave an example of the fact that already now the bowels of the Russian segment of the Arctic space are being developed quite successfully:

Just a few days ago, the first batch of oil was shipped from the Prirazlomnaya platform in the Pechora Sea, Vladimir Putin recalled. - This is one of the largest, if not the largest project, probably in this area: a huge, completely, cyclopean-scale platform, the latest technologies, materials - in general, all for the first time, a huge serious project, practically the first step in mastering arctic shelf zone
- official Putin cites Vladimir Putin Russian President's website.

Prirazlomnaya is the very platform that was attacked by Greenpeace activists, who stubbornly call themselves nature defenders. We have repeatedly discussed here about why, from the great variety of platforms of different states working on the shelves, Greenpeace suddenly chose the Russian, and in the information plan having provided its attack with sentimental materials of its “care” about the fauna of the region. If it were not for the effective work of the Russian border guards and the employees of Prirazlomnaya itself, then the first oil produced on the shelf would hardly have been shipped now, or it would hardly have been shipped at all.

By the way, before starting to use the platform, the project passed a multi-stage environmental impact assessment, including with the involvement of foreign experts. The platform was given the highest security class.
Prirazlomnaya is a truly unique structure. This is the first platform in the world that belongs to the class of ice-resistant. Capacitive reserve of the platform is 100 thousand tons. At the same time, it is possible to carry out work at Prirazlomnaya at a temperature and all is -50 centigrade.

Oil recovered from the Arctic shelf of the Sovomflot tanker, Mikhail Ulyanov, departed for Rotterdam, the Netherlands. It is extremely interesting that at the time of the arrival of “Mikhail Ulyanov” in the Dutch port the sea vessels “Greenpeace” decided to arrange an “open day” in Holland. Some came to the ports of the Netherlands, having covered several thousand miles.

Such information appeared on Twitter by Menno de Jong and other users who are on the green theme. 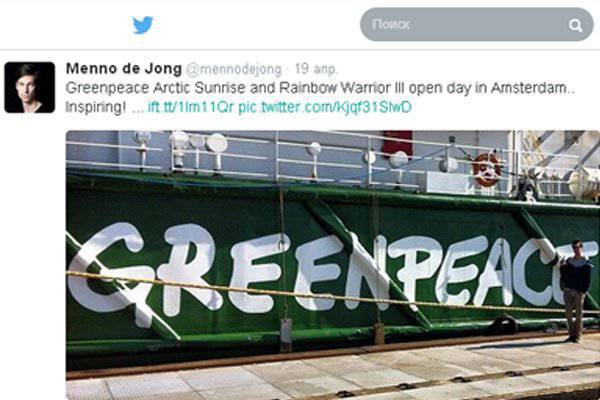 There is an opinion that this is not a simple coincidence, and that the “open doors” of “Greenpeace” can lead to “Mikhail Ulyanov” in a provocative plan, taking into account the interest that Greenpeace puppeteers show to the Russian exploration of the Arctic spaces and subsoil.

We must not forget that the Arctic shelf is not only energy. The Arctic is also the Northern Sea Route, the effective passage through which Russian icebreakers provide today. Since last year, merchant ships went from the North Sea Route from East Asia to Europe and back. The volume of freight through the Northern Sea Route, according to President Vladimir Putin, at the end of 2013, amounted to one and a half million tons. To have something to compare with: the daily trade flow of the Suez Canal can reach 4,8 mt. That is, the annual flow through the Northern Sea Route is a third of the daily record of the Suez Canal ... These figures, on the one hand, indicate that there is nothing to be proud of, but on the other hand, they give food for thought: what huge potentials for further There is a use of the Russian sea route in the Arctic Ocean. In order to realize these potentials, it is necessary, what is called, to carry out an advertising promotion of the Northern Sea Route with a calculation of the benefits that the owners of companies transporting cargo from East Asia to Europe and vice versa will have. Such promotion is conducted, but obviously not with the activity with which it is necessary.

So that, among other things, this activity turned out to be higher, Vladimir Putin proposed to create a special department, which would deal with the development tasks of the Russian Arctic segment, and also instructed the government to envisage financing the program in the field of socio-economic development of the macroregion.

It is necessary to improve the quality of public administration, decision-making - to do this, create a single center of responsibility for the implementation of the Arctic policy. I want to emphasize that we need not a cumbersome bureaucratic body, but a flexible, operatively working structure that will help better coordinate the activities of ministries and departments, regions of the Russian Federation and business.

We need to carefully consider how we will implement the measures of the state program “Socio-economic development of the Arctic zone of Russia for the period up to 2020 year” (the government program is prepared by the government) and ensure that it has the necessary resource content to solve the problems facing us in this area. I ask the Government to provide full funding for this program starting from 2017.

An important aspect of the Arctic is its potential from a military point of view. While the “partners” are carrying out plans to install an eurPRO directly in front of Russia, it would be strange not to use the Arctic macro-region to increase national (state) security, as it would be strange if the Russian Arctic were left unprotected from foreign encroachment (we remember the attack "Greenpeace" as the first and hopefully the last swallow).

Vladimir Putin:
... a major area of ​​work is integrated security of the Russian Arctic zone, I have already spoken about the military component. Oil and gas facilities, loading terminals, pipelines must be reliably protected from terrorists and other potential threats. Little things here can not be. All security issues need to be worked out in detail in the framework of interdepartmental exercises and training sessions, in which the units of the Ministry of Defense, the Ministry of Emergency Situations and other services must regularly participate.

It is also necessary to increase the reliability of the protection of our Arctic frontiers, including by strengthening the maritime component of the border group of the Federal Security Service of Russia. At the same time, the military infrastructure should be strengthened. In particular, we are talking about creating in our part of the Arctic a unified system of basing surface ships and submarines of a new generation.

Words about basing in the Russian part of the Arctic naval military units immediately caused a violent reaction from the "friends of Russia". Of all the points of development of the Russian Arctic segment, "Radio Free Europa" (structural subdivision of Radio Liberty) were the first to point out the point about the deployment of the basing system of the Russian fleet in the Arctic region. As they say, it hurts anyone ... At the same time, all attempts to find materials in the recent archives of the same radio station, for example, about criticizing the deployment of European missile defense in Europe were futile. "Freedom" - she is so free ...

There is only one conclusion: You just need to work actively, realizing the outlined plans, not forgetting that the goals of those “struck by Freedom” at all times contradicted the interests of the Russian (Russian) people. So, the saliva-sprinkling reaction of the “partners” should not mean anything to the state. The expression about a barking dog and a going caravan, though hackneyed, but in this case perfectly suitable.

Ctrl Enter
Noticed oshЫbku Highlight text and press. Ctrl + Enter
We are
Arctic: thawed or frozen?Russia is going to take away the right to the Arctic
Military Reviewin Yandex News
Military Reviewin Google News
22 comments
Information
Dear reader, to leave comments on the publication, you must sign in.