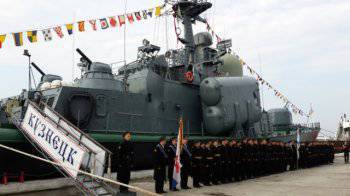 According to the "And MASH", at the main naval base of the Baltic fleet a ceremony was held at which the R-129 missile boat received a new nominal name “Kuznetsk” in honor of the city in the Penza region.

It is noted that the agreement on assigning a name to the boat will contribute to the further development of patronage relations between the city and the Baltic naval base. According to the old tradition, the crew for such ships is selected from the sailors who are called from this city.

Kuznetsk became the second missile boat, named in honor of the city in the Penza region. In April, the X-NUMX of the P-2012 missile boat received the nominal name Zarechny.

The main purpose of the rocket boat Kuznetsk of the 12411T project is the destruction of warships, amphibious vehicles and enemy vehicles, the strengthening of the air defense of transport groups, ships, torpedo and rocket boats, as well as their cover from the attacks of the enemy light forces.