As in the case of the victory of the Germans in the war, the USSR would be arranged 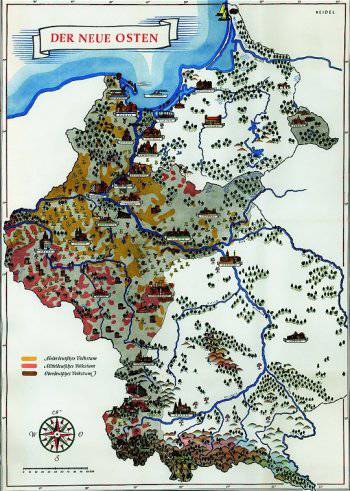 Soviet-Russian historians are still unable (or unwilling) to clearly explain how a post-USSR would have existed if the Germans had won the Second World War. They refer only to the notorious “Ost Plan”, which in Germany has never been an official document. But the Germans had several plans for the post-war reorganization of the USSR, but in practice they even created the party of national democrats and Leninist communists.


In the book “Russian SS” (publishing house “Veche”, 2010 year), historians D. Zhukov and I. Kovtun present several semi-official plans for the post-war (with German victory) the structure of the former USSR. Semi-official - because in Germany at the official level, none of these plans was ever approved.

Zhukov and Kovtun are a rare example of Russian historians who describe the situation, relying not only on Germanic documents, but also eliminating emotions. Historians in the book have repeatedly mentioned that many of their colleagues not only did not look at the archives (mostly writing off the same information from each other), but often engaged in frank lies in general.

As you know, the “Ost Plan” was developed under the patronage of the Imperial Commissariat for the Strengthening of the German Nationality (RKF). At the same time, its final version does not exist as a single document. All that scientists have today is 6 different versions of the document. Of these, 5 was prepared by the planning department of the RKF, and 1, a planning team from management at the RSHA.

Planning for a post-war organization in Eastern Europe and the USSR was also conducted in the Ministry for the Occupied Eastern Territories of Alfred Rosenberg and in the office of Hermann Göring, responsible for the 4-year plan (the so-called Green Folder). The development was also led by the Racial and Political Administration of the NSDAP. And each of the departments had their own plan for the reorganization of the occupied territories.

Thus, the plan was developed by the anthropologist professor Walter Gross. In November 1940 of the year, he sent a document to the SS on how to deal with the indigenous people of the occupied territories in the East: “To separate individual nations as much as possible. We will use immigrants from such nationalities as officers of the police and burgomasters. The fundamental question is about the training and, thus, the selection and filtration of young people. Parents who want to give the best school education should contact the SS and the police for this. The decision is made according to whether the child is racially flawless. 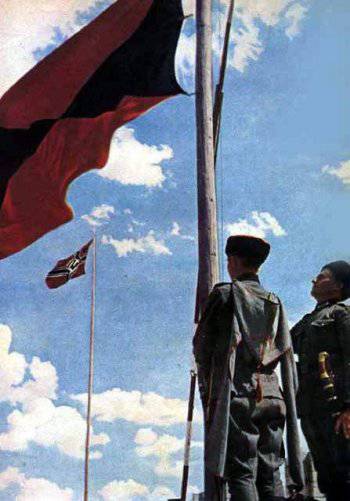 (The Cossacks raise the flag of their republic, the Cossacks, 1942 year. The Germans considered the Cossacks Oriental Goths and "full-fledged Aryans")

From the moment the child and parents arrive in Germany, they will be treated not as pariahs, but after they change their name with full confidence in them.

Over the coming decades, the population of the General Government will consist of the remaining local residents. This population will serve as a source of labor, supplying annual seasonal workers and workers to Germany for the production of special work. ”

In principle, the Germans carried out just such a policy in the past centuries in their colonization clusters in the East - in the Baltic States, in the Slavic countries of Central Europe - Germanized the best representatives of the autochthonous population, and considered the rest as a semi-right tax.

Conductor Nazi politics in the East should have been "Germanized intermediaries" - the Czechs. In this policy, too, there is nothing new: in the colonial countries, the white conquerors very often chose such mediators in the conduct of politics between them and the natives. For example, the British imported Indians into their colonies in that capacity (in South Africa, Malaysia, the Caribbean, etc.). The French in the North African colonies relied on local Jews.

In the same plan, the Poles were called "incorrigible" - in Germany they were sure that only a small part of them could be Germanized. But big plans were made for the Czechs. They were already considered "German Slavs." The Nazis noted the diligence and hard work of the Czechs and planned to make of them assistants of the German colonists in the East.

Another plan for the colonization of the East in May 1942 was compiled by the Institute of Agriculture at the University of Berlin and sent to Himmler. The colonization of the USSR was supposed to take about 25 years. Introduced quotas for Germanization for different nationalities. The overwhelming majority of the local population was proposed to be evicted from the cities to the countryside and used in large-scale agrarian activities.

To control the regions with not the predominantly German population, it was proposed to introduce a system of “margraves”. The first 3 such "margravos" - Ingermanlandia (Leningrad region), Gotengau (Crimea and Kherson) and Memel Narev (Lithuania-Belostok). In Ingermanlandia, the population of cities should be reduced to 200 thousand people. In Poland, Belarus, the Baltic States and Ukraine, the creation of 36 strongholds was planned, ensuring the effective connection of the “margraves” with each other and the metropolis. After 25, the “margraving” years were to be Germanized to 50%, and the strong points to 25-30%. 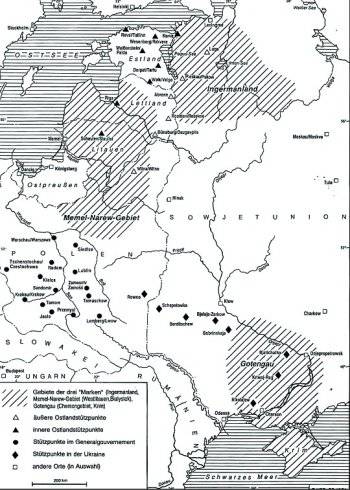 Another plan was drawn up by Dr. Wetzel in April 1942 of the year - for the office of Alfred Rosenberg. The plan proposed to leave 14 million Slavs in the spaces of the former USSR. They were supposed to put 4,5 million Germans under control. It was planned that these 14 million numb to the stage of the Czechs, and then completely become Germans. The rest of the Slavs should be sent to Western Siberia.

Wetzel, by the way, suggested exploring the Aryan qualities in the Slavs not on the basis of anthropology, but of social qualities. He believed that the Aryan characters in man were noble restraint, cold efficiency, moderation and composure.

In Wetzel’s plan, the role of intermediaries in the Germanization of the Slavs of the USSR was no longer to be played by Czechs, but by Estonians, Latvians and Lithuanians. “Since they learned at least the basic concepts of European culture,” the doctor reasoned.

Finally, in January 1943, Himmler’s office developed another plan, also semi-official (mentioned in Himmler’s conversation with Felix Kersten). Thematically, he looked like this: “When Bolshevism is eradicated in Russia, the eastern territories will come under German control along the lines of the“ marks ”that Charlemagne established in the east of his empire. Management methods will be similar to those with which England turned its colonies into dominions. After full restoration of peace and economic prosperity, these territories will be returned to the Russian people, so that they live in complete freedom, and peace and trade agreement will be concluded with the new government for 25 years. 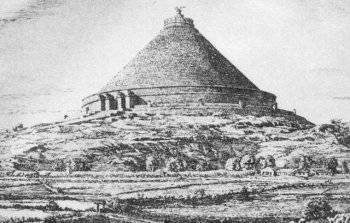 (Planned memorial to the fallen Germans. It was supposed to be installed on the bank of the Dnieper near Kiev)

Russia plays the role of an outpost in the decisive struggle against Asia, which will start sooner or later. The German-Goth Reich will come to replace the Great German Reich, the territory of which will stretch to the Urals. "

Thus, the Germans did not have any official plan for the post-war transformation of the USSR territory. The historians Zhukov and Kovtun also note that, contrary to the assertions to the Nazis plan to destroy the Slavs, which still exist even at the official level, such a plan is not found anywhere in the official documents of the German authorities. For clarity, we will accompany the situation with the semi-official plans of the Germans from the reality of the current Russian Federation.

When an employee of United Russia, Yegor Kholmogorov, offers to fight fornication by wearing a shirt and a sundress, this does not mean that his boss, Vladimir Putin, will clothe such a note in the form of a law or a government decree. Or when a member of INSOR, Igor Yurgens, proposes to abolish European civilization for the Russian people, this also does not mean that his boss, Dmitry Medvedev, immediately rush to clothe these thoughts in the form of a presidential decree. 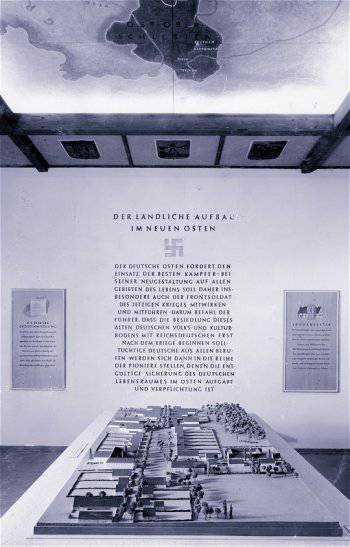 ("Eastern Village" - so it should look like in the occupied territories)

Finally, within the framework of the “Enterprise Zeppelin” (reconnaissance and sabotage body), some fundamentals of post-war life arrangement in the USSR could be seen even in practice. The Germans for the first time there began to allocate not "separate nationalities" of the USSR, but some classes and social groups. In particular, representatives of all anti-Bolshevik groups were supposed to become members of the “new Russia” a priori. They were sectarians of various kinds, adherents of the bourgeoisie, oppositional communists (Leninists and Trotskyists), former Tsarist officers, kulaks, Russian emigres, etc.

In "Zeppelin" even two Russian parties were created, which were to manage the "new Russia" in the occupied territories (the dream of the current Putin party about a two-party system in the Russian Federation). The first party received the name “Combat Union of Russian Nationalists” - in modern Erefian conditions this roughly corresponds to the now fashionable political trend of the so-called. “National democrats” (which was launched in 2007 by Navalny no. 0 Sergei Gulyaev from Stanislav Belkovsky’s Narodny movement. Navalny No. 1. By the way, there was also a political adviser in Navalny’s number 0 - like Zakhar Prilepin). Free labor, the elimination of foreigners as a brake on progress, scientific and technological progress, etc. A little later, a team of the Russian SS “Druzhina” was founded by the emigrants from this party.

The second Russian party created to control the occupied territories is the “Party of Leninists”. It consisted of anti-Stalinist communists — Trotskyists, Bukharinites, etc. Its full name was “People’s Russian Party of Socialist Realists”. Initially, the party was headed by the famous children's writer Korney Chukovsky, Caesar Volpe (he appeared under the pseudonym of Mentus Zykov ”).

However, members of the “Leninist Party” very quickly gnawed at each other, divided into several factions (Bukharinites, Trotskyists, Mensheviks, etc.). At the same time, each faction also wrote denunciations against each other to the German command.

As a result, the “party of Leninists”, instead of Korney Chukovsky’s son-in-law, was entrusted with leading the NKVD emissary, commander Ivan Bessonov, who surrendered to the Germans in September 1941 of the year. Bessonov, following the example of many communists, received the pseudonym “Katulsky”, and the party was renamed “Russian People’s Party of Reformists” by him. The deputy of Katulsky, Major General Alexander Budykho, even wrote two program works for the party: “The USSR and the World Revolution” and “What to do?”

The Germans reasonably decided then that the parties in Russia could be ruled, if not by themselves, so only the KGB (surrendered to the Germans). In principle, since then nothing has changed in the political system in Russia. 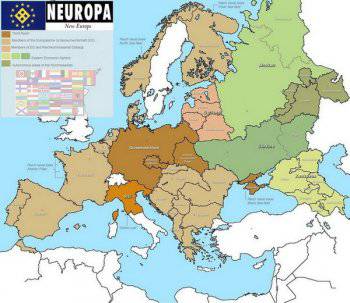 ("The Fourth Reich" in the view of modern neo-Nazis. The boundaries of tumors roughly correspond to how they should have looked in 1940-x)