Biden and Yatsenyuk against "gangster" Russia

April 23 2014
187
The internet shook again news about Ukraine and America. Joe Biden arrived in Kiev - this is if someone does not know or does not remember, the vice president of the United States. That same gentleman, whom the American ex-Secretary of Defense R. Gates called in his new book “talker,” who alone makes that makes mistakes. 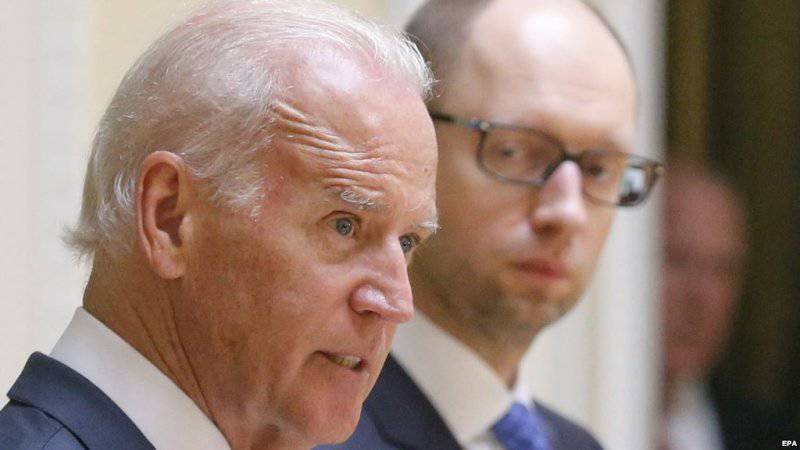 It turned out that the United States government decided to bestow a separate Ukraine with fifty million dollars. This money, as usual, will be spent on economic and political reforms. This was announced by the vice-president himself, who has been in Kiev since April 21.

In addition to fifty million for democracy, Washington will give Ukraine eight million dollars of "non-lethal military aid."

Wishing to support Ukraine, America will ensure that Ukraine receives a loan from the IMF.

Finally, the United States will help Ukraine to solve the problem with the provision of energy resources. (Not otherwise, they will start supplying shale gas.)

D. Biden explained to representatives of the new Ukrainian authorities that they have historical the opportunity to create a single country. Speaking with Turchinov, Mr. Biden welcomed the changes taking place in Ukraine, and explained that the United States was ready to help the Kiev authorities in every way along this path.

April 22 held talks with Prime Minister Biden Yatsenyuk. The vice president of the United States said that Russia could be in conditions of greater international isolation if it continued to support those who occupied office buildings in the east of Ukraine.

“No nation should threaten another country by locating its troops on the border and thus destabilize the situation with its neighbor. We want Russia not to support people who hide behind masks and wear military uniforms and seize buildings in the east of the country, and we would like to say that more provocative behavior of Russia will lead to greater isolation, ”he quotes. Interfax.

(Is that right? “No nation should threaten another country by deploying its troops on the border ...”? Why, does Washington unleash wars all over the world! What is there on the border? In Iraq, Afghanistan and Libya, how much did it cost? just on the borders - tseerushnikov bearded Islamists fighting against the Assad troops in Syria - what is this? And the whole “Arab spring”? And the introduction of the “fifth columns” in different countries subject to democratization - what is the name of the bombing and splitting of Yugoslavia? And separately - Kosovo? And remember the past? Latin American countries And the protracted “cold war” against the USSR together with the creation of a fascist international structure - NATO? Finally, let us recall the joy at the collapse of the USSR, which the “Belovezhtsy” reported in the first place not to Gorbachev, but to the US President!)

According to Joe Biden, Russia must "move from words to deeds." Representatives of Russia should join the OSCE mission, which are located in the east of Ukraine.

The US Vice President also stressed that the United States and the world community will never recognize the annexation of Crimea to Russia.

Biden promised that the United States would help Ukraine in holding open and transparent elections. And no one can question their results.

In fact, the elections in the United States — take even the most recent Obama’s — are being questioned by tens of thousands of Americans: here you have fraud with voting machines, and more than one hundred percent of votes for Obama in some districts, and the inability to vote for some voters, because someone has already voted for them, and so on. But no one, of course, can question the results of these elections - after all, the US has declared itself the benchmark of world democracy and has long taught the entire poor planet to this very democracy.

It seems to us that the former US Secretary of Defense R. Gates is right. The US has already made a mistake with the democratization of Ukraine - the Crimea broke away in its result. Now Washington is doing nothing more than developing its own mistake. But it’s not Washington who is to blame for the mistake - the Russians are to blame. Here you have the logic of Biden, and Obama too. We are dealing with a typical absurd propaganda, I mean the very "chatter", which was written by Robert Gates. And such propaganda is calculated on the utmost, God forgive me, stupid.

Yatsenyuk also made a promise to America: the Ukrainian authorities, in his words, will hold fair and transparent elections. As for the eastern regions, the speeches there, in his opinion, are supported by Russia and are aimed at disrupting the presidential elections. Yatsenyuk called on Russia to abandon "gangster" behavior, which is "in the modern world is not permissible for any state, and even more so for a permanent member of the UN Security Council."

As for the question of energy, the amateur prime minister said: “We need investments in our energy sector, and the best response to Ukraine’s energy dependence on Russia will be European and American investors here”.

Yatsenyuk also stressed that Ukraine is ready to consider the issue of joint operation and modernization of the GTS, reports Interfax.

According to Nikolai Bobkin ("Fund of Strategic Culture"), Biden is a developer of the technology of “color revolutions”, who believes that “the Ukrainian testing ground is no different from North Africa”.

The author notes that Americans "do not like to dream, they work everywhere according to a template, they pull their" democratic pattern "on the head of any nation." Also, the analyst notes that the Ukrainian government allows representatives of non-governmental foundations, organizations and employees of Western intelligence agencies to act. Most of the Ukrainian funds, the author writes, are funded by USAID, NDI (National Democratic Institute), IRI (International Republican Institute), NED (Democracy Development Foundation). As for the grants, they are issued, including the local US embassy. The international fund Vozrozhdenie (the brainchild of J. Soros) operates in Ukraine; it implements 500-600 projects (!) Annually.

Today, Ukraine is the object of the activities of non-governmental organizations that manipulate public consciousness. It is estimated that there are over 500 international NGOs in the country. And a significant part of them claims to define the worldview of Ukrainian society and state policy. The share of Ukrainians fell a difficult test to be tested by American democracy, the analyst states.

Ordeal! This is little said, add on my own. Even the USSR, led at the beginning of 90's by pro-Western leaders to a bright democratic future, could not stand the American test. The euphoria from the victory in the "cold war" is still circling the inhabitants of the White House.