April 23 2014
26
Revolvers are called weaponEquipped with a rotating drum, the chambers of which serve as a room for ammunition and barrel chamber. At the same time, the stem rigidly fixed in the frame does not have its own chamber. The main advantage of revolvers is the possibility of the next shot in the event of a misfire without reloading the gun. Also, revolvers are distinguished by their reliability in handling and comparative simplicity of design. The disadvantages of such weapons are large transverse dimensions, duration of reloading, as well as tight descent.


Today, revolvers under the pistol cartridge is quite difficult to compete with self-loading pistols. Any advantage of such a weapon can be obtained when using non-standard large-caliber cartridges for pistols. Since in our country special revolving ammunition was never produced, new cartridges began to be developed on the basis of a metal sleeve from a common hunting cartridge of 32 caliber. For a smooth-bore weapon it is the caliber 12,5 mm, for a rifled barrel - 12,3 mm. In Russia, several samples of large-caliber revolvers were created for this cartridge. 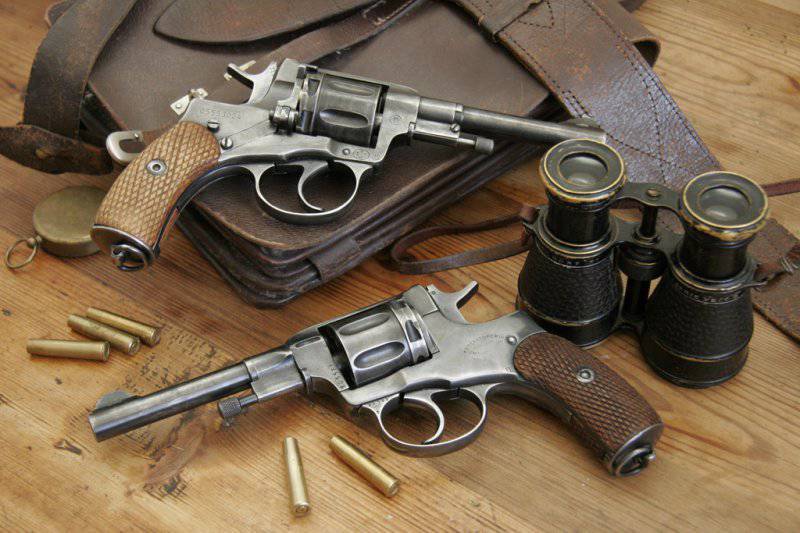 One of the most famous revolvers is the Nagan revolvers.
Revolver "Blow" (Klimovsk)

For example, the revolver “Udar” created in the Central Research Institute for Scientific and Technical Information Institute in the city of Klimovsk was distinguished by a rather archaic reloading scheme due to the removal of the drum. This scheme is found today, for example, in the supercompact revolvers of the company North American. At the same time in the American revolver its use was due to the desire to achieve minimum dimensions and maximum simplicity of design. In the case of Klimov's “Strike,” which was not distinguished by its miniature dimensions, this approach was controversial. As a possible reason for the implementation of such a recharge, there was a version that replacing the drum made it possible to switch quickly from the use of non-lethal ammunition to lethal ammunition, which would be convenient for police officers. The advantage of the revolver was the fact that a sufficient amount of ammunition for various purposes was created for it. At the same time, this revolver was not widely used.

A prototype of a new large-caliber revolver was presented by TsNIItochmash in 1993 year. Especially for it was created a whole family of cartridges caliber 12,3 mm, which were created on the basis of the hunting sleeve 32-caliber. A pistol powder charge was placed in the brass sleeve, and the KV-26 primer-igniter was used, which is similar to that used in the 9xXNNXX PM pistol cartridge. The use of large caliber allowed to create a whole range of different cartridges:

- a cartridge with a combat bullet of a stopping action, at a distance of 25 meters, it saved energy 49J;
- cartridge with armor piercing bullet. This bullet combined high punching action when it hit a rigid barrier (door, wall, glass, body armor) with a high stopping effect and a lower probability of rebounding. At a distance in 25 meters, a bullet could pierce a sheet of steel with a thickness of 5 mm;
- shotgun cartridge, equipped with steel shot;
- pyrofluid cartridge containing irritant (irritant fluid), covered with plastic wad. This cartridge is effective at a distance of up to 5 meters. Spraying a jet of liquid into an aerosol is already in the air, which reduces the likelihood of the shooter falling into the aerosol cloud, in contrast to the firing of traditional gas cartridges;
- the light and sound cartridge, which, at the moment of the shot, gives a powerful flash of light and a very strong sound, the combination of these factors disorienting the enemy, can disrupt the coordination of movements;
- cartridge with spherical rubber bullet of traumatic action;
- cartridge with a painting bullet. 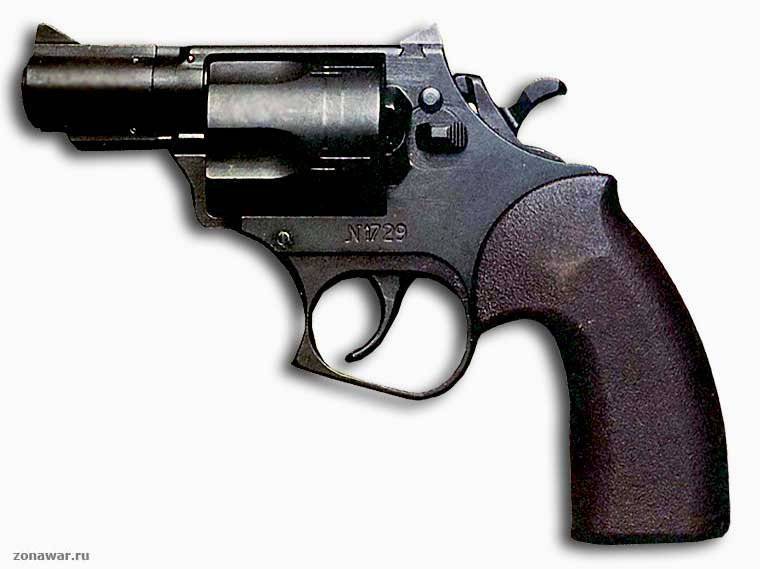 The design of the “Strike” large-caliber revolver is quite common - a solid metal frame, a tide box for a ramrod-axle, an open trigger with a knitting needle, comfortable handle cheeks made in the form of a molded plastic part. The classic appearance of the frame is broken only by the front ledge of the trigger guard, which is designed for firing with two hands. The main feature of the revolver is its replacement drum for 5 cartridges (12,3x35 mm), which is made together with the cleaning rod-axis. This revolver assembly is fixed in a frame with a latch, the levers of which are located on both sides of the frame. Squeezing levers, you can get the drum and replace it with a new one. In fact, the drum can be changed like a regular pistol store. With live ammunition, the drum weighs 380 g, with non-lethal ammunition its weight is slightly less. Dimensions revolver 174x44x136 mm, weight without cartridges - 0,8 kg.

The trigger trigger of the revolver "Strike" allows you to fire both self-platoon and with a preliminary cocking of the trigger. The revolver is equipped with an aiming device designed for a distance of 50 meters, although the effective range of the “Strike” is the 25 meters distance. The base of the front sight, which is beveled back, smoothly passes into the bar of the trunk. The balance and grip of the revolver are comfortable, but, like any other powerful revolver, it requires a trained hand from the shooter. When using live ammunition, the revolver surpasses the PM pistol by 1,5 by the accuracy of fire. When using a plastic bullet guaranteed to hit the silhouette of a person from a distance of 15 meters, three bullets in a row - from 5 meters.

In the famous Tula KBP, in 1994, on the basis of the P-92 revolver, its own large-caliber revolver was created, also designated “Strike”. The new revolver was made in the same way as the P-92, equipped with a one-piece streamlined frame, a double-action firing mechanism (you can shoot by self-arming or by preloading the trigger), tilted to the left by the drum. With a revolver, different-purpose cartridges of 12,3x40 mm were used, which were made on the basis of the brass sleeve of the 32-nd hunting caliber. 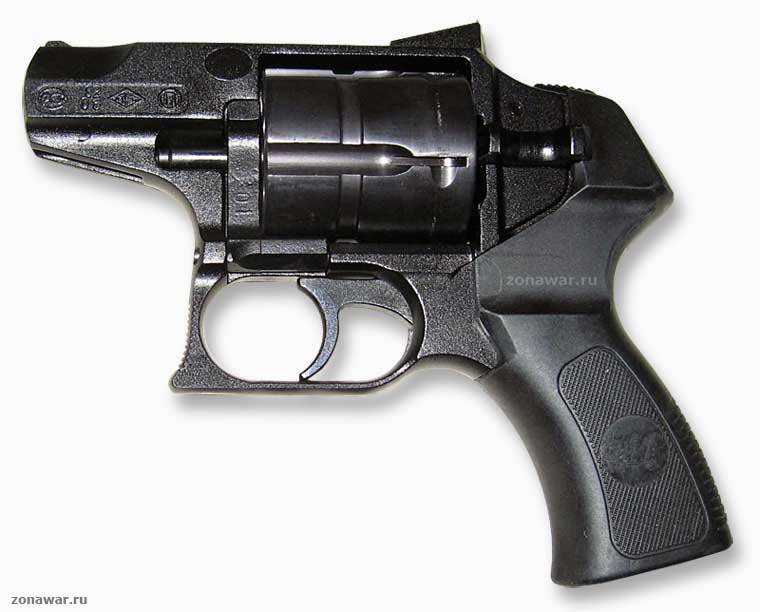 Externally and structurally, the revolver is very similar to the P-92, but was larger than it. Weapon dimensions were 173x44x136 mm. The capacity of the drum is 5 cartridges (for large-caliber revolvers, such capacity is standard, as with the 6 cartridges in the drum, the weapon greatly increases its dimensions). The drum of the revolver was filled with a special clip, which consisted of 2-x plates with special cutouts for cartridges. This holder also serves for the simultaneous extraction of spent cartridges. The weight of the revolver was 0,92 kg, which is not such a big value for such a powerful weapon.

On the basis of the Tula revolver, Udar, a service modification was developed, which used a special cartridge 12,3x22 mm with a soft lead bullet, which in its energy characteristics fully fit into the framework of the Russian Weapons Act. At the same time, this modification of the revolver could be used in situations where it was necessary to combine a small penetrating ability and a large stopping effect. A special training modification was also developed, with the help of which it was possible to conduct training of personnel. It was a kind of "paintball" option for professionals, it used marking bullets.

In Russia, another large-caliber revolver was created which was similar in design to the revolver from Klimovsk. It was a Dog revolver created by the employees of the Titan company and IzhSTU employees as a hunting and service weapon. The revolver was produced at the Vyatka-Polyansky machine-building plant "Molot". The reloading system of the revolver was the same as that of Klimov's "Blow", by removing the drum. However, if in the “Impact” a extractor was installed on the drum, then the “Dog” revolver did not have it either. However, such primitivism was due to the fact that such a concept was acceptable for a hunting insuring revolver, and the primitiveness of the design was fully justified by its simplicity. The fate of this revolver was ruined by the efforts of the Ministry of Internal Affairs, which interrupted his hunting career, transferring the revolver to the category of service weapons, where he had strong enough competitors. 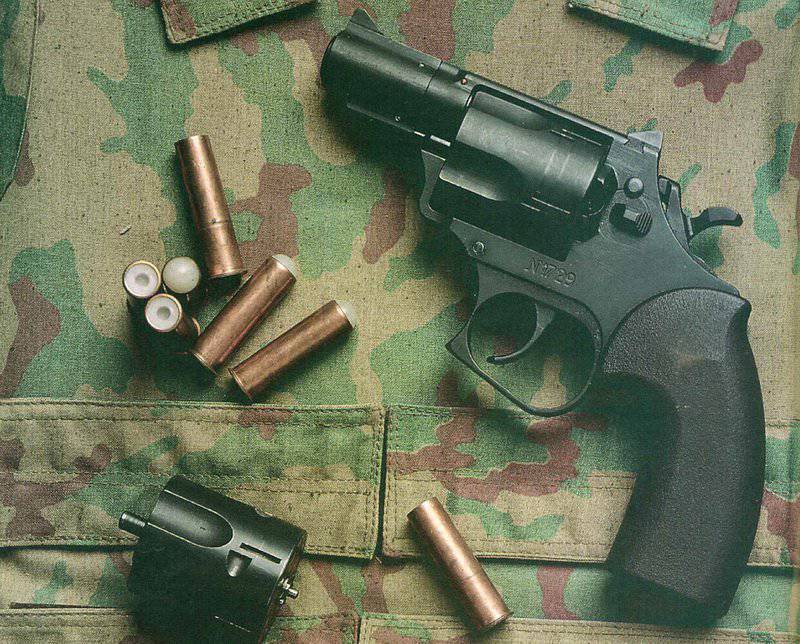 The smoothbore revolver “Dwarf” OTs-20 was created at the Instrument Design Bureau in Tula in 1994 by designers V.I. Seregin, A.N. Nevizhin and S.V. Zotov. The revolver was designed to arm the employees of the Ministry of Internal Affairs and private security companies with special tasks and conditions. The revolver was distinguished by high levels of operational reliability, as well as by a unique powerful striking effect, which is caused by the use of special ammunition. To the “Gnome”, as well as to the “Blow”, a whole range of special cartridges 12,5x40 mm was developed:

The 110 SC is an armor-piercing cartridge with a steel bullet of 11 g and muzzle energy in 900 J. Such a bullet has an initial flight speed of 400 m / s and is able to pierce a bullet at a distance of 50 meters standard armor element thickness 3 mm. This means that no body armor (up to and including the 25 class) can protect against this cartridge;

SC 110-02 - shotgun cartridge, in which 16 pellets of lead with a diameter of 4,5 mm and a total mass of 10 are located. The cartridge can be used when firing in difficult conditions, for example in the dark, to defeat group targets;

SC-110-04 cartridge, equipped with a lead bullet of mass 12 g and the initial speed of the bullet 350 m / s. By its stopping effect, this bullet surpasses the absolute majority of modern revolver and pistol bullets. 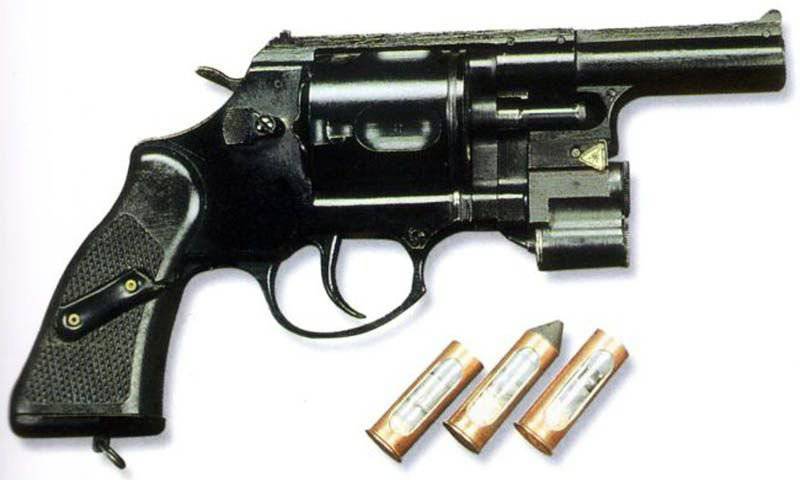