April 23 2014
109
The new domestic development from CJSC MCST - the Elbrus-4С quad-core microprocessor - is ready for the start of the mass production. At the same time, this processor is able to provide a level of performance that is comparable with modern microprocessors manufactured by leading foreign companies. Today it is the most high-performance processor that was created and will be manufactured in Russia.


It should be noted that CJSC MCST is the assignee of Moscow Center of SPARC Technologies LLP. The company began operations in April 1992. It was created on the basis of the department of the Institute of Fine Mechanics and Computer Engineering (ITM and VT) named after S. A. Lebedev - one of the undisputed leaders of the domestic electronic engineering. MCST is a Russian company with a 20-year history. At the same time, it has always attracted the attention of both Russian and foreign IT specialists with its developments.

The systems that were created by ITM and VT specialists were at one time the basis of domestic computing systems and resources. They found application in the most knowledgeable sectors of our society, which, of course, include nuclear energy, space exploration, basic and applied scientific research. Domestic supercomputers BESM, Elbrus-1KB, Elbrus-1 and Elbrus-2 are among the most well-known developments of the institute. There is no doubt that the Elbrus-4С microprocessors and the systems created on its basis will occupy a worthy place in this company. 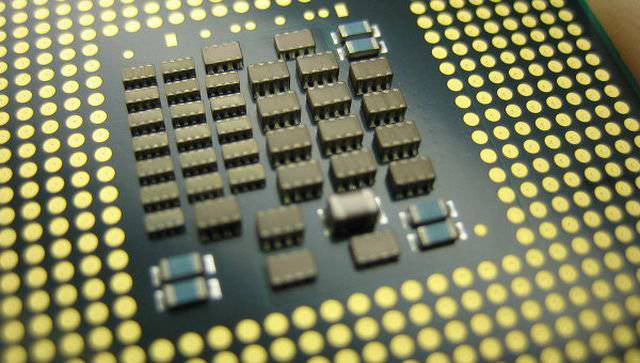 Today, the Elbrus-4С microprocessor is the most high-performance solution in the company's product portfolio. Elbrus-4С is a universal 64-bit microprocessor suitable for solving various computational problems. The processor contains 4 cores, which operate at 800 MHz, and supports the DDR3-3 memory channel 1600. Experts MCTS implemented the possibility of combining 4 chips in a multiprocessor system with shared memory. The quad-core Elbrus-4С is manufactured using the 65 technology of nanometers (nm), the average power consumption of the processor is only 45 W.

It is worth noting that, in terms of the manufacturing process, the Russian company is approximately 9 years behind Xenum-Xnumx. The most advanced Intel i8 and Intel i10 processors, built on the Ivy Bridge architecture, are manufactured using the 3 nm process technology. Technological process using 5-nanometer technology began to be used by the world's leading manufacturers of microprocessors in the 22 year, and such processors went into mass production in the 65 year.

The Elbrus-4С processor is a logical continuation of the line of microprocessors built on the basis of the Russian architecture Elbrus, which was created in the MCST. In one cycle, each core of a new microprocessor is able to perform 23 operations, whereas for microprocessors like RISC, this indicator is several times less. The Russian processor has advanced support for floating point operations. The total computational power of all 4-x processor cores is of the order of 50 gigaflops with single precision and about 25 gigaflops with double precision. The Elbrus-4С processors, despite the relatively small working clock frequency, are able to provide performance in many real-life tasks that is comparable with the leading foreign processors of foreign production, the same Intel i3 and i5, reports RIA News. 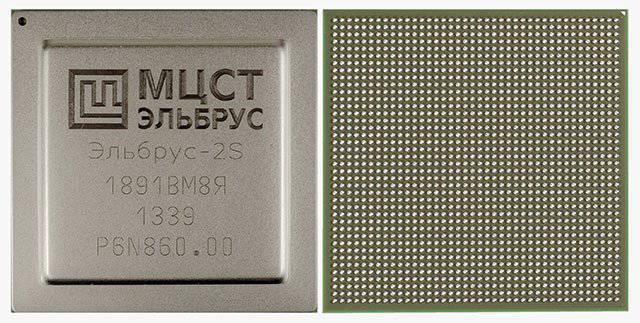 The working name of the Elbrus-4С processor was Elbrus-2S
Compared to the previous generation Elbrus-2C + processor, the Elbrus-4С architecture has been seriously modified to improve its performance: support has been introduced for Intel / AMD binary 64-bit translation (at the hardware level), the cache size has been increased memory, added support for binary translation in multithreaded mode. In addition, the memory subsystem has undergone a complete rework: a new standard for DDR3-1600 memory has been mastered, the number of memory channels has increased, the efficiency of the chip in multiprocessor systems has been improved. Also on the basis of the quad processor Elbrus-4С была a server was created that supports the 4 microprocessor and the 2 south bridge of the KPI, which are also developed by the MCST company.

A distinctive feature of all computing platforms that are currently being created at the MCST is a power of attorney: all key components, hardware and software, were created by the MCST specialists and possess a complete set of design documentation. Elbrus-4С processors can be the basis for creating a wide range of trusted Russian computing equipment: personal computers, servers, as well as embedded solutions. Employees of OJSC INEUM named after A. Gorky took direct part in the work on creating a new Russian processor and server based on it, as well as the necessary software. I.S. Brook ”, which is a key partner of CJSC MCST.

The new MCST processor is a logical development of the previous Elbrus-2С + processors, which were created in 2011 year. Like its predecessor, the new Russian processor is primarily intended for use in the military sphere, where the electronic component base of foreign production cannot be used due to possible malicious “bookmarks.” In addition, the new microprocessor meets the increased requirements of the duration of the life cycle in the area of ​​the working temperature range. Processors are well suited for scientific calculations and other work that requires a high level of protection against possible unauthorized access. However, the company does not exclude the possibility that computers equipped with an Elbrus-4С processor will be able to interest ordinary computer users. 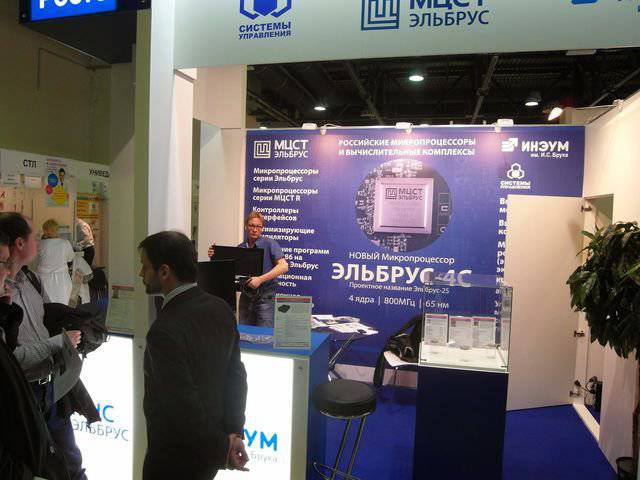 Especially for the new MCST processor, the specialists created their own operating system called Elbrus, which is based on the Linux kernel version 2.6.33. The composition of this operating system includes more than 3 thousands of software packages from the distribution of Debian 5.0, as well as a package manager. There is a full set of developer tools that includes optimizing compilers for high-level C, C ++ programming languages, as well as Fortran-77 and Fortran-90. There is a profiler, debugger, a library of signal processing and mathematical functions. At the same time, the Elbrus operating system has passed the certification procedure for the second class of protection against unauthorized access, as well as the second level of control over undeclared capabilities. It is also worth noting that on computers built on the basis of the Elbrus-4С processor, it will be possible to use modern versions of the Windows operating system as well as programs running under this operating system. This is achieved through the implementation of hardware support for binary translation of 64-bit codes from Intel and AMD.

For the first time, Elbrus-4С processors were shown to the public in March of the current year at the specialized exhibition “New Electronics - 2014”. About when it is planned to begin production of new microprocessors, has not yet been reported. Earlier in March, 2014, Russian Deputy Prime Minister Dmitry Rogozin, said that the improvement of the Russian electronic component base is one of the most important areas for the successful implementation of the state defense order, since possible sanctions from Western countries may hinder the rearmament of the Russian army. The modern quad-core Elbrus-4С processor is planned to be used on server hardware, as well as where it is necessary to ensure the replacement of foreign technologies in order to ensure the autonomy of work and the required level of secrecy.

At present, development work on the creation of new processors is continuing at CJSC MCST. In particular, in the framework of the program "Development of a heterogeneous microprocessor with a peak performance of more than 150 gigaflops", which will be built on the basis of high-performance 64-bit cores. The aim of this project is to create a Russian multi-core processor Elbrus-8С server class with the architecture Elbrus and intended for solving computing-intensive tasks and for building multiprocessor and multi-machine systems belonging to the teraflop performance class.

Ctrl Enter
Noticed oshЫbku Highlight text and press. Ctrl + Enter
We are
Computer history ElbrusThe results of the second stage of the joint antiterrorist exercise of the Ala-Too-Anti-Terror-2013 divisions of the CIS states
Military Reviewin Yandex News
Military Reviewin Google News
109 comments
Information
Dear reader, to leave comments on the publication, you must sign in.