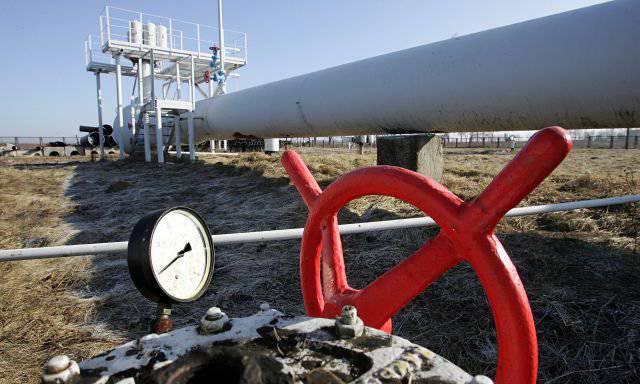 The US Senate may soon consider toughening sanctions against Russia, and first of all against the Russian gas giant Gazprom.

"I think now is the time to tighten the sanctions, whether against Russian petrochemical companies or Russian banks," said Democratic Senator Chris Murphy.

Moreover, according to him, the sanctions must be introduced, despite the fact that Europe will suffer.

At the same time, it should be noted that the US sanctions against Gazprom will not be able to cause serious damage to the company. The Russian company is primarily focused on European consumers; Gazprom has no common points of contact with the US gas market, so it is not clear what effect sanctions may have on Gazprom.

GAZPROM'S DEPENDENCE ON EUROPEAN CONSUMERS
Gazprom depends on European consumers more than they do on Russian gas, as the company supplies Europe about 90% of its exports in terms of value, and Europe buys only a quarter of the gas consumed from Gazprom.

In fact, in the current situation, Gazprom is hostage to the European market without a significant opportunity to reorient gas in other directions.

Moreover, the issue of reducing dependence on Russian gas was raised long before current events. In 70 and 80. Europe received 70% of imports from the USSR, and now only 41%. Throughout the 2000-x and 2010-x. shipments to Europe were in a state of stagnation: they fluctuated around the mark in 130 - 160 billion cubic meters. m per year.

An additional factor leading to a decrease in gas imports from Russia was the “shale revolution”, which brings additional volumes of gas to the market. This, as well as the development of the spot market in Europe, is increasing the supply of non-Russian gas through the competition of suppliers. Therefore, even without special measures, so to speak, in a natural market way, the share of Russian gas in Europe, apparently, would gradually be reduced.

However, Europe is not in a position to suddenly abandon Russian gas, since the region does not have enough infrastructure to transfer gas from other countries in a short time. The necessary import flexibility could provide liquefied gas. But the share of LNG in European imports is now 22%. Regasification capacity is not enough to quickly replace 130 billion cubic meters. m of natural gas from Russia. Therefore, the introduction of sanctions on Russian gas is technically unlikely.


Sanctions will only seriously hurt Gazprom’s positions if the European authorities decide to join this process, ignoring the economic damage. However, the likelihood of such a tough scenario is unlikely: no European politician will risk the fragile process of economic recovery in the region for the sake of the geopolitical plans of American partners.

1. OIL AND GAS PRICE GROWTH
Sanctions against Gazprom could provoke a rise in oil and gas prices. Even the American market, which is separate from the European one, seems to be insured against rising gas prices.

In the event of a significant increase in the cost of blue fuel, shale gas production can become profitable, which is good for operators' companies, but at the same time bad for consumers. The rise in prices in the domestic market is now hardly in the interests of the United States. Do not forget that it was the "shale revolution" that opened up access to cheap energy that significantly reduced the cost gap for industrialists between the United States and China.

As a result, many companies have revised their decision to transfer production capacity to China, and now they are experiencing a process of their return, which is important for the US economy. However, industrial sentiment may change if the US increases gas exports.


2. FAILED THE PROGRAM OF RESCUE OF THE ECONOMY OF UKRAINE
Rejection of Russian gas will almost instantly provoke a rise in gas prices in Europe.

In this case, the Ukraine project will be at risk, since Kiev will need far more funds to finance high gas prices. Attempting to once again raise the price of gas prices for end-users in Ukraine may cause a rise in non-payments, but more importantly and more dangerously, social tensions, since with declining incomes, the population of the country will not be able to pay for much more expensive gas.


3. REDUCTION OF THE SHARE OF THE DOLLAR ON THE GLOBAL MARKET OF RAW MATERIALS
The introduction of oil sanctions against Russia will create serious difficulties for the European market, but at the same time, the Russian gas giant will more actively reorient itself towards the east. Perhaps, even with the increase in revenues due to rising prices, which generally deprives sanctions of practical meaning.

What is more dangerous for the United States is that such actions may cause an increase in world trade in local currencies, which will reduce the dependence of these countries on the dollar. China is actively developing trade in national currencies, and Japan may eventually agree to similar measures, which is buying up gas at record high prices due to the abandonment of atomic energy.


4. BLOW ON POSITIONS OF GLOBAL OIL AND GAS CONCERNS
Despite the fact that Gazprom has quite a few points of intersection with US companies, at the same time there are a number of joint major projects in which major oil and gas concerns of the world are taking part, such as Royal Dutch Shell, Exxon Mobil.

Sanctions against Gazprom and other Russian companies can seriously hit the positions of world giants, deprive them of access to interesting Russian projects, such as Sakhalin-2. In the case of their forced refusal to participate in joint projects with Gazprom and other companies, their place will be taken by Chinese oil workers.

The geopolitical interests of the United States may be too expensive for large companies, it is easier to buy the opinion of senators and congressmen - it is cheaper than losing promising markets.


5. LOSS OF SUPPORT IN EUROPE
The participation of European politicians in the sanctions against Gazprom will cause gas prices to rise. The price increase depends on measures that Europe will take to reduce Gazprom’s share in the local market. If supply restrictions are introduced, then the countries of the region will face the question: where to get additional gas volumes?

At the same time, the Netherlands reported recently that gas production will significantly decrease, which is due to environmental reasons and an irreversible decrease in reserves, as the authorities of the country intend to maintain the volume of reserves to ensure domestic consumption as long as possible. And the cost of Norwegian gas will grow, as it is becoming more and more expensive to develop new reserves, and the UK, which is the largest importer of gas from Norway, plans to increase supply volumes to 30%.

At the same time, Qatar increases exports in the Japanese direction, where it can get almost 80% more due to the price when exporting the equivalent of 1 thousand billion cubic meters. m of liquefied natural gas.

In addition, Algeria is building up its own domestic demand, while it is also trying to maintain close ties with Gazprom for the implementation of future joint projects, and the volume of recoverable reserves in the country seems to have reached its maximum level.

The total amount of reserves in Algeria is about 4 trillion cubic meters. m, which is equivalent to 5-6 years of consumption in Ukraine or Turkey. That is, these reserves will not exactly solve the problems of the EU from a strategic long-term point of view.

Azerbaijan, although deeply involved in the opening of the Southern Corridor and supplies to Turkey and the EU through the TANAP-TAP pipeline system, has only 1 trillion cubic meters. m in the form of proven reserves with an increase in domestic consumption. That is, gas may be offered to Georgia, Turkey and even Greece and Bulgaria, but the country will not be able to supply it to the EU in the medium term.

Other major players, such as Turkmenistan and Uzbekistan, are focused on the giant Chinese market.

Europe may find itself in a rather difficult situation, with the result that politicians who have supported the United States may lose support, with the result that a number of major posts in Europe may be occupied by pro-Russian politicians or pragmatists who are not determined to support the United States to the detriment of their own interests.


6. LOSS OF GEOPOLITICAL INFLUENCE IN THE REGION
The geopolitical influence of the United States in the Mediterranean region may be under threat. Already at the moment, the Turkish authorities, extremely dissatisfied with the actions of the United States, began their own game, where a separate item is the tactical rapprochement with Russia. Moreover, the gas issue is the main way to bolster economic partnership.

A decision has already been made between the Turkish and Russian sides to increase the throughput capacity of the Blue Stream pipeline to 19 million cubic meters. m from the current 16 million cubic meters. Perhaps it will be decided to lay the South Stream gas pipeline across Turkey, in the event that the European authorities block its construction.

The loss of Turkey’s position for the United States will mean difficulties in the Middle East. Until the problem of Syria has been solved, it is fraught with Washington. In addition, the country that controls the straits to the Black Sea is very important for the USA in the current conditions.