15 2013 June
95
The situation near Leningrad in August 1941 was very dramatic for the defending Soviet troops. On the night of August 7-8, 4 tank the group struck in the area of ​​the settlements of Big Sabsk and Ivanovskoye, advancing towards Volosovo and Kingisepp. After 3 days of fighting, the Germans approached the Kingisepp-Leningrad highway. On August 13, the Germans managed to cut the Kingisepp-Leningrad highway and railway, as well as force the Luga River. On August 14, 41 motorized and 38 army corps of the Germans broke into the operational space and moved to Leningrad. On August 16, Narva and Kingisepp fell. On the same day, units of the 1st Army Corps of the Germans captured the western part of Novgorod, the threat of a breakthrough to Leningrad became even more real.


On August 18, Senior Lieutenant Zinoviy Kolobanov, commander of the 3 Tank Company from the 1 Battalion 1 of the Red Banner Tank Division, was summoned to the division commander, Major General V. Baranov. The headquarters of the tank division at that time was located in the basement of the cathedral, which was one of the attractions of Gatchina, then called Krasnogvardeisky. Kolobanov received the task personally from the mouth of Baranov. Showing on the map three roads leading to Krasnogvardeisk from Kingisepp, Volosovo and Luga, the divisional commander ordered them to be closed at any cost.

Kolobanova’s company had 5 tanks KV-1, each of them was loaded with 2 ammunition for armor-piercing shells. The high-explosive fragmentation cargo was low, the main goal of the tank crew was not to miss tanks to Krasnogvardeisk.

On the same day Kolobanov led his company towards the Germans. Two tanks, the lieutenant sent to the Ludsk road, two more to the road to Volosovo, and placed his tank in an ambush at the crossroads connecting the Tallinn highway with the road to Marienburg - the northern outskirts of Gatchina. Kolobanov personally conducted a reconnaissance with the crews of the tanks, giving instructions on where to equip positions, for each vehicle the senior lieutenant ordered to open two caponiers (main and reserve) and carefully disguise them. 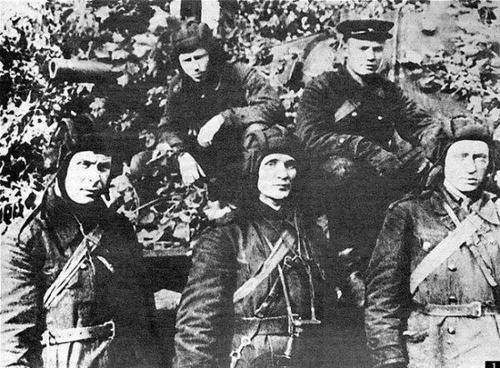 The crew of the tank Kolobanov, the photo was taken after the battle 19 August
Commander KV Kolobanov placed so that the longest and openest part of the road got into its sector of shelling. The road did not reach the nearby poultry farm for a bit and turned almost at a right angle to Marienburg. In one place, the road was crossed by a dirt road, apparently, the locals traveled along it during the haymaking. On both sides of the road there were unmade stacks, they were near the position chosen by Kolobanov. There were vast swamps on both sides of the road to Marienburg, in one place there was even a small lake with ducks floating on it.

All day long, tankmen were digging a caponier for their tank, and digging up the KV in a fairly strong ground was a difficult task. However, in the evening the tank was hidden by the ground right up to the tower. He prepared the crew and a spare position, after which he carefully camouflaged them, hiding even traces of tank tracks. Closer to the night, the infantry escort approached the tank, which was located slightly behind the tank, and the combat guard positions were also disguised.

Early in the morning of August 19, the crew of Kolobanov’s tank woke up from the intermittent hum of the German Junkers heading for Leningrad. After the planes went towards the city, peace and tranquility were again established at the ambush site. The sun was rising higher, the day promised to be clear and hot.

At about 10 in the morning hours on the left, from the side of the road to Volosovo, there was shooting, Kolobanov easily identified the KV tank weapon from the sound. Later, a message arrived on the radio that one of the crews had already engaged in battle with enemy tanks. On their own site was still quiet. Taking advantage of the moment, Kolobanov summoned the commander of the infantry escort and ordered him not to open fire on the enemy until his HF opened fire. Kolobanov noted two landmarks for his tank: the first is two birch trees at the end of the intersection and the second is the intersection itself. Landmarks for firing were chosen in such a way as to destroy the first tank at the intersection and not allow the remaining tanks of the column to turn off the road going to Marienburg.

The Nazis appeared on the road only in the afternoon, about two hours. Slamming the hatches, tankers prepared for battle. Soon the gunner, senior sergeant Andrei Usov, reported on what he saw in the 3 sight of a motorcycle with wheelchairs. Kolobanov, realizing that the enemy’s reconnaissance was in front of him, ordered him to miss it without opening fire. German motorcyclists quickly drove through the intersection, passed the tank standing in ambush and rushed to Marienburg. Fulfilling Kolobanov's order, the infantrymen did not open fire on them.

At this time, all the attention of the KV crew was riveted on the German tanks on their way. Kolobanov gave the order to the radio operator to report on the appearance of the German tank column, while he himself was looking through the road, on which German tanks, painted in dark gray, appeared one after another. The tanks went at reduced distances, substituting their left sides for the gun of an HF ambush, which could hit them as if in a dash. The hatches of some cars were open, the crew even saw the faces of German tankers, the distance between German tanks and HF did not exceed 150 meters. 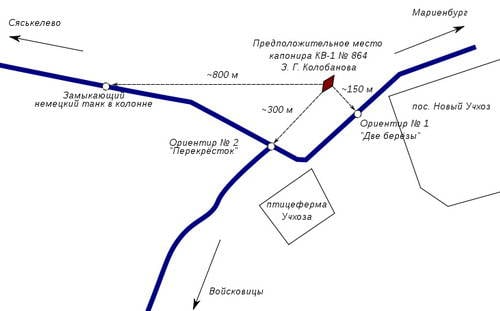 At this time, the battalion commander Shpiller came in contact with Kolobanov, who sternly asked the company officer why he was letting the Germans through. Shpiller already knew that there was a battle with the Germans on the Volovo and Luga directions in the morning, he also knew about the advancement of German tanks to the position of Kolobanov, and the long silence of the commander of one of his companies began to disturb him.

There was no time for Spiller to answer, the leading German tank drove into the intersection and came very close to the first target marked by the tank crews. At the same time, Kolobanov was informed about the number of tanks in the convoy, there were 22. When there were seconds of movement before the intended benchmark, Kolobanov realized that it was time to start the battle, and ordered Usov to open fire.

The first tank in the column caught fire from the first shot, it was destroyed even before it passed the intersection. The second shot was already destroyed at the intersection of the second tank. There was a traffic jam on the road. A column of German tanks that had already flown at minimal intervals shrank like a spring. Kolobanov orders to transfer the fire to the tail of the column in order to finally clamp it on a narrow tape of the road.

However, this time from the first shot to hit the closing tank fails, the projectile is torn, not reaching the target. Senior Sergeant Usov corrects the aiming and, after firing another 4 shot, destroys the last two tanks in the convoy. Enemy machines are trapped.

At first, the Germans do not understand where they are being shot from, and they start hitting stacks of hay, suspecting that tanks or PTO guns are hiding in them. However, they soon came to their senses and found a disguised ambush. The tank duel of our KV and 18 of the remaining German tanks begins. A whole hail of armor-piercing shells hits the HF, our tank is saved by the fact that it is dug into the ground and has additional 25-mm screens. After a while, there is no trace of disguise. Inside the tank, tankers are choking on powder gases and striking numerous blanks on their armor. Charging Nikolai Rodenkov works at a furious pace, driving into the breech more and more new shells. Gunner Usov does not break away from the sight, continuing to hit tanks in the German column. 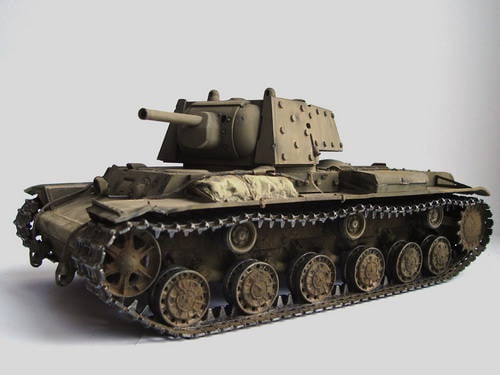 The Nazis understand that they have fallen into a trap and are trying to maneuver, but the shells fired by the Soviet tank hit them one by one. Their numerous hits almost do not cause KV any harm. Affects the marked superiority of the Soviet tank in firepower and thickness of the reservation. The infantry units moving behind the convoy came to the aid of the German tankers; under the cover of tank fire, the Germans began to deploy anti-tank guns on the road.

Kolobanov noticed these maneuvers in time and ordered Usov to hit the rifle guns with high-explosive fragmentation shells. In the battle with the German infantry enters the military guard, located behind the HF. Usov succeeds in quickly destroying one gun together with the calculation, but the second gun manages to make several shots. One of them smashes the commander's periscope sight, from which Kolobanov watched the battlefield, and the other disables the mechanism for turning the tower, making it stationary. In the end, Usov manages to smash this gun, but the HF almost loses the ability to maneuver the fire. Large turns of the gun to the right and left can now be performed only by turning the entire hull of the tank. In essence, KV Kolobanova turns into a PT-ACS.

Realizing that the Germans were well-adjusted to his position, Kolobanov orders the driver to withdraw the tank from the caponier and shift to a reserve position. In the eyes of the Germans, the tank, in reverse, gets out of its cover and drives off to the side, settling under the cover of bushes. The tank again opens fire on the column. At this time, the driver has to work hard, turning a multi-ton machine in one direction or another, by order of Usov.

Finally, the last 22 tank of the Germans destroyed. During the battle, which lasted more than an hour, Senior Sergeant Usov managed to release 98 projectiles against enemy tanks and anti-tank guns, of which all were used up. After the battle, Kolobanov counted more than 100 dents from German armor-piercing shells on his tank, but none of them could take the tank out of battle. Total 19 August in battle with a company of Kolobanov Germans lost 43 tank. For this outstanding performance, the battle, Senior Lieutenant Z. G. Kolobanov was awarded the Order of the Red Banner, and his gunner, Senior Sergeant A. M. Usov, was presented to the Order of Lenin. In this battle, Zinoviy Kolobanov surpassed the result of the famous German tank ace Wittman, who in the battle of Villers-Bocage destroyed the British 11 tanks.

Ctrl Enter
Noticed oshЫbku Highlight text and press. Ctrl + Enter
We are
Battle of tankman Kolobanova, made historyA hero who has not become a hero. Tank KV at the beginning of the Great Patriotic
Military Reviewin Yandex News
Military Reviewin Google News
95 comments
Information
Dear reader, to leave comments on the publication, you must to register.