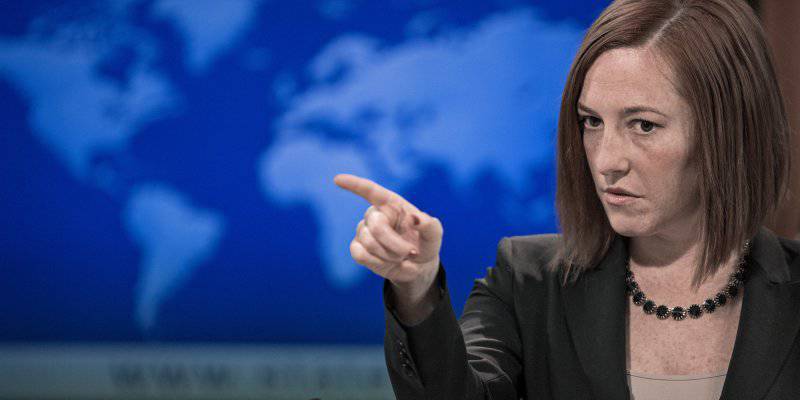 The utmost arrogance and unprecedented cynicism of American politicians have reached a critical point. Washington "does not notice" the conflict in Ukraine and considers the difficulties in the east of this country a temporary misunderstanding. Moreover, the US State Department claims that Russia, as always, is to blame for Russia: in the opinion of the United States administration, the Russians' speeches in Ukraine were provoked by no means by the maneuvers of the Ukrainian troops, but by spies from Moscow, which had already become talk of the town.

In her last speech on the cooling of relations between Russia and the United States, Jennifer Psaki, who holds the position of head of the press service for the US State Department, said that from her point of view, the events in Donbass are not at all a civil war and were provoked by Russian saboteurs. In this regard, the representative of America considers the operation in the east of Ukraine to be a reasonable decision: they say, the Ukrainian army is fighting not with the people, but with the insidious spies who have come from somewhere else.

But this is absurd, because even the Kiev authorities were forced to admit that only in the Donetsk region the number of rebels reached 10 thousand people! The true number of rebels, of course, higher, and taking into account those who did not get weapons and who does not directly take part in the battles, we can say that the entire population of Donbass has risen to fight the junta. I wonder if psaki realizes that no other country in the world has such a huge espionage army?

But that is not all. The head of the press service claims that Kiev in the current situation wants to ensure "peace and tranquility" in the region. And this is despite the fact that, besides the regular troops, militants of the Right Sector and the National Guard are massively arriving in the Donetsk region. If Kiev really was going to prevent a conflict, then at least it would not indulge extremist groups.

Based on the logic of American officials, armed confrontation between citizens of one country, caused by the deepest schism in society, is anything but a civil war. Yes, everything is exactly according to Orwell: “war is peace, ignorance is power.”

Jen Psaki fully endorses and justifies the actions of the Kiev authorities in the east of Ukraine. Say, a self-proclaimed government has the right to get up on the territory of its state whatever it pleases. And no one should interfere in the internal politics of the junta. There are double standards: perhaps Psaki should be recalled how her country began bombing Yugoslavia in 1999 due to Milosevic’s attempts to cope with Albanian militants, or how NATO attacked Libya when Muammar Gaddafi fought Islamic rebels. So why does America not want to stop the military operation of Turchinov and Co. in the east of Ukraine, as it has repeatedly done in other cases?

The answer is obvious: it is pointless to wait for justice on the part of the aggressor. After all, it was the United States who provoked the Maidan and actively supported it. The operation in the Donbas is the natural fruit of the recent “revolution”.

Again "the hand of Moscow"

However, the coup in Kiev did not remain without a trace for the United States: in Washington, the Ukrainian bloody hand syndrome, which now seems to be American politicians, was infected by Ukrainian colleagues in Washington. Following the leaders of the Kiev junta, American diplomats seriously argue that the latest events in Ukraine "are being played out according to the Russian scenario," and behind every corner in Slavyansk and Kramatorsk is hiding an agent from Russia.

It is in this vein that the last statement of Jane Psaki is sustained. According to her, “armed militants involved in the riots in Ukraine” are somehow connected with Moscow. “If the Russians and their supporters did not support provocations, the Ukrainians would not have to engage in promoting calm in those parts of the country where unrest occurs,” psaki summarizes.

Without finding fault with the words about “promoting calm”, as in Washington dubbed a military operation in the Donbass, one can say that the head of the State Department’s press service gives what is desired. There is no evidence that events in Ukraine were inspired by Russia. But there is a lot of evidence showing that Right Sector and other nationalist organizations are active in the Donetsk region.

In general, the American assessment of events in eastern Ukraine fully coincides with the official version of the Ukrainian authorities. The blame for the bloodshed in Slavyansk and Kramatorsk Jen Psaki fully lays on Russia despite the fact that all the events in Kiev and the Donbas took place without Russian participation. When a coup d'état was carried out in Kiev, none of his “customers” and “sponsors” inquired about the opinion of Moscow. When military units and units of the National Guard were sent to the east, Moscow protested. But now, when the civil war actually began in Ukraine, does Moscow have the right to confine itself to verbal statements? Is it time to move from words to deeds and prevent large-scale bloodshed in one of the largest and most populated countries in Europe?

Thus, the psaki charges against Russia are completely unjustified. Obviously, the head of the State Department’s press service speaks on behalf of the organizers of the Kiev coup, who are interested in presenting everything in this light, as if Moscow was to blame for everything. That is why the State Department is not engaged in politics, but in myth-making: the more countries believe in the mythical "Russian spies", the better for America.

Who is America cheating?

The idea that the uprising was provoked by Russia is focused on an “external consumer”. And this consumer is by no means Moscow: the Kremlin is well aware of the absurdity of Washington’s statements. The myth created by the American administration should take root in the leading capitals of the world. In the States, they want foreign representatives in the UN and the OSCE to believe in “saboteurs from Russia”.

However, the theses voiced by Jen Psaki, do not find adequate support. Only their NATO allies took the side of the United States, and even then not all: many states frankly do not understand why Washington unleashed diplomatic aggression against Moscow, and insist on a peaceful resolution of any differences within the framework of the existing diplomatic mechanisms.

It is especially important for America to get the support of India and China, who are skeptical about the idea of ​​isolating Russia. In Asian capitals, they are not well acquainted with the situation in Ukraine, since they have no political interests in Eastern Europe. Given the gaps in knowledge about this region, in Delhi and Beijing tend to believe the words of foreign experts - Russian and Western. Psaki tried to fulfill the role of such an “expert” by telling the “truth” about the events in Ukraine.

Of course, it was difficult to expect that the head of the State Department’s press service would describe everything as it really is. And abroad they understand this: foreign intelligence services and diplomatic agencies receive information from various sources, and the words of Jen Psaki can be easily refuted. Therefore, most likely, the United States with its lies will only scare off potential allies in confrontation with Russia.

But the United States will definitely try to use anti-Russian rhetoric as a pretext for the economic and diplomatic isolation of Moscow. Peculiar casus belli.

Of course, the United States in its striving to discredit Russia has lurked, and few will believe them, however, despite this, Moscow must be prudent and act proactively. It is necessary to draw the attention of the world community, and especially the BRIC countries and the G-20, to the fact of the American intervention in Ukraine. It is required to bring evidence of foreign intervention in the internal politics of Kiev: it is possible that someone who in the UN refrains from criticizing Washington will become the next victim of a creeping coup, fueled from outside. There are plenty of candidates, and the only problem is how to unite the efforts of all the opponents of America. Thanks to its military-political significance, Russia could well become the core of such a global union — an alliance of those who are not as aggressive as US policies, who want to live in a just world without lies and threats from the “big brother.”

That is why the words of Jen Psaki turned to nowhere. Everyone who could side with the United States has already done so. America cannot count on the rest: it can only be bribed and threatened to incline them to Washington. What, apparently, the United States in the near future and will be engaged.