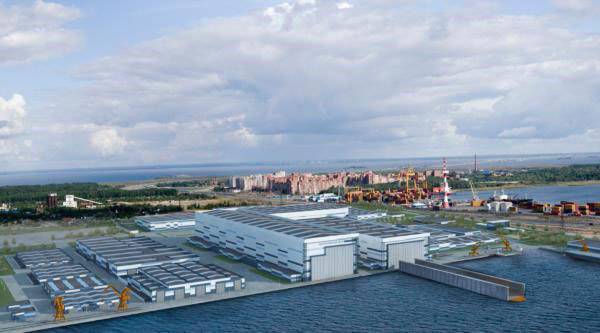 The reform of the Russian shipbuilding industry, its modernization and access to the modern technological level have been stalled lately. However, the reason for this hitch is not in crisis (the state is still able to allocate the necessary funds for the development of the industry). And not in the fact that Russian shipbuilders are allegedly unable to design and build modern warships and civilian ships.

The problem, first of all, is conceptual in nature: the government and the military have not yet decided which fleet they need and for what purposes. And the proposals on the part of both individual enthusiastic engineers and large industrial enterprises can only be of an advisory nature: although the product is specific, the customer still has to make the choice.

At the end of 2013, Delovoy Peterburg noted with regret that the project to create a new super-shipyard on the island of Kotlin worth 60 worth a billion rubles “made ends”. According to the publication, the orders that planned to load it in the future, will receive the Far Eastern "Star". In any case, Deputy Prime Minister Dmitry Rogozin told reporters during a visit to the largest shipyards in St. Petersburg - the Northern Shipyard and the Baltic Shipyard.

Speaking about the potential of Russian shipbuilding, Dmitry Rogozin said that the shipyards of the North-West will specialize in the manufacture of complex warships and an icebreaker fleetBut promising offshore projects will be concentrated in the Far East, where the Zvezda super-shipyard project in Big Stone, implemented by the United Shipbuilding Corporation (USC), is in the final stage.

But the Petersburg shipbuilders did not have time to worry about the fate of their industry and rejoice over their Far Eastern colleagues, as the project of the super-shipyard in the Primorsky Territory was in doubt. In December 2013, Dmitry Rogozin, at the regular meeting of the Marine Board, criticized the Ministry of Industry and Trade of the Russian Federation for the lack of precise dates for the construction of the shipyard and its order portfolio: “Almost no legal act reflecting the proposed reorganization of the USC structure in the Far East has yet been adopted.” That is, he cited almost the same arguments for which the construction of a similar super-ship in the North-West is being postponed.

Recall that back in August, Russian President Vladimir Putin instructed the federal government (specifically, the Ministry of Industry and Trade and the Ministry of Transport) together with USC, Rosneft, Sovcomflot and Gazprombank to submit proposals for creating a shipbuilding industrial cluster in the Far East. Now, as the Far Eastern media comment on what is happening, the construction of the Super Star "Zvezda" in the Big Stone has "stalled."

It is worth noting that the currently existing shipyards, which are entrusted with the task of "specializing in the manufacture of complex warships and icebreaking fleets," in the extreme need to modernize production. First of all investments are necessary. After all, if the enterprises maintain their current state at the expense of both Russian and export military orders, primarily Indian, then completely different means are needed for the purchase of modern equipment and technologies.

It was assumed that USC would invest the money simultaneously with the transfer of production to Kotlin. And on historical The shipyards, according to the Finnish recipe implemented in Turku and Helsinki, were planning to build residential complexes and commercial real estate, including to partially pay for the relocation. Now this project, most likely, will never be realized.

If indeed it is a question of changing the concept - which the professional community, unfortunately, can only guess at - then this is, as they say, half the trouble. Our engineers are ready for this; it suffices to recall the program for creating and using special ekranoplans for solving problems of ensuring national security.

Recently, she has been actively promoted by Oleg Volik, Chairman of the Association of Developers, Producers and Consumers of Ekranoplanes, based on samples created as part of the federal target program “Development of civilian marine equipment”. However, in all likelihood, in this case we are dealing with the proposals of enthusiastic engineers. Let me remind you that the proposal is to replace heavy nuclear cruisers with a cloud of ekranoplans - “mosquitoes”, on which you can place and deliver both conventional and tactical, and even strategic armament.

As we come to an important and deep topic - the creation of a modern maritime weaponsit is worthwhile to dwell upon it. Just a few years ago, there was a serious discussion among specialists about whether Russian enterprises are capable of creating such weapons at all, in particular underwater mines and torpedoes. The question was not idle, since a number of developers and suppliers after the collapse of the USSR found themselves abroad - albeit in friendly ones, but still in other countries. But it was not easy to replace them at the first stage, and even considering the then economic and personnel crisis.

Everyone also remembers very well the tragedy of the Kursk submarine: according to the official version, it was caused by the explosion of its own torpedo, either in the torpedo tube, or in the torpedo compartment (here the opinions of experts differ). In this regard, the question arose extremely acutely: will the Russian navy be provided with new modern underwater weapons, or this will never happen.

Many experts expressed doubt also because the case was entrusted to the natural monopolist in this area - the concern “Marine Underwater Weapon - Gidropribor”. However, the last 3 – 4 of the year showed that the specialists of the enterprise as a whole cope with the tasks assigned to them. The matter is not without problems - and it would be possible to list them for quite a long time, however, it is better to remember that only those who do nothing are not mistaken, and that the tight deadlines set for the company were initially simply unfeasible. And R & D and the creation of prototypes is a process that always goes on as usual, when it is often not possible to accelerate and even more so skip over several stages. In any case, the process of creating such weapons takes from 7 to 15 years.

There are serious problems with the creation and implementation of modern maritime communications and navigation systems. For example, even an existing GLONASS that has already been put into operation has such a cost that civilian shipowners use more affordable GPS systems instead. Of course, if there is political will and funds allocated from the budget, such problems do not arise among sailors. However, it automatically follows from this that all infrastructure costs are borne by Russian taxpayers, while the infrastructure of a foreign GPS system, by contrast, is funded by civilian consumers, including Russian consumers.

Serious questions also cause modern data transmission systems. If there are no problems with radio communication and transmission of short weather reports, then the need for packet data transmission where there is no cellular and fiber-optic communication (that is, in most of the territory of the Russian Federation) still baffles specialists. Not to mention the fact that the return of the military to the Arctic once again raised the problem of the non-passage of short waves in northern latitudes, almost forgotten from the 1980-s. All this, together with the issue of communication with submarines, is a serious challenge for the domestic military-industrial complex, but at the same time a wide field for the activities of Russian engineers and designers.