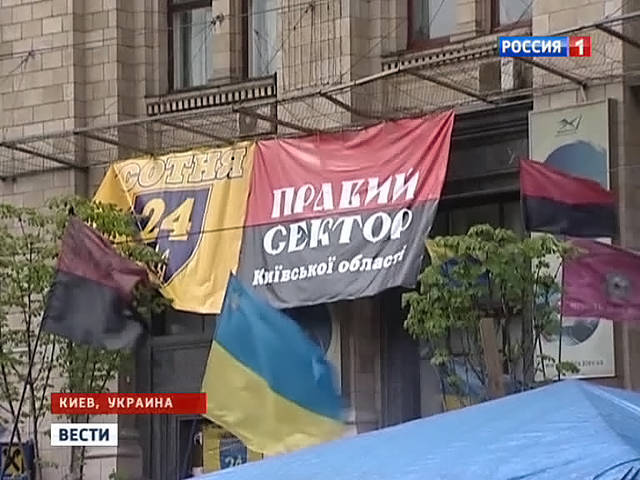 Force actions against supporters of federalization will resume in the near future. This was stated in the Security Service of Ukraine. The bellicose statement has traditionally coincided with a visit to Kiev of another distinguished guest from the United States - Vice President Joe Biden. He met with the current Ukrainian leadership, and promised to continue to provide full support. And today, in Kiev, the commander of the special company "Berkut" was arrested. He is accused of involvement in sniper shooting on the Maidan. Against this background, there were reports that the officers of the "Golden Eagle" Ministry of Internal Affairs are paying the "Right Sector" for the murder of Sashko Bilogo.

Flags in front of the Verkhovna Rada as a barometer of Ukrainian orientation, and Vice President of the USA Biden could not overlook this. The new authorities in Kiev immediately identified: Washington is waiting for support in the confrontation with Russia, and Biden promised it. Statements about this, and also about the readiness to ensure Ukraine’s energy independence, without specifying, however, how to recognize the presidential election of 25 in May, Biden made already after he met with representatives of parliamentary factions in parliament.

It is curious that not appointed Speaker Turchinov helped the Rade Biden to settle down, but the American ambassador Payette: pointedly pointed at the chair where Biden should sit down and introduced the local political elite, Vitali Klitschko, Petro Poroshenko (exchanged a couple of phrases in English), Sergey Tigipko.

The meeting with the appointed Prime Minister Yatsenyuk continued behind closed doors. But the general meaning is still clear. The Geneva accords to resolve the political crisis in Ukraine, where both parties must free the captured buildings and lay down weaponWashington treats the same way as Kiev, which is why the confidence of the Maidan radicals in their own impunity is only strengthened. No matter how hard the regionals tried to find advantages for the southeast in this flirting with the West, it did not work out.

In visits from overseas, journalists have already noticed a pattern: the Kiev authorities began a military attack on the rebellious east immediately after the secret arrival of the CIA Brennan. And now, when Vice President Biden met with Turchynov and Yatsenyuk, the SBU announced the beginning of a new active phase of the special operation. In Kiev, the radicals - as occupied by the building - and occupy.

According to US officials, the Ukrainian radicals, it turns out, hold occupied office buildings in Kiev on perfectly legal grounds - with the consent of local authorities, the government and the parliament, and even holding the relevant lease agreements. So supposedly it was with the captured and then burned down House of Trade Unions. Whether the destruction and arson of the building was spelled out in the terms of the lease agreement, the American officials did not specify.

The fact that the House of Trade Unions was burned by the Maidan militants was confirmed by the former commander of the Alpha special forces unit Chovgalyuk. During the interrogation at a meeting of the temporary commission of the Verkhovna Rada to investigate the riots.

To the question of the deputy of the Verkhovna Rada, Gennady Moskal, “Did you use weapons in the House of Trade Unions?” The former commander of the special division of the Alfa Security Service, Vladisir Chovgalyuk, responds as follows: "Only two warning shots were fired when the unit entered the roof of the House of Trade Unions building. There were a lot of bottles with Molotov cocktails on the roof, and it seems that two people were running around with weapons One of the employees made two warning shots at the wall so that the man did not use his weapon. The man ran into the technical hatch and set fire to the entrance. On the eighth floor, a stop was made so that the groups were leveled. about time already there have been some negotiations with the protesters - they were given the opportunity to leave, but they set fire again for a floor. "

Neither Washington nor Brussels accept such versions. He doesn’t see - not a rampant of radicalism, nor the fact that the election campaign takes place under conditions of tough pressure on undesirable candidates for Kiev. Today, Mikhail Dobkin, having already washed away from the greens that extremists have splashed out on him, presented a draft of a new constitution, where he proposed to transfer the maximum financial independence to the regions, and once and for all put an end to the language issue.

Nationalists, however, have already promised: the second Russian state will not happen. At the same time, the same national radicals, it turns out, are making deals with the authorities and law enforcement agencies. A group of hackers called "Cyberkurbut" posted on the network hacked correspondence Interior Minister Avakov with his assistant. For the murder of a militant Sashko Bilogo, the Ukrainian Ministry of Internal Affairs repaid the Right Sector with the arrest of the Berkut fighters. Blurts conditions and even called specific names where it is obvious that Yar - it Yarosh and Nalivaiko - chief of the SBU Nalyvaychenko.

Dmitry Brook: - Arsen Borisovich, worried about "golden eagles". I learned that Yar does not agree, he wants a 5-7 man and be sure to close their company company. He will not calm down, apparently, and we will be “milked” for Bilogo for a long time. The press is planned, and the materials for only two have been prepared, I know. Let the prosecution and other "golden eagles" prepare something or move everything for a day. I disturb, because the press should be warned in advance.

Arsen Avakov: - I know. With Nalivaykoy think of something. I will inform you. The date cannot be changed, but wait a while with the media. "Golden Eagles" give up. Yar will shut up. You press the mood correctly.

Avakov apparently managed to “tune up the press”: today, the deputy appointed prosecutor general again confirmed the findings of the investigation team that Sashko Bilyi had shot himself during a special operation. By chance. A few shots.