Sell ​​your own story 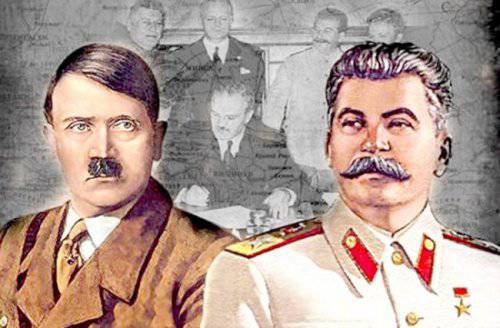 Soon we will be forced to believe that in 1941-1945 years, Stalin and Hitler fought against the West

A cynical but true proverb says that there are two main subjects in high school - история and initial military training. The second teaches how to shoot, and the first in whom.

It is the story, or rather, the underlying “myths” and “stereotypes” that determine the identity of the people. Moreover: it decisively constitutes this nation not as an eroded “cultural community”, but as a whole, conscious of its interests and able to protect them in toughening global competition.

That is why attempts to falsify history are more dangerous than espionage and sabotage: they destroy not military secrets, not economic infrastructure, but for the sake of which these secrets and infrastructure exist - national identity, without which there is no people, but the country turns into a “trophy space” waiting for its enslavement.

Our strategic competitors in developed countries understand this very well, and it is in this understanding that lies the main reason for the constant pressure on our history (and, therefore, on our ideas about ourselves) to which we are subjected.

The most vivid example is the sensational OSCE resolution, consistently putting Stalinism and Nazism on a par and, in essence, equating them to each other.

For the victims of the Russian education system, let me remind you that, despite the indisputable crimes of Stalinism, he did not carry out genocide on a national basis. Even the resettlement of peoples took place in better conditions - in particular, in the previously prepared villages, in better conditions than existed in areas destroyed by the war. The regime did not wage wars of conquest: even the war with Finland began after the Finns refused to exchange territories, to push the border away from Leningrad on the eve of a major war, and entered Poland only after the Polish army and statehood itself ceased to exist.

The treaty with Hitler, after which Stalin jumped for joy, shouting "Deceived Hitler!", Was nothing more than a forced reaction to the Munich Agreement and Germany to embrace Germany in the Soviet Union.

Do not forget that the total number of victims of Stalinism, as shown by studies based on archival data, and not personal tantrums, is overestimated by times, and sometimes tens of times.

Interestingly, Stalin's professional accusers, as a rule, mysteriously forget about his main, real fault. This fault lies in the fact that the vaccination of fear and violence that he made to our society, has beaten off the entire people and, in particular, from its elite, the ability to take initiative, which has undermined its resilience and ultimately led to the destruction of Soviet civilization. Roughly speaking, “the system created by him gave birth to Gorbachev”.

After equating Stalinism and Nazism with a “brainwashing” stage, Russian society will be explained that, since in 1939, Stalin and Hitler agreed with each other, they fought together in 1939-1945 against “all civilized humanity” and suffered defeat from the united forces of the United States, Britain and France. However, the Germans repented of their crimes, but for some reason the Russians did not. And so the Russians should repent, repent and repent, pay contributions and reparations similar to German ones, and most importantly forget about the right to any national interests of their own.

Yes, today it looks wild. But no more wildness than a generation ago looked like equating Stalinism - with all its crimes - to Nazism.

The author of these lines in 2001 had to hear at international conferences statements that Russia had always played an extremely negative role in the history of Europe. When one of the authors of these statements (by the way, the German) was reminded of the victory over fascism, he already calmly declared that the role of the Soviet Union in this matter "should not be exaggerated."

An equally important, though unknown to the Russian public element of the West’s position is UNESCO’s fundamental refusal to recognize the blockade of Leningrad as an event of world historic significance. The explanations of international officials are touchingly simple: they already have big problems with the Poles because of Auschwitz located on the territory of Poland (whose operation is recognized as such a fact) and with the Germans in the whole history of World War II, and to aggravate relations blockade of Leningrad they are simply not interested.

The Russian bureaucracy agrees silently in a rag.

Meanwhile, connivance in this matter may well lead to the fact that our children will be forced to teach that the blockade of Leningrad was a crime of the Stalinist regime, and valiant German and Finnish troops, to the best of their ability, provided humanitarian assistance to the victims of communist terror!

This seems ridiculous and absurd only at first glance. I talked with fully formed, adult 30-year-olds who already have children, who sincerely do not believe that the Soviet Union was the most reading country in the world. Just because reading is good, but “what good can be in the scoop and under the communists”?

The most interesting thing is that, in spite of individual screams and the “commission for combating history falsifications”, which can easily turn into a “commission for falsification”, the ruling bureaucracy as a whole supports and stimulates oblivion of the history of our country.

For a very simple reason: no matter how ineffective our state was in the past, no matter what crimes its representatives committed, it was always - both with the tsar and the communists - it was a normal state, striving for the public good.

Yes, this “public good” itself was sometimes understood in a surprisingly perverse way - however, it was attempted to be achieved.

The statehood created in Russia, as far as can be judged, fundamentally rejects the very idea of ​​“public good”, replacing it with the idea of ​​personal enrichment of officials.

Therefore, the effectiveness of the modern Russian state from the point of view of society cannot be compared with the efficiency of the most heinous and ridiculous regimes of our past.

And so that no one has not only the desire, but even the ability to make such a comparison, we must make people forget their past.

Turn Russia into a country of mankurts.

Author:
Mikhail Delyagin - Director of the Institute for the Problems of Globalization, Ph.D.