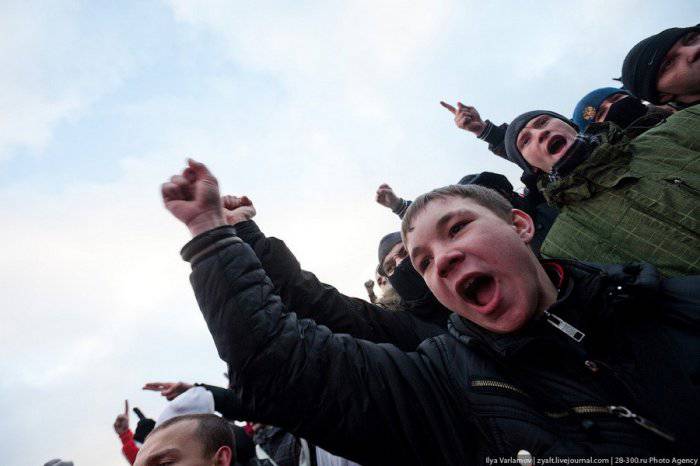 The beginning of 2011 was marked by over-fulfillment of the world plan to overthrow dictators: Tunisia, Egypt, Côte d'Ivoire, and recently also the Syrian leader agreed to resign. The whole Middle East was overwhelmed by a wave of violence, and in different countries we could observe its various manifestations. The most painless power changed in Tunisia. The Egyptian version, despite its cruelty, simply fades against the rest of its neighbors.

Until now, conflicts smolder in other states: Libya, Jordan, Yemen, Bahrain. Dying a violent death in this part of the world is now more than ever. On the other hand, the eastern world never valued human life.

Quite predictably, these scenarios are being tried on in the post-Soviet space. It should be noted that the problems of the Middle East and Russia have many similarities between themselves: the raw material orientation of the economy, the lack of productive structural reforms, the infringement of the rights and freedoms of citizens, cronyism, the most serious stratification in the incomes of the rich and the poor. The old conflictology axiom has been confirmed: the longer the suppression of contradiction takes place, the stronger the social explosion will be.

Whose shirt is closer to the body?

Russia is no stranger to revolutions and various kinds of riots. Only for 20-th century there were at least three, or even four (it depends on how you count), but none of them brought happiness to this land. On the other hand, the Russian people will never mind violently throwing off their caps on the ground and tear off their shirt on their chest.

The Tunisian scenario, when the national “chosen one” found it best to flee, would be too pleasant a picture for Russia. Alas: the Russian oligarchs, whose capital for the most part are abroad, are unlikely to be so merciful to the rebellious crowd. It is possible that an unequivocal order will be given: to shoot to kill, having christened all the demonstrators by extremists.

The Egyptian version, a bit more rigid, is also not suitable for Russia. Whatever you may say, our armed forces are not some kind of third force: they are a priori on the side of power. Yes, and Red Square, no one will provide as a springboard for riots. All dissatisfied will be taken from here for 101-th kilometer in 24 hours.

There remains only one option - the Libyan, and such a war does not bode us any good. It is impossible not to note the many similarities of Libya and the Russian Federation: the actual irremovability of power, the raw material orientation of the economy, the reputation of a rogue state in the world, unpredictable and dangerous. In Libya, as in Russia, residents of neighboring countries went to work. And the power of Gaddafi is much stronger than his fellows in misfortune. Unfortunately, a protracted war in this country is more likely to play into the hands of the world community. Too many problems can be solved at its expense.

You can talk endlessly about the orange revolutions of the beginning of the 21 century, but they did not bring anything good to the states where they occurred. Only Ukraine can be put in a positive example, and not everyone will agree with this statement. Yushchenko was able to implement several reforms, but because of the conflicts within the coalition, they did not bring a serious result.

We have to admit that Russia is too fertile ground for various kinds of upheavals and riots. The people are driven to despair: the media image very clearly reflects the life of the “elite”. Endless luxury, yachts, plastic surgery and huge palaces.

Many simple people have nothing to lose. However, drawing parallels between similar developments, we must say a few obvious truths. The revolution in Libya began after waves of protests swept through Egypt and Tunisia. The analogy is obvious: rebellious moods can be exported to Russia from neighboring Belarus, Kazakhstan, Kyrgyzstan, Armenia or the Baltic countries, where the situation is very tense. In this case, the Libyan option is not only possible, but also inevitable.

The logic of Russian revolutions is such that it wants not to transform the previous system, but to completely destroy it. It was already so far back in 1917: the Bolsheviks did not want to keep alive a single member of the royal family.

Now, probably, there is no doubt why Putin so vehemently began to block Gaddafi and turned into a kind of attorney colonel. He also tries on the Libyan scenario on Russian soil and sees a huge number of similar features.

It is impossible not to note one remarkable fact of all revolutions of the sample 2011-th year. These are media riots, far more menacing and merciless than the orange revolutions. Recall that in the 2004-2005 year, social networks did not enjoy such popularity as in 2011-m: now the number of adherents of such sects as VKontakte and Twitter (and the like) is counted by tens of millions of people. Each of them has a family, so the level of information coverage is even wider.

If in Russia they begin to filter the Internet, you should know: the next revolution is not far off.