Government report with elements of planning: from reunification to optimization

April 23 2014
43
On Tuesday, April 22, a report of the government of the Russian Federation was held before the State Duma deputies on the work done during the year. If we compare it with previous similar events, then the current report can be called carrying considerable volumes of highly resonant information. And if Russians have already got used to the resonant tone of some State Duma deputies who can afford to say the first thing that slips in their heads in the form of a similarity of thought, Russia has forgotten about informative speeches of the head of government. Only here was the performance truly informative or just wanted to be so? - the question ... 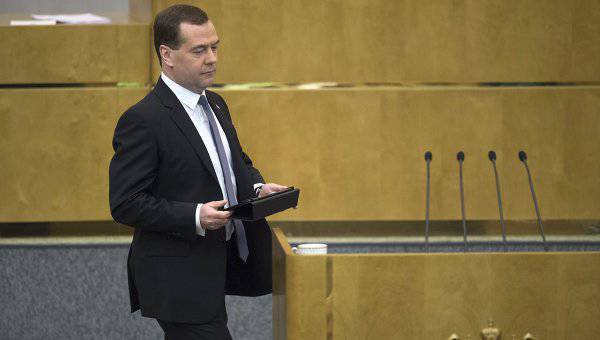 Recently, in general, I managed to get the impression that the Russian government is a kind of structure that is closed to all locks, which is brewed in its own juice, having a minimum number of intersections with the interests of its own people. And at times, such an impression was created that a number of government officials of the current convocation have a strange footnote in their official duties: do not be zealous with efficiency.

But the speech of the Prime Minister turned out to be completely built up to prove that in fact he heads the best cabinet ministers for all the years of the existence of the Russian Cabinet of Ministers in general. And the words sounded like that, which was really tempting to believe Dmitry Anatolyevich, chasing away from me the idea that there are no indispensable in the government. Someone believed, some did not ...

The Government Report is happening for the sixth time already. I consider this practice both useful and justified, because only in dialogue can we achieve maximum efficiency of work and make our joint work understandable for the absolute majority of people.

It turns out that the government is well aware that most people do not understand the actions of the government. That is, the government seems to be working, and working, judging by the Prime Minister’s further rhetoric, it’s very good to have a dacha, but only the people in Russia are dark enough to realize the indispensable use of such work ... And, apparently, to be understood by the absolute majority of people Dmitry Medvedev decided to use the informational “flash” methods during his report. With these flushes, the first minister (as Vladimir Zhirinovsky called Medvedev) drew attention not so much to the government’s work for 2013 for the year (or rather diverted it from it), but to those decisions that were either made just or in the future.

So, let us touch on those statements of the Prime Minister, which caused a resonance in public opinion, judging by the abundance of user comments in the sections of the media and social networks.

One of the statements by the chairman of the government concerned his plans regarding the size of the state apparatus. Dmitry Medvedev, for some reason having forgotten that he seemed to have come to the State Duma to report on the work done by the government, suddenly spoke frankly about some remote or close prospects. Applying one of his favorite terms “optimization”, Dmitry Anatolyevich made him nervously fiddle around in his chairs with some of the officials in the government box. The prime minister said that 10% of government officials could be reduced.

This possible reduction of the prime minister connected with the need to create an effective state apparatus, oriented, as he himself said, to the demands of the people. In general, the proposal looks quite reasonable: the reduction of the army of officials, the economy of considerable amounts of public funds, the elimination of bureaucratic barriers. However, this raises at least two questions. First: on whose particular requests has the bureaucracy been oriented so far? Second: what prevented the creation of an effective state apparatus before? And as an addition: is it worth it to assume that the prime minister recognizes the current bureaucratic apparatus as ineffective?

Dmitry Medvedev (the text version of the report before the State Duma represents Russian government website):

Foreign citizens who come to work on such (unskilled - “VO”) jobs, we need them, but they must be adapted to life in Russia. They must speak Russian. They must conform to our traditions and not impose their habits on the locals. And this is already the task of the FMS, this is the task of other state structures - to deal with these issues.

“Must” is again, well, great, but what does this have to do with the REPORT ON THE PROGRESS WORK. Now, if the head of government said that the FMS had solved its task: migrants from Tajikistan, Uzbekistan, Kirghizia and other republics spoke Russian in full, integrated into our cultural environment and began paying taxes to the treasury of the Russian Federation without creating dumping problems labor, then the government is an indisputable plus. And so the phrase that we need foreign citizens gives us some significant strangeness. Who are we? Why exactly are needed? Do you need your own citizens in this case? ..

During his “report”, Dmitry Medvedev promised to “show his teeth” to foreign markets, if foreigners began to place barriers for distribution in the mentioned markets of Russian goods. And here, too, everything is correct. But still, for a start, it would be nice for the government to think about how to open the domestic market for Russian goods.

With all the positive changes in the decline in the share of imports in food products, individual producers (farmers, owners of private households) still do not have the ability to supply their natures-product to the table of an ordinary Russian without squeaking (without a system of numerous resellers). Giant retail chains have done everything so that the farm-to-counter chain grows to unimaginable sizes, leading to an increase in the price of goods.

This also includes the premiere concerns about the investment climate. The climate really leaves much to be desired. At the same time, the government for some reason continues to rely on some foreign "money bag" from which the "good uncle" will invest in the Russian economy. And despite the fact that inside Russia the number of own bags is no less than where the investment is expected from. Only often do these “bags” work in the mode of reverse functioning: money earned on the potentials (energy, industrial, banking) of Russia is quietly taken abroad without any counter-action by the government. And if we take into account the ever-increasing burden for small business representatives inside Russia, then actions to improve the situation should not be announced, but should be implemented here and now.

Against this background, the prime minister continues to believe that the ruble will soon become a reserve currency. Believing is necessary, but faith alone is not enough. By the way, the first mentions of the ruble by Dmitry Medvedev as a possible reserve currency were recorded when he was president (or acting president, as Vladimir Putin called Medvedev during the direct line). Since then, more than five years have passed, and so far it has not been possible with the ruble. If it does not work, then why talk about Napoleonic plans for the national currency? It is better to calmly create the conditions for the attractiveness of trade in rubles. In the meantime, we buy and sell almost everything ourselves in US dollars, then the words about the ruble as a reserve currency sound either cynical or simply naive.

We present a small selection of proposals and statements of facts from the prime minister, which he voiced during the "report".

The exchange of sanctioned “blacklists” is an absolute dead end.

Medvedev:
Foreign partners have disconnected some Russian banks from international payment systems. It is necessary to spend forces and means to bring to mind the relevant foreign counterparties.

Medvedev:
As before, there is a discussion: whether it is necessary to raise the retirement age. I believe that we should not follow this path.

Medvedev:
Our relations with Belarus and Kazakhstan will reach a new level of integration, the preparation of a treaty on the Eurasian Economic Union is being completed. I hope that in the near future it will be finally agreed upon and signed at the level of heads of state. And in the near future, the number of participants in the Eurasian integration cooperation may be expanded at the expense of Armenia and Kyrgyzstan, which are already in the advanced phase of the negotiation process.

Medvedev:
Our country this year has become more. This is unique историяAnd this story gave us an exceptional chance to establish a comfortable and decent life in the new regions of the Federation, both in the Republic of Crimea and in Sevastopol, while continuing to develop all other regions, all other cities and villages of our country.

PS Prior to the beginning of the report, the government canceled its decision on the introduction of social norms in the housing and utilities system. But this already gives reason for modest optimism: does the sound of the modest opinion of ordinary citizens in our government break through through the fanfare of the ministerial plans ...

Ctrl Enter
Noticed oshЫbku Highlight text and press. Ctrl + Enter
We are
Results of the week. "God forbid to see Russian revolt, senseless and merciless!"Results of the week. "Of course, he is guilty, but he ... is not guilty ..."
Military Reviewin Yandex News
Military Reviewin Google News
43 comments
Information
Dear reader, to leave comments on the publication, you must sign in.