Village and food security of Russia

April 23 2014
108
Thanks to Western sanctions! Although it is a sin to say this in our times, but indeed, if it were not for the West’s talk about the need to incinerate Russia at the sanction level, then God knows how many more years we would (not to mention the Russian authorities) they looked at such issues as financial, technological, energy, food and other security of the country.


If it were not for the systematic “partner” horror stories that Russia, for its own position in the international arena, will be pressed in all directions, the majority of Russians would continue to believe that increased attention to strengthening national (state) security is something like paranoia that needs to be treated, because Russia has no enemies. Now the enemies can be seen literally every hour - it is painfully active that they rush to the air of the world media to demonstrate their sizzling position in our relationship with you.

The foreign press, which according to the announcements of the “partners” will put pressure on the Russian Federation more and more, made us really think hard about how wealthy we are today, whether we have chances to stick to our line, to defend our own interests or all our aspirations In this respect, in vain. And in this regard, the seemingly important is the utilitarian question of whether Russia can ensure its own food security, whether it is elementary to feed itself without any insurmountable difficulties. One of the most important components of the consideration of this issue is not only studying, but also qualitative steps to solve the problems of the village. 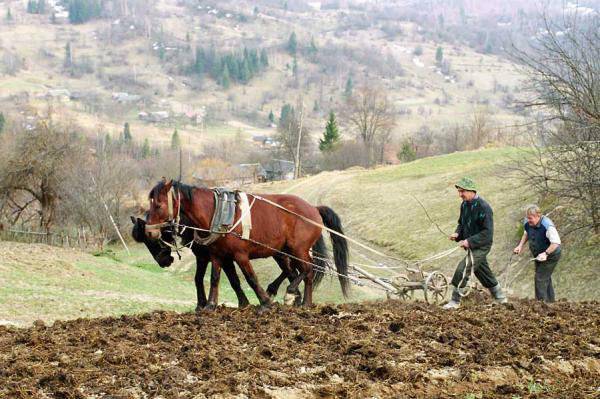 Earlier this week, President Vladimir Putin held an integrated meeting of the State and Presidential Councils, which was devoted specifically to the preparation of a workable strategy for the sustainable development of the Russian countryside. At the meeting, the head of state stressed that the village for Russia is both the production of food products, and the stronghold of identity, traditional way and unique culture. It’s hard not to agree with such a definition, how difficult it is not to agree with another premise that was voiced during the joint meeting of the State Council and the presidential council, namely that the village’s problems were accumulated over the years and it’s time to move on to their full solution so that the village preserved, and got all the opportunities for its development.

The words are certainly correct, beautiful ... But only if you call things by their proper names, the words, unfortunately, remain words for now. If we talk about the economic component, the Russian village annually makes a smaller contribution to the country's GDP for a number of objective and subjective reasons: a relatively high level of unemployment, lack of or poor infrastructure development (roads, power systems, retail outlets, medical facilities, etc.) “Aging” of the village (increase in the average age of rural residents) and, as a result, a decrease in the contribution of the village to the general demography.

The demographic issue continues to be extremely acute in rural areas. There are regions where the village grows annually in terms of population (Kuban, regions of the North Caucasus, Tatarstan), but most of the constituent entities of the Russian Federation indicate a decrease in the percentage ratio between rural and urban residents. According to the latest census, the percentage of the demographic ratio of village / city is approximately 27% to 73%. And these figures continue to change exclusively in the direction of reducing the number of rural residents in the country.

Naturally, the demographic problems in the countryside automatically pull along with themselves problems of a different nature: in particular, this is the problem of undeveloped impressive areas of fertile land. Due to the actual abandonment of fertile land in a number of regions with the light hand of local officials suddenly turn into a property for construction. And most of them grow far from agricultural enterprises, not farms, and not agricultural companies, but cottage villages with an eye to their purchase by wealthy citizens.

On the one hand, this seems to be stimulating the influx of urban capital into the village, but in reality, it is a crushing blow that is inflicted on the country's food independence, on its agriculture. After all, a city dweller acquires a “house in the village” often not at all in order to participate in individual agricultural production, but simply in order to spend time in it, let's say, in the mode of idle rest. There seems to be nothing wrong with this, if we do not take into account the fact that demand creates supply, and therefore an increasing number of agricultural land turns out to be areas for the foundations of new and new mansions, villas and cottages.

What is the root of this particular problem? Roots, by and large, two. The first is the frequent absence of a responsible owner in agricultural lands, the second is corruption. The land, which is empty for years, turns into an object of corruption collusion and its purpose is changed with the stroke of a pen. At the same time, if explanations sound with time, they sound like: the land is still empty ... To solve a problem, you need quality accounting of agricultural land, as well as programs for which these lands can be used for high-grade production, to contribute to food security.

By the way, about the country's food security. Recently, we have become accustomed to saying that the share of food imports in Russia is, if not critical, then close to that. In fact, imports by various categories of food are considerable, but it is also impossible to say that imported products on the Russian market completely crushed domestic production. It is impossible so far ... To understand this, it is necessary to get acquainted with the figures presented in the work of the Russian Academy of National Economy and Public Service, dedicated to the country's safety. How clearly you can trust these figures is a personal matter of each reader, but at least on the basis of these indicators you can make certain conclusions about the directions of further work.

The RANEPA in its work summarizes the calculations, which boil down to the fact that for many groups of agricultural goods Russia was able to reach a significant percentage of self-sufficiency. According to the head of the agro-industrial center of the RANEPA, Natalia Shagaida, the overall level of food security is 89%. If we compare this indicator with the 2004 indicator of the year, then the country's safety increased by about 24%.

Substantial growth in domestic production is accounted for such goods as cereals (indicators by almost 40% higher than the so-called threshold - indicators defined as a minimum for domestic input), vegetable oils (by 52,7% above the threshold), sugar (by 7,8% above the threshold). Russia began to produce pork and chicken meat, chicken eggs in sufficient volumes for domestic consumption. Today, Russia exports grain to dozens of countries around the world, and according to estimates of RANEPA specialists, bakery and confectionery products from Russian grain are consumed over 50 million people outside the country (besides the Russians themselves, of course).

The use of a new program for the development of the village, the volume of grain harvest only in the coming 5-7 years can grow by no less than a quarter (let's not forget the new Russian regions - the Republic of Crimea and Sevastopol, where agriculture makes a considerable contribution to local budgets). They can grow if the state investment program allows for the creation of agricultural jobs in the countryside. Today, investments in the village are so “dotted” that their contribution to the overall development of the countryside and the rural economy is minimal.

And there are those groups of food products, the level of self-sufficiency for which is not as high as we would like. If the share of milk imports is about 20%, then, for example, the situation on the beef market is much more complicated. Here, more than 60% - import. There are large volumes of dependence on imports for fruits and vegetables. The percentage of imports for these products seems to be objective - after all, territories are far from allowing everywhere to start growing fruit and vegetable crops, but sometimes the percentage of imports from foreign countries in this direction actually grows artificially: French, Dutch, Israeli potatoes instead of their own or, for example, Belarusian - some strangeness with the available potentials.

Experts are confident that it will be more difficult to cope with imports due to the fact that Russia is now a member of the WTO. It turns out that simultaneously with the entry into the world trade organization, the state has also found an additional barrier for itself, which is now trying with all its might to overcome. Well, we, as they say, are not looking for easy ways ... Only now we have to look for at least some ways to be really active. Thanks to the sanctions, thanks to the entry into the WTO ...

It seems that only in conditions of total time pressure and critical indicators of external pressure, our intelligent starts to work with maximum productivity ... Now the main thing is to start work in the right direction.