About how Putin Ukraine was scared

April 24 2014
132
Mr Turchinov, currently the acting Ukrainian president, knows a lot about Putin’s inner world. Mr Turchinov rose to the level of a qualified and even an eminent psychologist when he said that Putin was afraid of Ukraine. Like any psychologist, even if an amateur, and. about. President explained his vision of frustrated Putin. It turns out that Ukraine is an exemplary country where people can throw off “thieving rulers”. Putin "is very afraid of Ukraine" - obviously, as an example for the citizens of Russia. That’s why the Russian president is going to “destabilize” Ukraine. 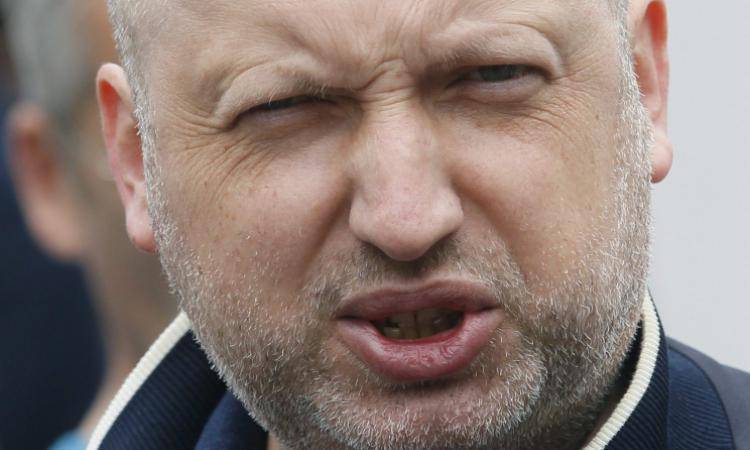 The regime of Vladimir Putin wants to destroy an independent Ukraine, explained Oleksandr Turchynov in an interview with the program “Events of the week” on the TV channel “Ukraine”, reports UNIAN. And about. President said:

“Putin is very afraid of Ukraine, because Ukraine is an example for many post-Soviet states, that people themselves can determine which power they like and which they don’t like. Our people themselves were able to change the power and eliminate, excuse me, the “budget feeders”, the thieving rulers ... And this example is very frightening to Putin. ”

“And to destroy an independent Ukraine is precisely this task that Putin’s regime is pursuing.”

It would be better if Turchinov spoke about the goal that the Obama regime pursues in Ukraine. Oh, probably, not cookies feed the eternal maydanschikov.

The Kremlin is in a difficult position

Meanwhile, Russian Foreign Minister Sergei Lavrov said that the events in the south-east of Ukraine, including calls coming from there to send Russian troops, put the Kremlin in a "difficult position". Words Lavrova quotes "BBC":

“The attacks continue in Slavyansk, Mariupol, other settlements of the south-east of Ukraine, militant attacks in masks, acting absolutely mercilessly ... And you probably see how more and more calls are being made to save Russia from this lawlessness. They put us in a very difficult position. ”

“BBC” reminds that during the “Direct Line” 17 of April, when asked about the possible entry into the eastern regions of Ukraine of a “limited contingent”, the Russian president answered that he hoped to avoid such a scenario.

However, on April 12, the “people's mayor” of Slavyansk, Vyacheslav Ponomarev, announced an appeal to Putin at a press conference: he asked to send Russian peacekeepers to the Donetsk and Lugansk regions. He said the following:

“Vladimir Vladimirovich, we have a small provincial town, and the fascists are trying to conquer us. They kill our brothers. They conduct open fighting against the people. ”

The next day, at a press conference in Moscow, Russian Foreign Minister Sergei Lavrov made it clear that the Kremlin hears appeals from pro-Russian activists in south-eastern Ukraine.

Kiev, in turn, believes that Moscow is involved in the conflict, and one of the proofs of this is the Russian weapon in the eastern regions of Ukraine. On this occasion, S. Lavrov said the following:

“This argument, I think, is simply ridiculous, because there has never been any other weapon. Everybody has Russian weapons there. ”

The BBC reminds that at a meeting in Geneva, the United States, the EU, Russia and Ukraine agreed that illegal armed groups on the territory of Ukraine should disarm and liberate captured buildings and squares. However, pro-Russian activists who proclaimed the "Donetsk People's Republic", said they would not leave the captured administrative buildings in Donetsk and other cities. They will leave the regional administration only when the illegitimate authorities in Kiev leave the parliament and the presidential administration, and at the same time turn down the tents and demonstrators on the Maidan.

Donbass will not feed itself

Meanwhile, the Ukrainian resource "LigaBusinessInform" I figured out how much Ukraine will lose when Russians “cut off” the Donbas. Here is a quote:

“Many Donetsk-Luhansk separatists demand the creation of an independent Donetsk People's Republic. With a neighbor like Russia, they have a chance to realize their dream. LigaBusinessInform analyzed the social and economic importance of Donbass for Ukraine. If the economy of Ukraine almost did not feel the loss of Crimea, since the peninsula gave no more than 3% of GDP, the cutting off of Donbass would be more significant - 16,7% of Ukrainian GDP. However, the industrial power of Donbass is not enough to feed itself. ”

For both areas is characterized by a decline in industrial production. In the Donetsk region, production fell by 6,4%, in Luhansk - by 8,9% (on average in Ukraine, the decline is 4,3%).

The areas of Donetsk and Luhansk regions are respectively 4,3 and 4,4% of the territory of Ukraine.

We add from ourselves, who sees such calculations, may get the impression that the new authorities in Kiev, together with the United States, have decided to say goodbye to the “separatist” regions and give them to Russia. The main thing here is: Russia must attack. And then Kiev and Washington will look white and fluffy, and Moscow - evil and aggressive. And the State Department will exclaim: we warned you!

Yes, that's just not going to attack Moscow. Nevertheless, Lavrov is right: "We are put in a very difficult position." The same Lavrov earlier lucidly explained that the Ukrainian south-east of Russia is not needed. Russia does not intend to include the south-eastern regions of Ukraine in its structure, since this is contrary to the interests of the country, the Russian Foreign Minister said on April 10 on the Russia 11 TV channel, the Russian Foreign Ministry said "Lenta.ru" with reference to the RIA "News».

Russia's path is diplomatic. The Russian Foreign Minister expressed the hope that the Ukrainian government will fulfill its promises to grant greater powers to the regions and that this step will be followed by others, in particular, the constitutional reform.

But Kiev and Washington are just saying that the threat posed by Russia. Hence the "very difficult situation."

One thing is clear here: the White House will not rest until the May elections in Ukraine. And there it will be seen what kind of democracy will sit in Kiev ...

Observed and commented on Oleg Chuvakin
- especially for topwar.ru
Ctrl Enter
Noticed oshЫbku Highlight text and press. Ctrl + Enter
We are
Situational analysis of the death of the MH17 flight (Malaysian Boeing 777), made on the basis of engineering analysis from 15.08.2014Results of the week. "God forbid to see Russian revolt, senseless and merciless!"
Military Reviewin Yandex News
Military Reviewin Google News
132 comments
Information
Dear reader, to leave comments on the publication, you must sign in.