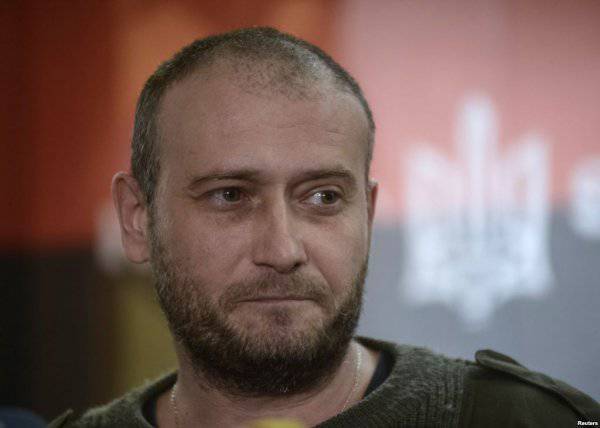 The leader of the Right Sector and the presidential candidate of Ukraine, Dmitry Yarosh, gave an interview to the journalist of the Azerbaijani agency haqqin.az. Along with his vision of Russian-Ukrainian relations and developments in Ukraine, Yarosh also answered the question about the Right Sector attitude towards Armenia’s position on the issue of the right of peoples to self-determination, once again confirmed at the vote on the draft resolution of the UN General Assembly. As a matter of fact, continuing the propaganda policy of Baku, the Azerbaijani journalist started the interview with this question: "How do you comment on the fact that Azerbaijan voted for the resolution of the UN General Assembly, which recognized the territorial integrity of Ukraine and did not recognize the legitimate referendum in Crimea, while Armenia voted against the adoption this resolution, supporting the actions of Russia? "

The first part of the response of the odious Ukrainian politician was logical and predictable: "We are grateful to friendly Azerbaijan for the support and recognition of the territorial integrity of Ukraine" - the candidate for the presidency of Ukraine could not answer otherwise. However, the continuation of D. Yarosh’s response was a blatant threat to the Republic of Armenia and leaves no room for a different understanding of his words. “As for Armenia, the Right Sector will remember its position on the annexation of the Crimea. Ukrainians have a very good memory in general,” said Yarosh.

As you can see, a single representative of the Ukrainian people, Mr. Dmitry Yarosh, has more than serious memory problems. I will not remind him of the outstanding Armenians who have invested their talent and hard work in the development of Ukraine for many centuries before it will be so named. This does not make sense, especially in the light of the demolition of monuments and attacks by militants of the Right Sector on the "objectionable" churches in Ukraine, since the ideology of Yarosh recognizes only the culture of Bandera and Shukhevych. I will not also talk about the Armenian marshals, generals and hundreds of thousands of fighters who liberated Ukraine from the brown plague of fascism. It also does not make sense, since the ideology of Yarosh recognizes only the truth of Bandera and Shukhevych. And here it is worth recalling some events of the recent past.

In his nationalist frenzy, Yarosh forgot about the military pilots Yuriy Belichenko and the Ukrainian citizen Anatoly Chistyakov, who bombed Stepanakert. He forgot about the members of the all-Ukrainian organization UNA UNSO, who participated in the aggression of Azerbaijan against the Artsakh Republic, whose coffin was regularly sent to Ukraine. Forgot about hundreds tanks, thousand wagons aviation bombs, artillery shells and other ammunition transferred by Ukraine to Azerbaijan during the years of aggression of this formation, about Ukrainian women - "white tights" of the Azerbaijani armed forces, who shot at the Armenian defenders of Artsakh. I will not even remind the leader of the "Right Sector" about the Azerbaijani sniper who cold-bloodedly shot the participants of the Maidan in Kiev. I will not, because I am not at all sure that it was not Yarosh and his accomplices who hired killers from Azerbaijan, "friendly" to Ukraine.

but maybe all this was the result of the personal initiative of individual Ukrainians? It turns out that no. 14 March 2008 The 62 session of the UN General Assembly adopted a clearly pronounced anti-Armenian resolution “Situation in the occupied territories of Azerbaijan” prepared in Baku. Ukraine voted for. It was not misled by Azeri propaganda, because countries that are much better informed about the course and development of the conflict, the OSCE Minsk Group Co-Chairmen for the resolution of the Nagorno-Karabakh problem (the United States, France and Russia) voted against. Ukraine voted in support of a false declaration solely on the basis of political and mercantile considerations, but not justice. For all the years of the armed aggression of Azerbaijan and the decades following the negotiations, Ukraine has never (!) Denied Azerbaijan a request to support its criminal position.

Now, when Armenia once again defended its unchanged position - respect for the right of peoples to self-determination, Yarosh suddenly showed “good memory” and he dares to threaten Armenia. Threats of a man behind whom there are several hundreds of cowardly inadequates and criminals like the recently destroyed Alexander Muzychko (Sasha Bilogo) cannot cause anything but laughter. But if this pleases and inspires the Baku propagandists, then I personally have nothing against the yapping of the puppy, the undead. I understand that Azerbaijan has no other joys in life, besides listening to the arias of political eunuchs.

PS For many years of activity, I managed to study well the character of Azerbaijani propagandists and have no doubt that within a few minutes after publication they will forward this article to the leader of the Right Sector. Frankly speaking, this circumstance is good, because Diman Yarosh will finally have the opportunity to find out what a separate representative of the Armenian people thinks of him and his breachful threats.