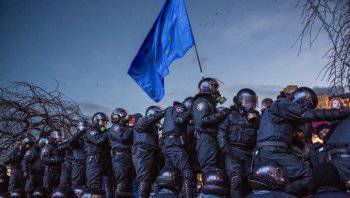 According to the RIA News", the presidential candidate of Ukraine, Oleg Tsarev, said that the new leadership of the country offered the former soldiers special forces "Berkut" for 100-200 thousands of dollars for returning to the Ukrainian Ministry of Internal Affairs.


It is worth recalling that the "Berkut" dissolved in late February. The new authorities of Ukraine have accused the 20 fighters, who opposed the Kiev radicals, of involvement in the shooting on the Maidan. However, the leadership of the special forces rejected these allegations.

Earlier, the media reported that the board of the Ukrainian Ministry of Internal Affairs congratulated the former fighters of the "Golden Eagle" on Easter, calling for cooperation and reconciliation.

But on Tuesday the newspaper "Moscow Komsomol" published an interview with Oleg Tsarev, who said: “They will not return. They were offered a lot of money to come back. 100-200 Thousands of Dollars. " Tsarev noted that "not one of them bought into this money."

According to the head of the headquarters for the reception and placement of employees "Berkut" in Russia Alexei Lobarev, the men do not trust the new Ukrainian government, which can not guarantee their safety.

It is worth recalling that after the start of the persecution of the Berkut fighters in Ukraine, the head of the Russian Interior Ministry Vladimir Kolokoltsev made a statement that those who want to move to the Russian Federation will be helped with housing, work and education of children.

Russian President Vladimir Putin noted that the employees of the "Berkut" "honestly and with dignity performed their duty" and "you can neither humiliate nor kneel the fighters who protect the interests of the state."