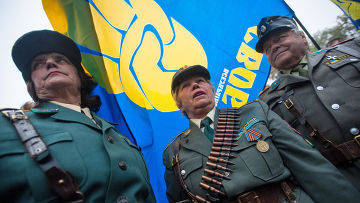 b] American mainstream media feeds the people of the United States with one-sided propaganda about Ukraine, rewriting what is happening there in such a way as to exclude the key role of neo-Nazis, and arguing "collective thinking" that overshadows even the false consensus about weapons mass destruction in Iraq. After the Ukrainian coup on February 22, led by neo-Nazi militants, European and American diplomats began to insist on the urgent formation of a new government, fearing that otherwise these far-right ultra-nationalists would take everything completely under their control. So one of these diplomats told me. [/ B]


Such a statement underlines the existence of a very inconvenient truth about what happened in Ukraine. And it happened there that the neo-Nazis stood at the head of the Kiev coup, who overthrew the elected president Viktor Yanukovych. And now the American government, along with news The media tirelessly tries to hide this reality.

Although field reports in February were full of information about how armed and organized militants associated with the neo-Nazi Freedom Party and Right Sector attacked the police using small arms and Molotov cocktails, this information soon began create a threat to Western propaganda, which claimed that Yanukovych fled allegedly simply because of the peaceful protesters who occupied the Maidan.

Therefore, the most disturbing stories soon disappeared into the hole of memory, having received the label of "Russian propaganda." Now tendentious American media have focused all their attention on militias from the Russian regions of eastern Ukraine who are against Kiev, who refuse to submit to the regime of conspirators and demand regional autonomy.

Now the American press is beating the drums, insisting that these militiamen must disarm in accordance with the Geneva accords reached last week between the United States, the European Union, Russia and the "transitional" Ukrainian government. As for these very inconvenient neo-Nazi militants, they were included in the militarized "National Guard" and sent to the east to conduct an "anti-terrorist operation" against the protesting Russians, whom neo-Nazis treat with contempt.

The new tasks of the neo-Nazi militants were announced last week by the head of the Ukrainian National Security Council, Andrei Paruby, who tweeted: “A reserve unit of the National Guard has been formed. Volunteers of the Maidan self-defense were sent to the front this morning. ”

Parubiy himself is a well-known neo-Nazi who in 1991 was one of the founders of the Social National Party of Ukraine (SNPU). In this game, radical Ukrainian nationalism merged with neo-Nazi symbols. Paruby also formed the patriotic branch of the UPPU “Patriot of Ukraine”. He called for the assignment of the title of "Hero of Ukraine" to the Nazi minion of the Second World War, Stepan Bandera, whose military units killed thousands of Jews and Poles, fighting for the racial purity of Ukraine.

Hurriedly trying to form a government in February immediately after the coup, the new government compromised the intensified neo-Nazis, giving them the leadership of four ministries, and Parubiya putting them in charge of national security. In order to have loyal and well-motivated forces to attack the pro-Russian east, he included in the National Guard many attack aircraft from among his units on the Maidan.

But how do the leading American media describe Paruby? On Sunday, the Washington Post correspondent Kathy Lally (Kathy Lally), who was the most biased among journalists covering the crisis in Ukraine, wrote an article on the first page about the state of the Ukrainian army. It mainly relies on the words of Paruby.

Lally simply called him “the secretary of the National Security and Defense Council of Ukraine”, without telling anything about Parubiy’s extreme right-wing policy and how he illegally gained his post. Then Lally led him to the statement that Russia "intended to bring about the collapse of this government and replace it with another, which would take into account the opinion of Moscow."

But Lally is by no means alone when she represents an exceptionally biased "collective thinking" of the American press corps, writing and speaking about Ukraine. Often, the American reader can get an idea of ​​the key role that neo-Nazis play in Ukraine, just by reading the constant refutations of this very real fact.

New York Times columnist Nicholas Kristof returned to the home of his ancestors in the village of Karapchiv in western Ukraine, to ask some of its residents, and then present their views as the true voice of the people.

“To understand why Ukrainians are willing to take risks and fight with Russia in order to break out of Moscow’s iron grip, I came to this village where my father grew up,” he wrote. “Even in this village, Ukrainians watch Russian television and speak with hatred of propaganda that portrays them as neo-Nazi gangsters who are violently attacking the Russian-speaking population.”

“To listen to them, we all walk with machine guns and beat people,” said history teacher Ilya M. а.с..k.a.

Of course, the words of M.d.s.k.a.lya is an exaggeration. The Russian media do not make such allegations, although they note, for example, that neo-Nazi militants, now called "National Guard fighters," killed three protesters in eastern Ukraine last week, as announced by the government in Kiev.

But in his nostalgia for his father's family estate, Christophe does not stop there. He calls the village of his ancestors a noble place where everyone loves Taylor Swift music and dreams about how they will live in prosperous Europe - if only President Barack Obama sent them weapons to shoot the Russians (or “bear hunting”, as Christoph wittily noted in its previous column).

On Sunday, Christophe wrote: "People who love American culture so much are disappointed because President Obama does not take Ukraine more firmly into his arms."

Christof also blames Russia for the economic misfortunes of Ukraine, although it would be more honest to say that as a result of market “shock therapy” imposed on Ukraine by Western advisers after the collapse of the Soviet Union in 1991, a little more than a dozen “oligarchs” with the right connections were able to plunder the wealth of this country and take it under its total economic and political control. They are the main cause of pervasive Ukrainian corruption and poverty.

However, Christophe seems to be preparing his New York Times readers for supporting the violent suppression of popular resistance in eastern Ukraine, which is the political base of President Yanukovych. Christoph is a famous apologist for the “duty to protect” civilians from government forces, but his sense of responsibility is purely selective, following this person’s geopolitical preferences.

Generally speaking, the hiding of Ukrainian neo-Nazism by the American media has become an obsession. This idea is being carried out throughout the mainstream press and even in the blogosphere with greater persistence and unity, rather than a false consensus on weapons of mass destruction in Iraq in 2002-03, which led to a disastrous Iraqi war.

If you look from a purely publicistic point of view, it would seem that the inclusion of the Nazis in the European government for the first time after World War II is a good journalistic story. However, this is contrary to the American story, according to which the protesters on the Maidan were peaceful idealists, and that the protesters were pushed by the evil Yanukovych, who simply fled, unable to resist their powerful moral pressure.

But from this plot-thematic line falls the fact that February 21 Yanukovych with the mediation of three European countries signed an agreement to reduce their powers, to hold early elections, which would have deprived him of power, as well as becoming a fatal withdrawal of police forces. After that, hundreds of neo-Nazi militants from western Ukraine attacked the rest of the police, seized government buildings, and forced Yanukovich and many members of his government to flee, saving their lives.

As one Western diplomat familiar with the situation told me, it was necessary to urgently put together some kind of provisional government, because otherwise the neo-Nazis would take everything under their complete control. According to him, various parliamentary parties promptly impeached Yanukovych (violating the constitutional procedure) and replaced him with a provisional president and government.

To reassure and appease the neo-Nazis, they were given the leadership of four ministries, and Parubiy was appointed head of national security. In addition, neo-Nazi militants joined the official state security apparatus as a National Guard.

But this information has disappeared from the news that the leading American media treats the American people. All this leads us to a new cold war.