May 9 in Lviv will post black flags and ribbons 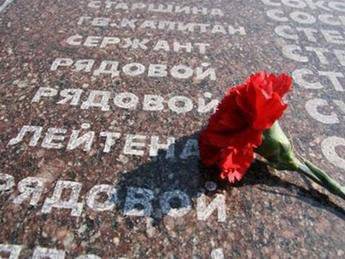 According to the "Russian Spring", Lviv City Council decided to declare May 8-9 days of mourning for those killed during World War II and for the victims of the totalitarian regime. Also these days it is forbidden to use Soviet, communist and Nazi symbols.


A member of the Svoboda Party, Lubomir Melnichuk, noted that Lviv is a European city, so he should take part in honoring those killed during World War II, as is customary in European practice.

By decision of the City Council, 8-9 May on the streets of Lviv appear state flags with black ribbons. In addition, there will be no celebrations and entertainment. On these days, a ban on the use of Soviet, communist and Nazi symbols is introduced in the city.

According to Melnichuk, this initiative should save the city from possible provocations. In addition, with 7 in May, law enforcement officers of the Lviv region will take military monuments under protection.

Ctrl Enter
Noticed oshЫbku Highlight text and press. Ctrl + Enter
We are
Melnichuk said that he has video evidence of the preparation of the attack on Poroshenko"Aydar" technique: hit your own, so that strangers are afraid
Military Reviewin Yandex News
Military Reviewin Google News
131 comment
Information
Dear reader, to leave comments on the publication, you must sign in.