Hello from Hitler, or Patriots paid in cash 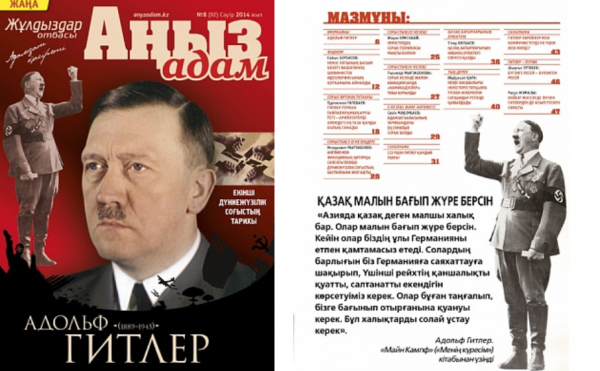 In the Kazakh magazine Zhuldyzdar Otbasy - Anyz Adam (Star House - The Legend Man), a large amount of material was published by the well-known in Kazakhstan arabologist and nationalist Rasul Zhumaly on Hitler. According to Ekho Moskvy radio, the reason why the Russian Foreign Ministry noticed the publication about Hitler was comparing Putin with Hitler. Like it or not (I cannot know what motivated the Ministry of Foreign Affairs), however, I consider the protest of diplomats quite fair. For, as follows from the translation of the article “Hitler is not a Fascist” into Russian, the author clearly justified the actions of Adolf Hitler, and called the sentences of his book Mein Kampf fair and correct.

It must be said that in Kazakhstan itself, the publication caused a mixed reaction. Zharylkap Kalybai, editor of the journal Zhuldyzdar otbasy - Aniz adam, stated that “Hitler’s choice as the hero of the issue was caused by two reasons. We want to show that if at the head of a state a person similar to Adolf Hitler accidentally appears from where, then the people who follow him will fall into the trap. The second reason is “to protect us from the dangerous policy of the ruler of a neighboring country, the Russian empire, reviving the Nazi-chauvinist idea again.”

How even? Rallying Russians around their leader, inspiring a national idea - dangerous for someone? Do they have all the hallmarks of a "Nazi-chauvinist idea"? Congratulations, Kalybai-Murza, you are overwhelmed. For you, the domestic policy of Russia does not concern you at all, and nobody asked your assessment of its national idea. It would be better to continue to revive their traditions, our dear ultrapatriot.

It must be said that the magazine, which has thousands of copies of 25 in Kazakhstan, puts Adolf Hitler’s person on a par with such personalities as commander Alexander the Great, enlightener Ibrai Altynsarin and Napoleon, articles about which have already been published in other issues “Zhuldyzdar otasy - Aniz adam ".

By the way, the article 164 of the Criminal Code of Kazakhstan, incriminated by Zharylkap Kalybay, provides for a very wide range of penalties, from a fine of one minimum calculated figure (less than one hundred dollars) to imprisonment for a period of twelve years. I believe that the newly appeared fighter for the independence of Kazakhstan (which no one actually attempted to do) will receive minimal punishment, because even hooliganism on board the aircraft of the Scat Airlines, where he made a brawl due to the fact that the flight attendant did not talk to him in Kazakh, it cost him three days of administrative arrest.

But, as they say, wait and see. In the meantime, it seems to me a very simple thing: all these "ultra-democratic" messages addressed to Vladimir Putin are no more than the efforts of the benefactors lured by overseas benefactors. And the price for such “revelations” would be worthless if it were not for recurrent relapses and “exposures” that arise. While the Washington White House is searching for non-existent Putin capital, the minions of the star-striped democracy diligently work out what they have received. And how else, then? After all, you will work badly - they won't give you more. Is there any more pleasant music in the world than the rustling of dollar bills?

Ctrl Enter
Noticed oshЫbku Highlight text and press. Ctrl + Enter
We are
A great interview with Sergey Lavrov: about Ukraine, Obama and IranWhat you didn't want to know about England
Military Reviewin Yandex News
Military Reviewin Google News
177 comments
Information
Dear reader, to leave comments on the publication, you must sign in.