In the desecrated sanctuaries

April 22 2014
22
In Syria, both Muslims and Christians traditionally celebrate holidays together. One of these uniting holidays is Easter. Syrians congratulate each other, go to visit, exchange gifts. And, of course, it would not occur to any of normal people to defile the temples of representatives of another faith.


An exception to the general rule is the last scumbag. Unfortunately, it is from these, for the most part, that the so-called “Syrian opposition” consists. Another evidence of this is the fate of the Christian city of Maaloula in the province of Damascus. 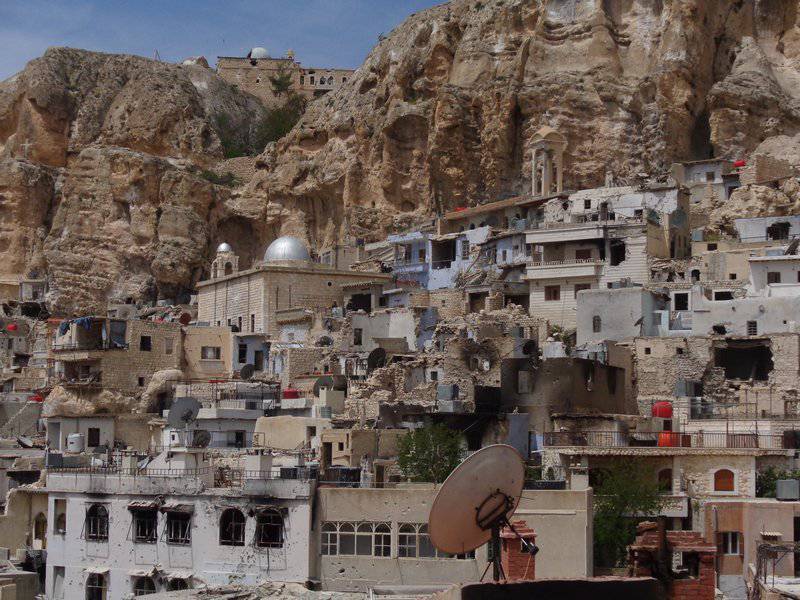 I had to write a lot about this city. It is well known to many thousands of tourists and pilgrims. They came to this holy place from all over the world, mainly to visit the famous monastery of the Holy Equal-to-the-Apostles Thecla.

The ancient legend about Thecla is also well known. The girl was from a noble family, she was distinguished by extraordinary beauty. When she converted to Christianity under the influence of the apostle Paul’s sermons, her parents strongly opposed her daughter’s beliefs. In addition, they wanted to force her into marrying an unloved person. When Thekla refused, they put her in jail. Relatives of the failed bridegroom got a cruel sentence for her - they had to burn her at the stake. However, during the brutal execution of fire was flooded with heavy rain, and the girl was saved.
She fled to Damascus neighborhood. She opened the gift of a healer, and she treated people for free. For this, those who earned money from the medical profession came against her. They sent brigands to eliminate rival. When Thekla ran away from her pursuers, a crack in the rock suddenly opened up before her, and the girl was able to hide in the doorway, after which it closed again. The word "Maalyulya" means "passage."

To this day in this city they spoke Aramaic, known as the language of Christ. In order to save this language from extinction, Syrian President Bashar Al-Assad personally founded the institute to study it.

All the Syrian people respected the sanctity of Maliuli, and only scumbags-bandits had the idea to bring war there. 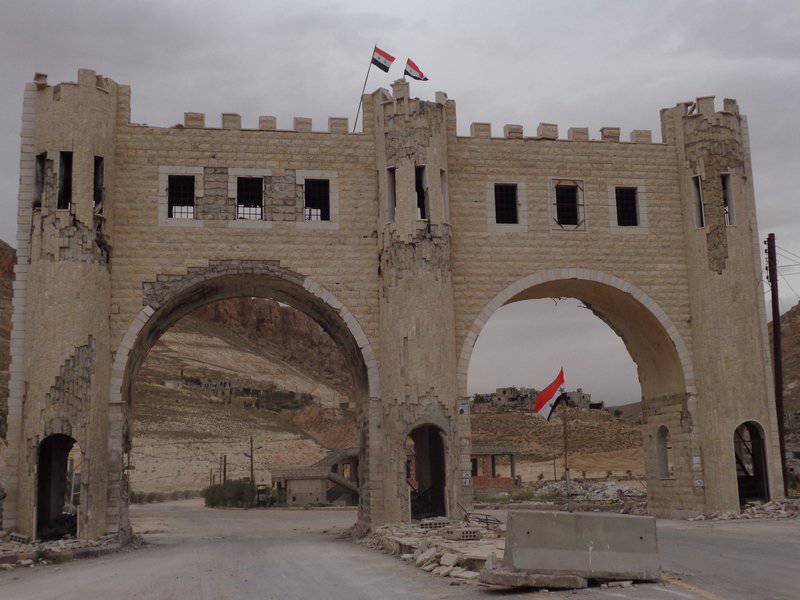 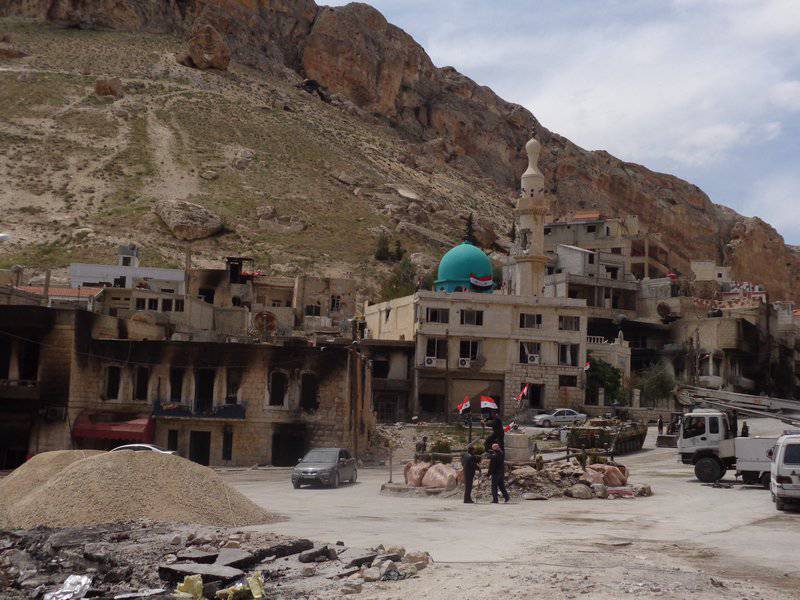 The first terrorist attack on this city was September 8 2013. Militants brutally avenged the Syrians and the state for the defeat under the city of Al-Kseyr, Homs province. At the same time, the first attack on the monastery of St. Thekla took place, but at first it was able to repel it. The Christians left Maalyu, but around 30 people who failed to do this were killed by the "rebels". A few days later, the army managed to beat off the center of the city, but the militants sat down at the top of the Safir hotel, from where the whole of Maalyulya was perfectly visible (and, unfortunately, it was shot through). It was possible to forget about safe life, and soon almost all residents left their homes. 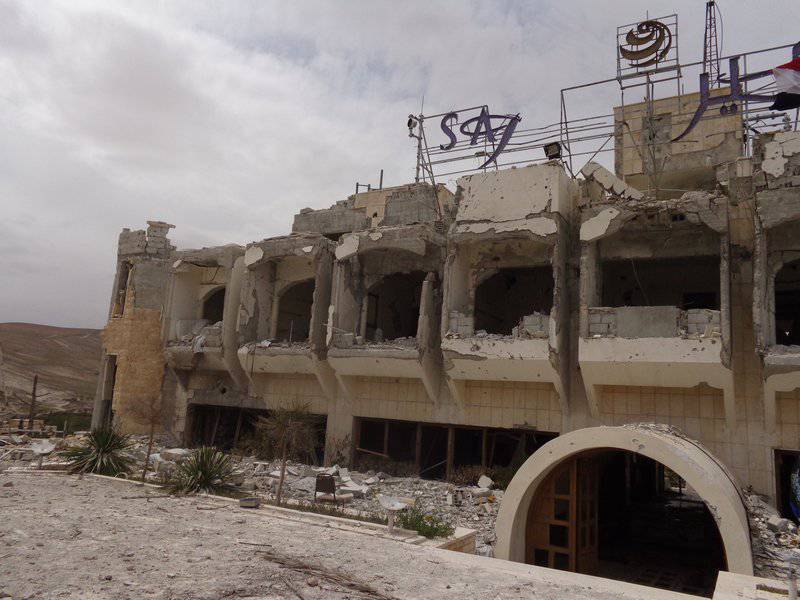 The second wave of the terrorist attack began on November 30 2013 of the year - from the very hotel "Safir". And on December 2 a barbaric attack was made on the monastery of St. Thecla. When it operated a shelter for orphans, which they barely managed to take out. But Mother Superior Pelagia Sayyaf, 12 nuns and novices 3, who refused to leave the monastery, were taken hostage by the gangsters. They wanted to be used as a “human shield”, as well as a subject for blackmailing the Syrian authorities, so that the army would not conduct a counter-terrorist operation in the key area of ​​Kalamoun between Damascus and the Lebanese border. However, after 3 of the month, the sisters were able to be exchanged for female militants, of whom they chose the least dangerous criminals.

And now Maalyulya is released. But this is no longer the city that attracted numerous guests. This is a deserted ghost town, many of which have suffered severe damage. 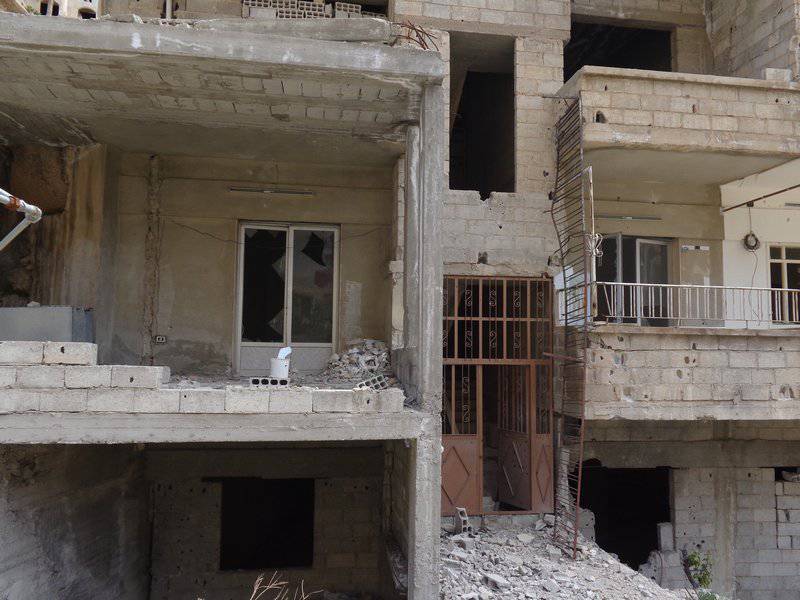 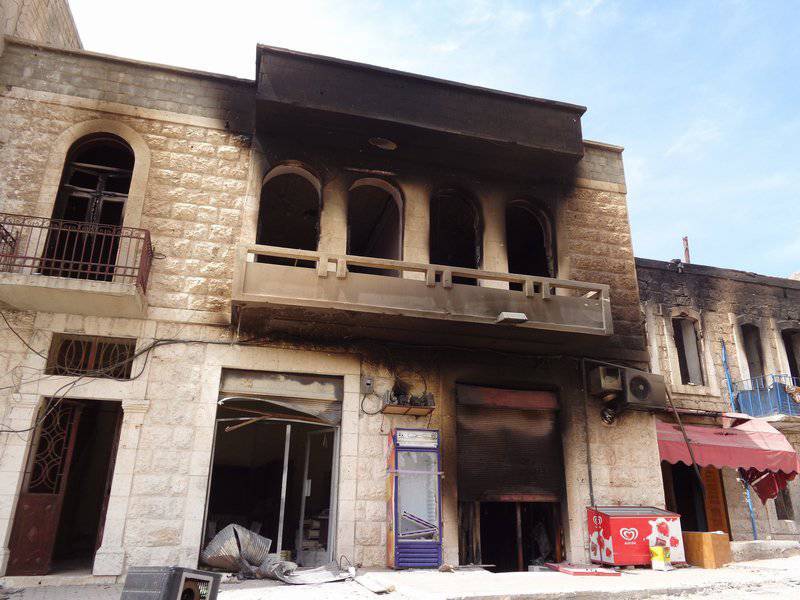 The life of thousands of families is ruined, many people's hearths have turned into lifeless ashes. 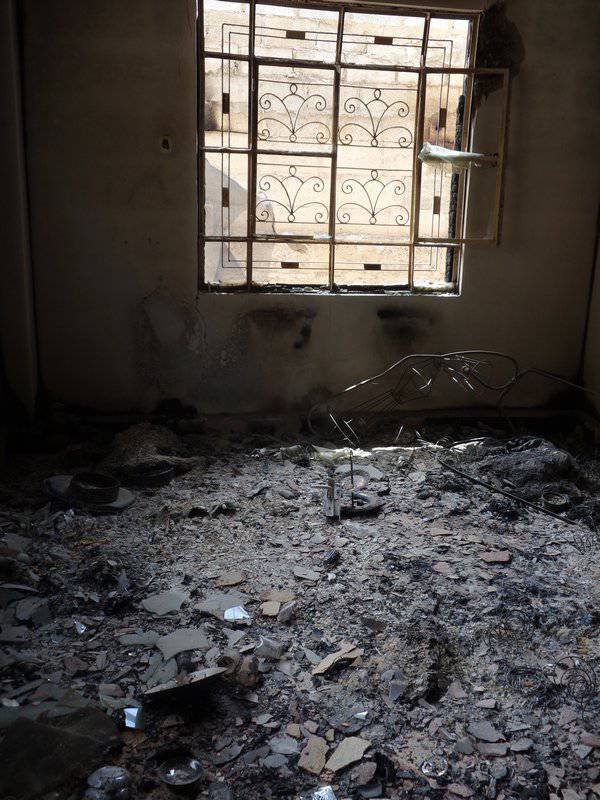 And here is the monastery. Fortunately, the building, although it was damaged, is still possible to restore in its original form, but inside - everything is crushed. However, life goes on. The wind blows a new Syrian flag - the military decorate the monastery and other buildings in the city with banners, preparing for the arrival of the governor, and then the president of the country. 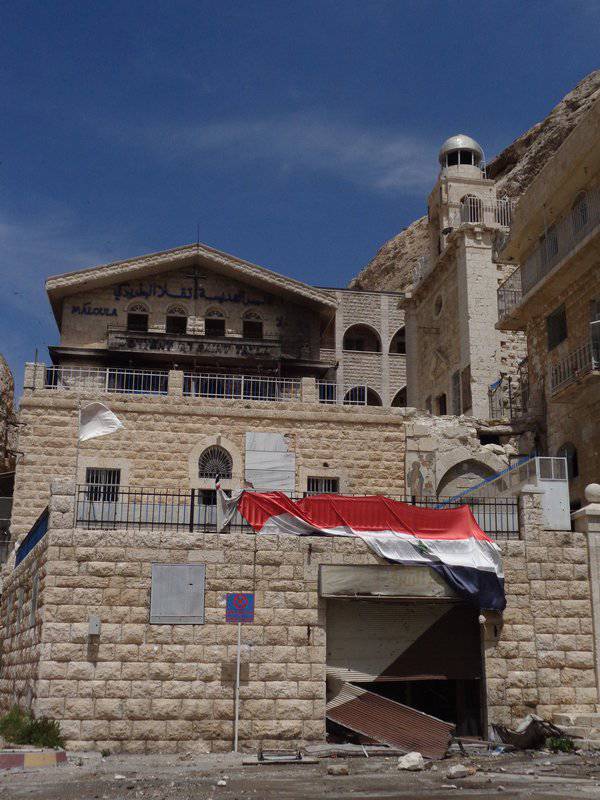 The most valuable icons were taken by militants for sale, but many of the remaining ones are in a pitiful state. Including, there are those that were donated by Russia. Mainly the faces are damaged - it is clear that the icons did not suffer by accident - they were defiled deliberately. 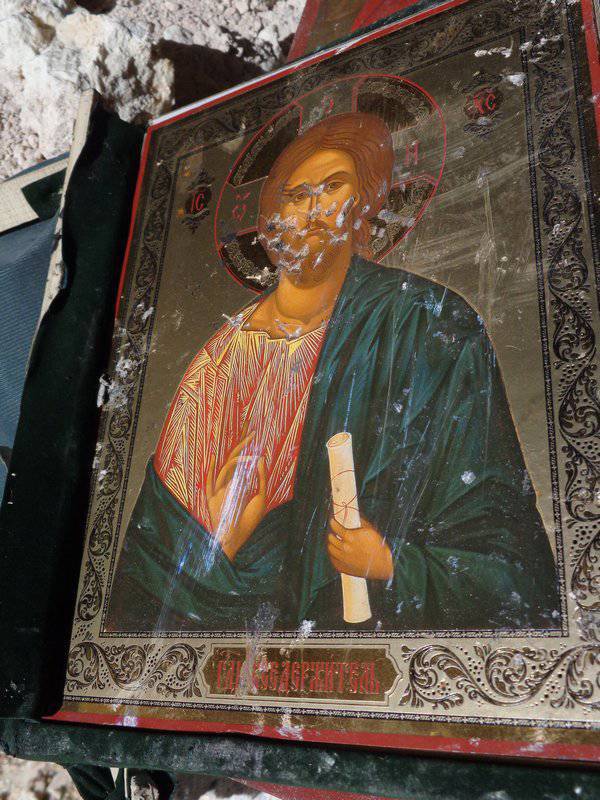 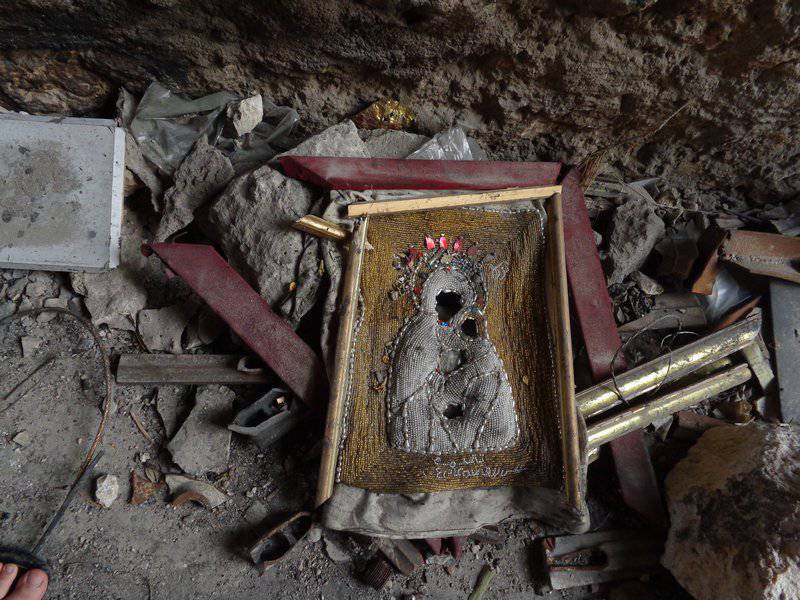 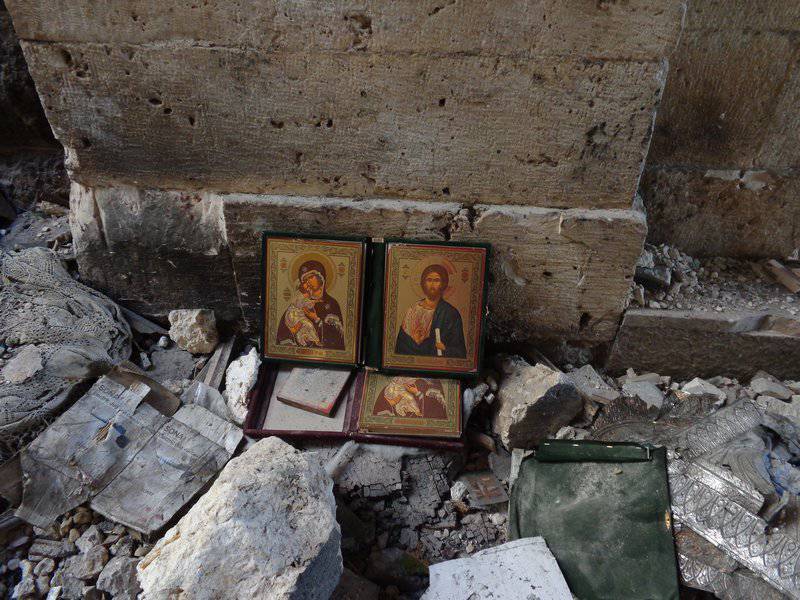 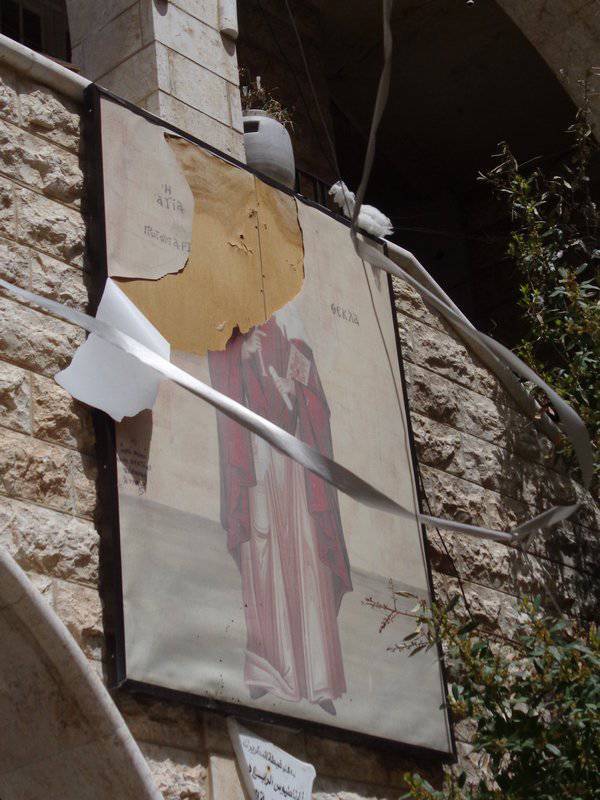 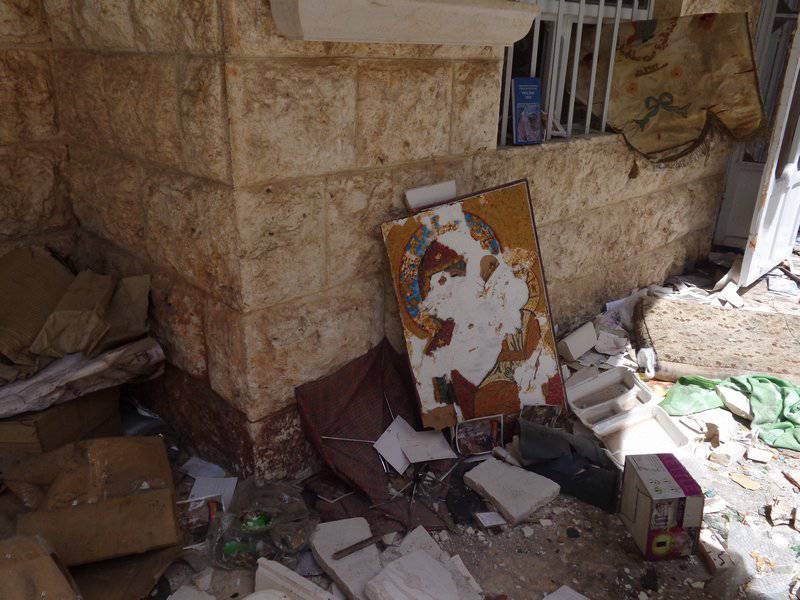 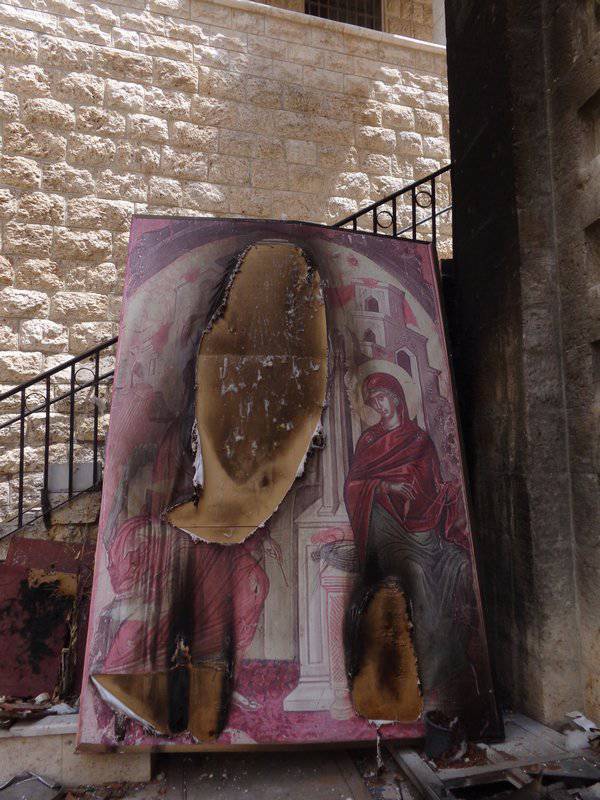 In the premises of the monastery - on the place of burial of St. Thecla, in the monastic cells, in the rooms where the pupils lived - chaos and defeat reigns everywhere. Some of the bandits "showed their strength" by breaking the cross. 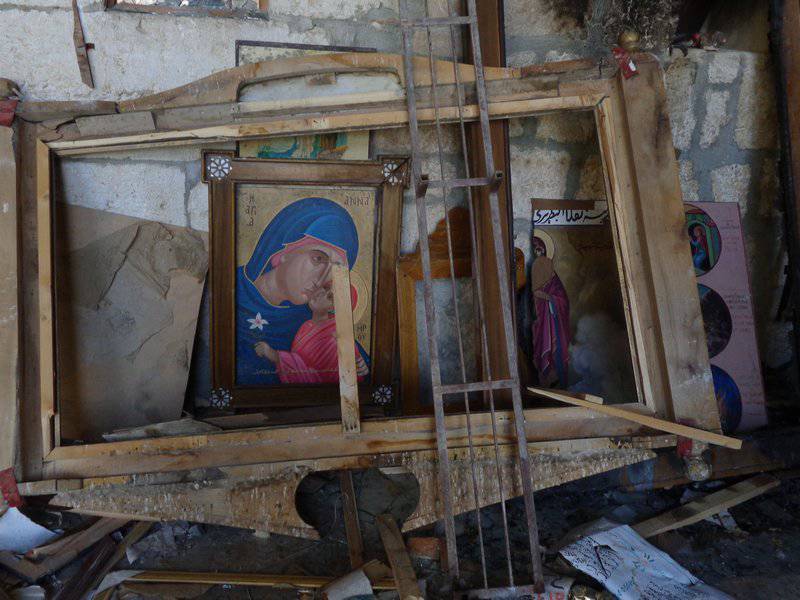 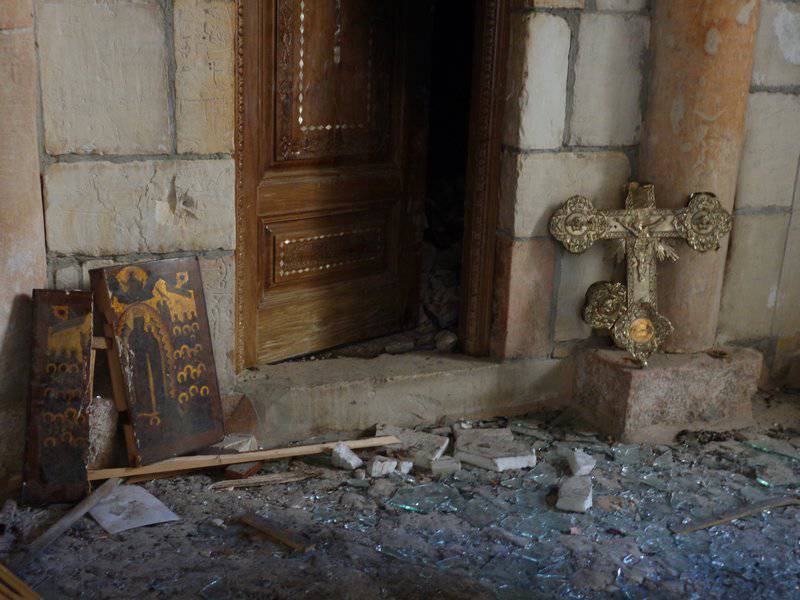 After seeing the monastery, we rise above. There is a church of Saints Sergius and Bacchus. This shrine also suffered damage - the altar was crushed, a huge hole was pierced in the dome, all valuables were stolen. 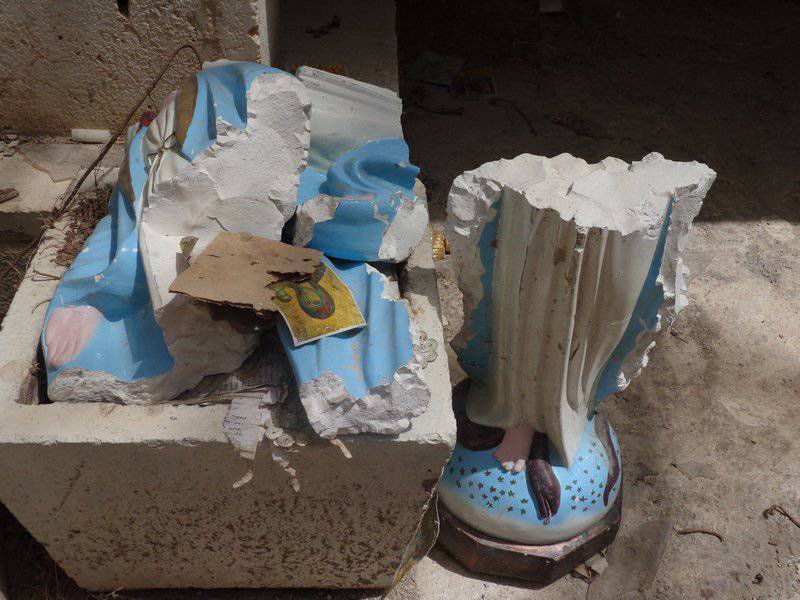 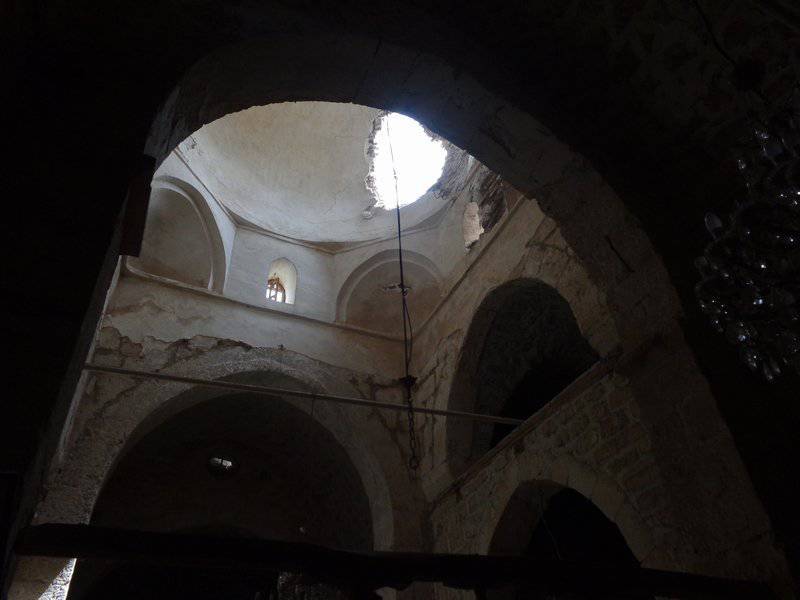 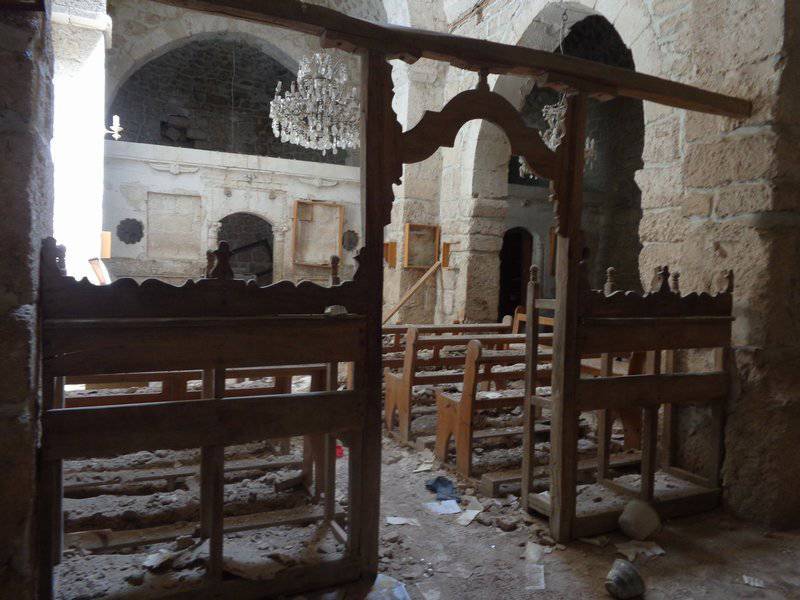 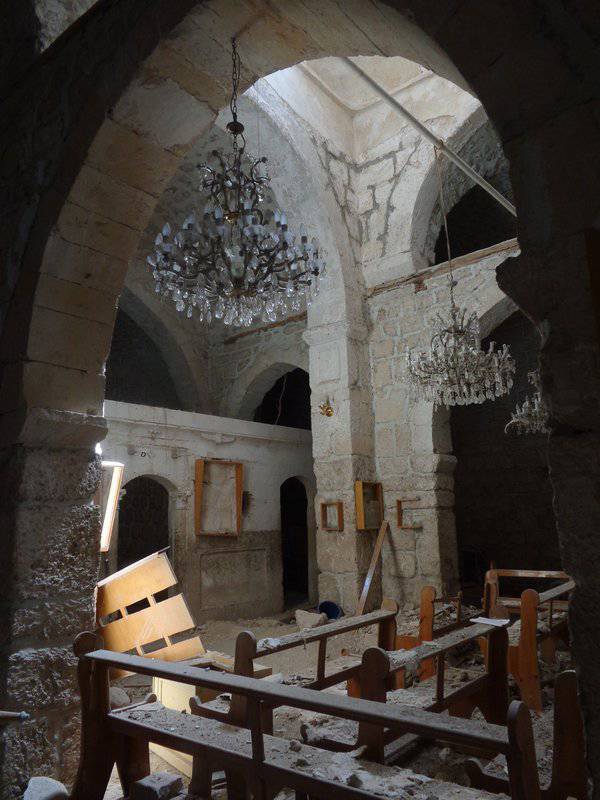 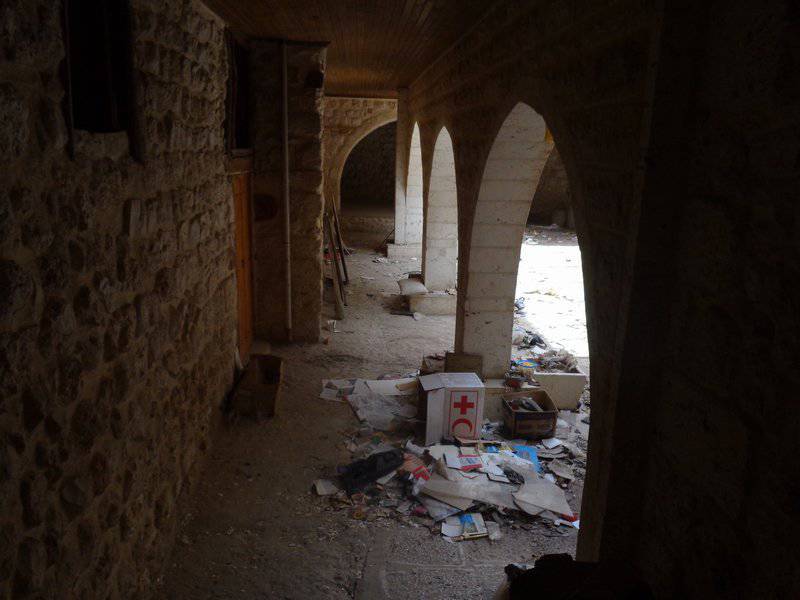 The Safir Hotel, where the pilgrims stayed, became the scene of particularly fierce fighting, since it was his who chose the terrorists as their main base. After all, let me remind you that it is from this position that Maalulya is clearly visible. It is unlikely that it is subject to recovery. 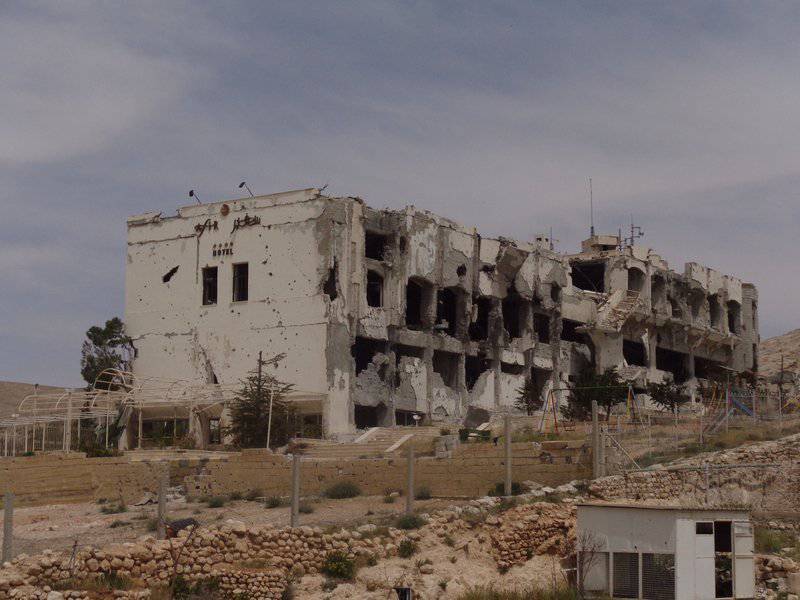 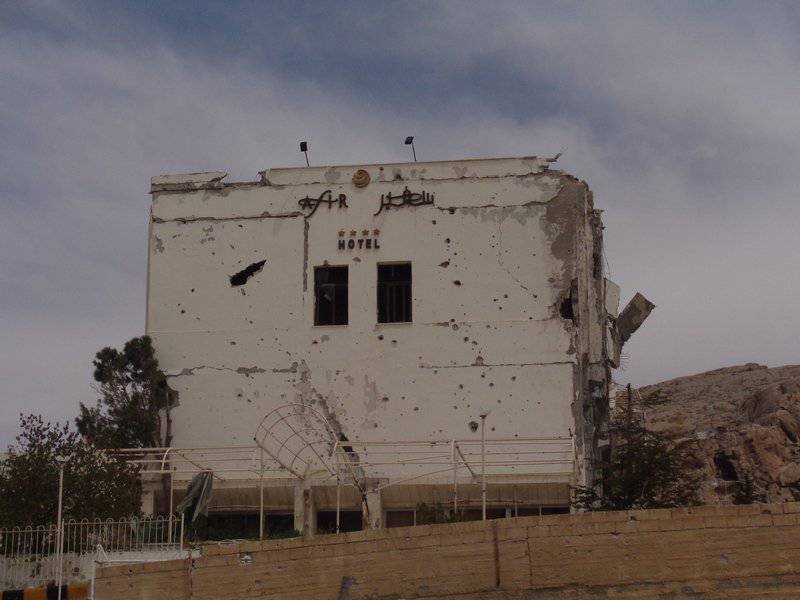 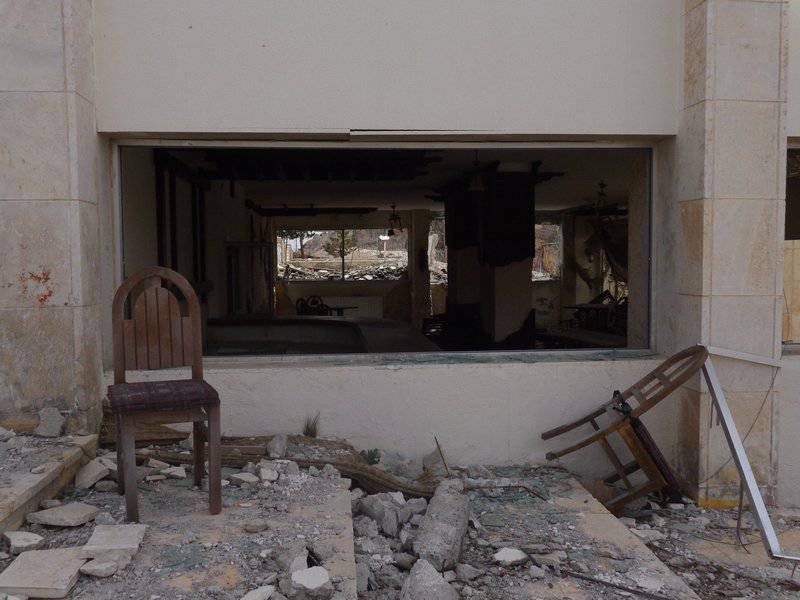 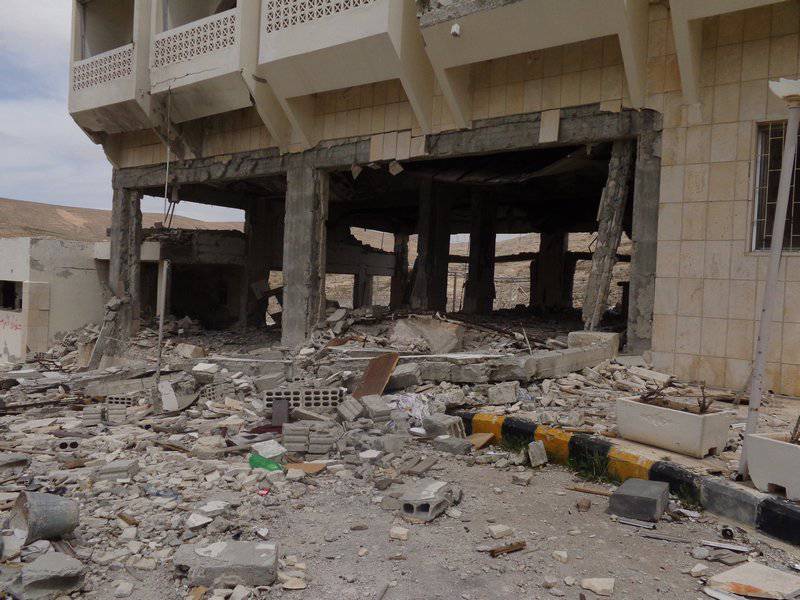 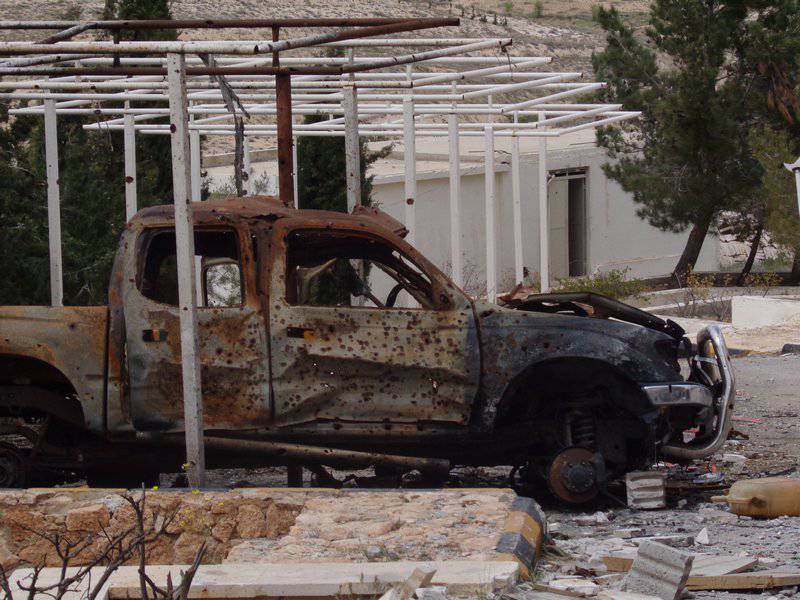 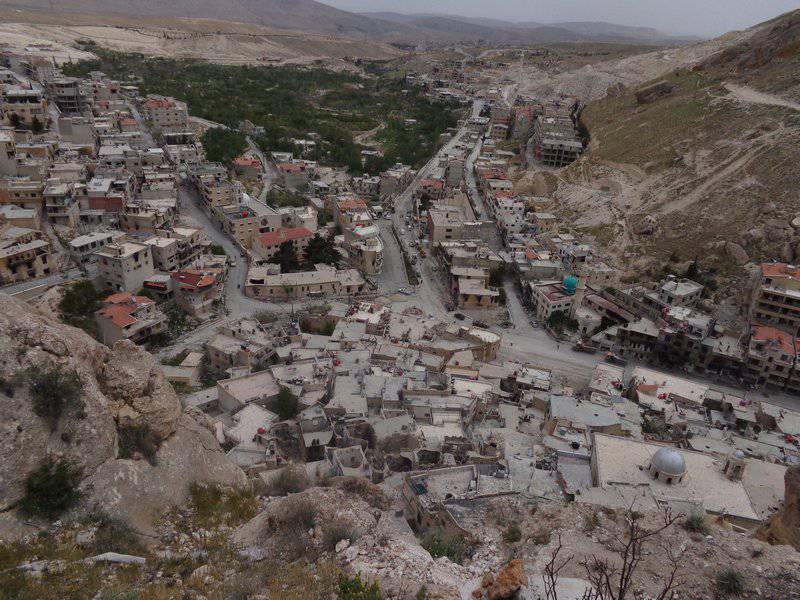 ... On April 19, in addition to our journalistic delegation, Maaluly was visited by the governor of the province of Damascus, Hussein Makhlyuf. He got acquainted with the situation in the city, assessed the extent of the destruction.

And on April 12, 20, on Easter day, Syrian President Bashar Al-Assad visited this holy place. He congratulated the Syrian people on the Resurrection of Christ and stressed: “No terrorism can erase the Syrian history and civilization, Maalyulya and other historical and cultural monuments are not subject to barbarism and darkness ". The head of state met with residents of neighboring villages who arrived in Maalulya to talk with him.
It was very pleasant to meet the nuns from the monastery who spent the month of 3 captive to the bandits, in good health. They took part in the Easter service at the Church of the Holy Cross in Damascus. 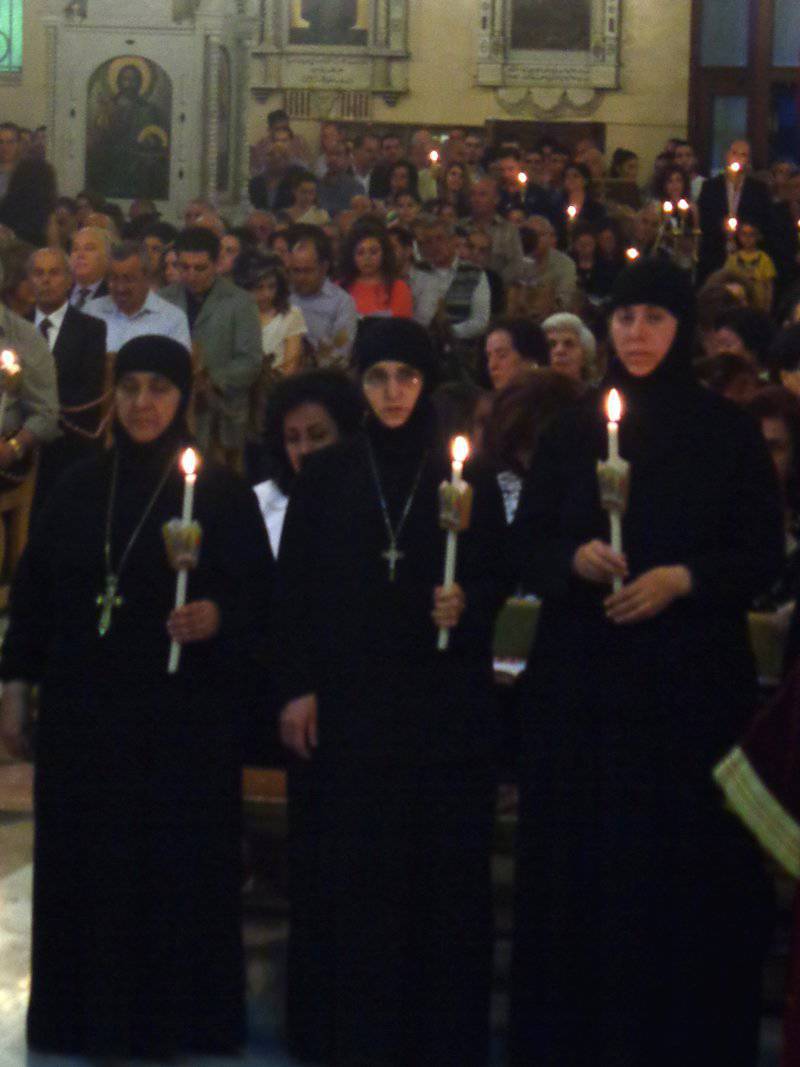 The Syrians prayed for the return of the world to their long-suffering country, for the repose of the souls of the fallen, and for this holy land to flourish more beautifully than before.

Ctrl Enter
Noticed oshЫbku Highlight text and press. Ctrl + Enter
We are
Genocide of Christians in the Middle East. Millions of people have become a bargaining chip for American geopoliticsThe hopes and anxieties of the Syrian capital
Military Reviewin Yandex News
Military Reviewin Google News
22 comments
Information
Dear reader, to leave comments on the publication, you must sign in.