Combat awards of the Russian Federation. Medal of Nesterov

April 22 2014
9
March 2, 1994 on the basis of a presidential decree in Russia, a new military award was established - the Nesterov medal. The Nesterov Medal is a state award of the Russian Federation, which was named after Pyotr Nikolayevich Nesterov, a Russian military pilot, participant in the First World War, one of the founders of aerobatics (one of the most famous aerobatics - Nesterov’s loop, or dead loop, is named so it is in his honor). The brave pilot died in 1914 in an air battle, the first time in the practice of using combat aviation applying an air ram.


The medal is intended to award both military pilots and civilians, as well as all persons related to the aviation and aviation industry. The medal logically complements a number of awards intended for awarding servicemen of different types of armed forces: the Suvorov medal (RF Ground Forces), the Ushakov medal (RF Navy) and the Nesterov medal (RF Air Force). Moreover, this award does not have historical predecessors.

Many experts have questions about the choice of Peter Nesterov’s candidacy to create a personal medal, especially in comparison with Suvorov and Ushakov. In this series, the figure of Nesterov, which has a completely different scale, looks somewhat strange, which in no way detracts from the merits of Pyotr Nikolayevich Nesterov, who was really a famous Russian pilot. Being the founder of aerobatics, he deliberately took risks in the sky.

On 27 of August 1913 in the city of Kiev at Syretsky airdrome for the first time in aviation history he performed a dead loop, which will later be called in his honor. The captain Nesterov died at the very beginning of the First World War, on 8 of September 1914 of the year, having managed to make 28 sorties. The pilot’s last feat was the first ram in the history of aviation. Pyotr Nesterov rammed an Austrian plane engaged in reconnaissance of the movement of Russian troops. 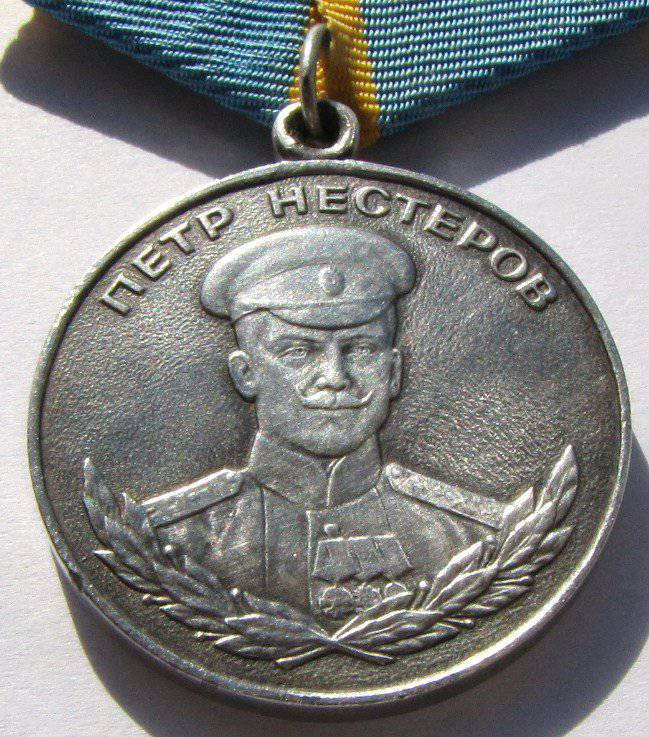 According to the statute of the award, the Nesterov medal can be awarded to military personnel of the Air Force, aviation of other types and families of the Armed Forces of the Russian Federation, as well as the internal troops of the Ministry of Internal Affairs of Russia, the Federal Security Service of Russia, the flight personnel of Russian civil aviation and the aviation industry the interests of the Russian Federation, in the course of combat duty and combat service, with participation in exercises and maneuvers, as well as for excellent performance in air skills and in combat training, for special merits in the development, ex operation and maintenance of aircraft, high professional skills of navigation.

The Nesterov Medal is made of pure silver, it is made in the shape of a circle with a diameter of 32 mm with a convex side on both sides. On the obverse side of the medal there is a bold relief image of Peter Nesterov in military uniform - his cap and jacket. In the upper part of the medal there is a relief inscription “PETER NESTEROV” (all capital letters), in the lower part there is a relief laurel wreath. On the reverse side of the award, in the upper part, there is a relief image of the emblem of the military pilots of Russia - a double-headed eagle with a sword, a propeller and a flaming grenade; in the lower part there is an award number.

With the help of a ring and an ear, the medal is connected to a standard pentagonal pad, which is covered with a blue silk ribbon with two yellow stripes along the edges. The width of the tape is 24 mm, the width of the yellow stripes is 3 mm. The Nesterov Medal is worn on the left side of the chest and, in the presence of other state awards of the Russian Federation, is located immediately after the Ushakov Medal. 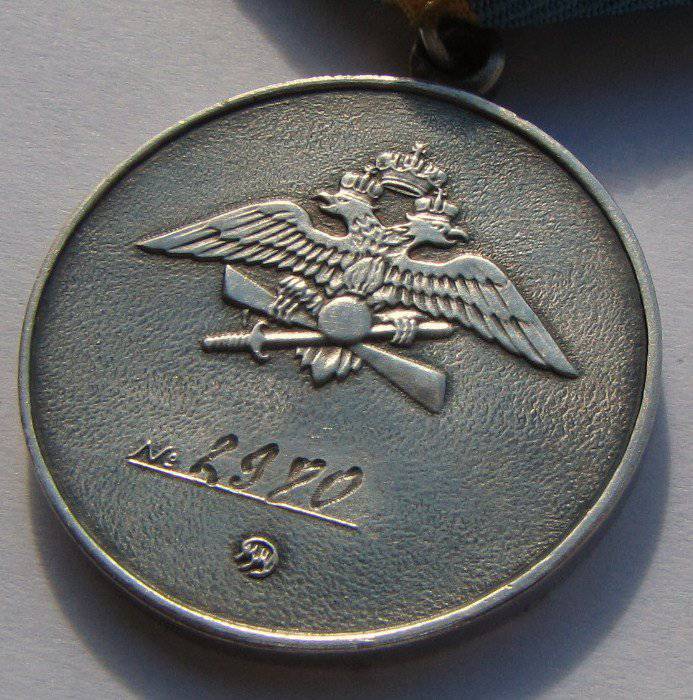 In total, since 1994, the Nesterov medal has been awarded more than 1 thousands of awards. The medal does not provide for re-and posthumous award. Among those awarded with the Nesterov medal there is one woman - this is the second pilot of the aircraft of the airline "Krasnoyarsk Airlines" Nina Lityushkina, who received her award in the 2007 year. At the same time, only information on the number of awards for civil merits is available in the public domain. Information about the citizens who were awarded the Nesterov Medal for personal courage and courage, which they showed in defending the Fatherland and the state interests of the Russian Federation, while performing combat service and combat duty, with participation in exercises and maneuvers, for excellent performance in combat training and air training, no.

The first known medal award took place on 29 May 1995. The medal was awarded to Andrei Chernyak, the co-pilot of the airline "Saratov Airlines". The last known award ceremony was 14 January 2014. The medal was awarded to Vasily Esev, an instructor pilot of the flight team of the Abakan-Avia airline, for merits in the development of aircraft, high professional skills and many years of diligent work.

Ctrl Enter
Noticed oshЫbku Highlight text and press. Ctrl + Enter
We are
Congratulations on the 285 anniversary of the birth of the Great Russian commander Alexander Vasilyevich Suvorov!Air ram is not only a weapon of Soviet heroes
Military Reviewin Yandex News
Military Reviewin Google News
9 comments
Information
Dear reader, to leave comments on the publication, you must sign in.