Tank guns of the USSR

15 2013 June
11
First soviet tank the guns were 37 mm, both standing on the first KS tank, and on the most common T-18. Alas, the 37-mm gun, according to the experience gained during the Soviet-Chinese conflict of 1929, was not effective enough to defeat the enemy’s manpower, although its armor-piercing was considered quite sufficient. The high-explosive shell of the 45-mm gun was almost 50% heavier than the 37-mm fragmentation shell. It was in connection with this that the 45-mm gun was adopted as the main one for the new Soviet tanks. Over the years, it remained the main Soviet tank weapons and was installed on the T-26, BT-5 and BT-7. In the 30s, the 45-mm gun became the basis of the anti-tank artillery, which was in service with the Red Army. At the same time, it must be recognized that the German 37-mm anti-tank gun was taken as the basis of the famous and reliable "forty-five". The barrel was replaced in the gun, no other design changes were made, and at the same time, the gun became the main means of destroying enemy armored vehicles, which were in service with the Soviet army. 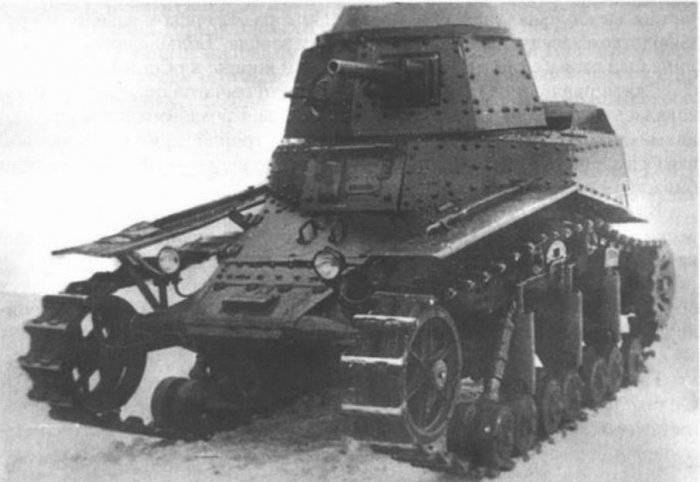 Initially, the 45-mm gun was not considered as the main one for mounting on tanks. On the T-26 and BT-2 tanks, an 37-mm gun was installed. Only in 1932, the new 45-mm tank gun, which was installed on the BT-5, BT-7, T-26, and for many years became the main tool of the Soviet tanks. 45-mm gun was quite effective at the time and was suitable for light and medium tanks. The "forty-five" became the most massive tank weapon in the world because of the fact that the Soviet army was armed with a huge amount of armored vehicles. In 1941, the number of tanks in the USSR totaled more than 20 thousand units, including machine gun lightly armored T-37 and T-38 tankettes. But by the end of the thirties, all this technique was technically outdated. Stalin could easily have arranged the war in 1937-1939, but later it would have to be retooled to a newer and more powerful one. weapon. Rearmament was begun in the late thirties, but by the beginning of the Second World War was not finished. Not immediately decided on the parameters of the new tanks. So, in the short Finnish war, along with heavy KV-1, other heavy tanks, QMS and T-100, with a unique two-tower structure were tested. One tower with an installed 76.2-mm gun was intended for the destruction of infantry and the destruction of fortifications, the second with an 45-mm gun was intended for the destruction of enemy light and medium tanks. 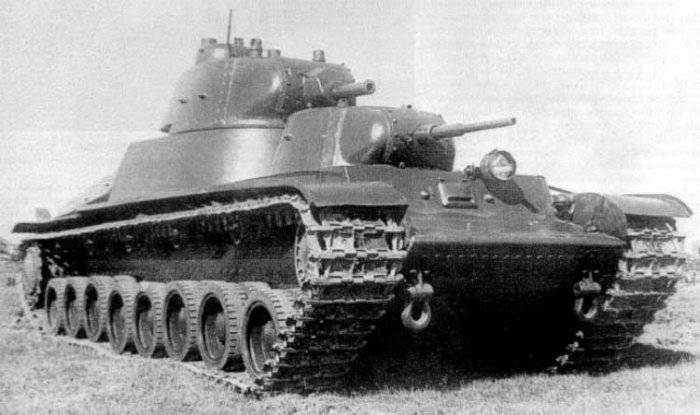 The main tanks, which entered service with the Soviet army as a result of rearmament, were heavy KV (Klim Voroshilov), which were not entirely successful due to weak transmission, and medium T-34 tanks (designer Koshkin), which became the main tanks of the period of the Second World War . Despite the fact that the re-equipment and the transition to the new tanks began in the 1940 year, only a small part of the Soviet troops managed to move to the beginning of the Second World War. The main weapon installed on these tanks was the 76,2-mm cannon L-11, later the F-32 cannon, which had sufficient armor-piercing and fragmentation. It is especially necessary to highlight the KV-2 tank, on which the X-NUMX-mm howitzer M-152 was installed — a weapon of unprecedented power for tanks. In fact, it was the ACS, but the difference from later developments was that the KV-10 had a rotating turret. 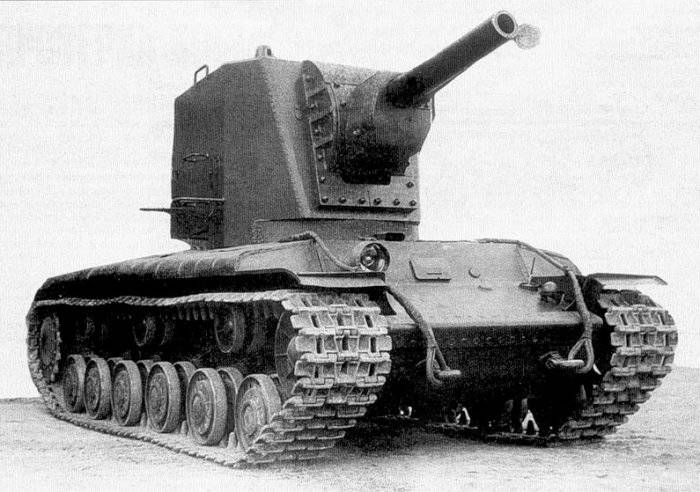 Before the beginning of the war in the USSR, a light tank was tested with an established recoilless 203,4-mm tool of Kurchevsky. Like other recoilless guns, this gun was not very good, however, like other developments in the past, a successful designer. The lightweight T-60 tank was armed with 20-mm guns, and on some T-34 tanks they installed 57-mm ZIS-2 cannon. The last weapon had the same charge as the usual 76,2-mm, but the armor-piercing of its projectile was much more powerful. However, the fragmentation projectile of this gun was only ten percent higher than the “forty-five” fragmentation projectile and significantly inferior in anti-personnel action to the “three-inch” projectiles. With the beginning of the Second World War, it suddenly became clear that there were no powerful tanks in service with the German army, which rather expensive ZIS-2 was intended to destroy. 76,2 tools mm. became the main installation for tanks T-34 and KV. The armor-piercing and fragmentation of the projectile proved to be quite sufficient for effective fire and destruction of enemy personnel and armored vehicles. 76,2 tools mm. brought success at the beginning of the Second World War, but with the advent of the German army "Panther" and "Tigers" they were outdated, as the frontal armor of the enemy tanks was not penetrated for them. Exit found in the installation of existing tanks new powerful 85-mm. guns. At first it was the D-5T, which was soon replaced by the more successful ZIS-C-53. Tank T-34-85 with this instrument began to produce in 1944 year. They became the main Soviet tanks of the final stage of the Second World War and were used for a long time after its completion, repeatedly modernizing. 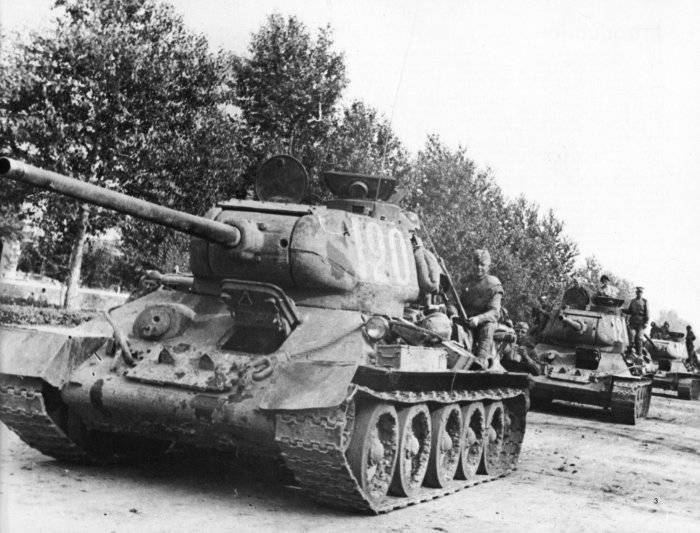 For heavy and powerful IS-2 tanks, the 122-mm D-25T proved to be the most appropriate weapon. This decision to complete the tank was far from clear. Shortly before the start of the war, 95-mm was tested in the USSR. guns, which fully met all the requirements for tank guns. The only problem that prevented the start of mass production of these guns was the lack of ready lines for the production of ammunition, and in view of the approaching war, the production of guns was decided to abandon. For complex and expensive 107 mm guns in production, a large amount of ammunition remained from the time of Russia's participation in the First World War, but still the USSR went for the mass production of the 122 mm howitzer. It was the 122-mm gun that was chosen as the main turret gun for the EC-2 tanks. Due to the use of powerful guns, the ammunition set had to be significantly reduced, and the fact that the gun had separate loading led to a significant increase in recharge time. There were attempts to use unitary projectiles for firing 122-mm guns, but, alas, it did not bring a positive result. 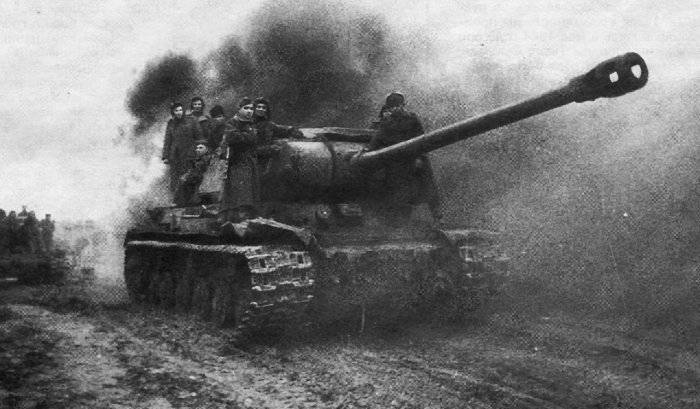 Soon after the Second World War, the T-54 and its modification T-55 became the main tank of the USSR, and later the entire block of the Warsaw Pact countries. On these tanks was installed rifled 100-mm gun, which at that time was considered quite sufficient, but at the turn of 50-60 it was outdated. This was due to the fact that the NATO countries were preparing to adopt the new Leopard, M-60, AMX-30 tanks. In the USSR, work was already underway to create and manufacture a promising T-64 tank, but the simplest way out was to re-equip the old T-55 with a new, more powerful tool. Suitable tool found quite quickly. At the suggestion of FF Petrov, a well-known designer of artillery systems, under whose strict guidance almost all post-war tank guns were created in our country, the 100-mm tank gun was turned into an 115-mm smooth-bore gun by means of intrastrip rifles. A new weapon was installed on the next modification of the T-54 tank, which received the symbol T-62. Smoothbore gun turned out very powerful. The initial speed of a shot of a subscale armor-piercing projectile was 1,6 kilometers per second. It was the speed of the V-2 rocket. For such a high speed had to pay the durability of guns. The service life of the gun was no more than 400 shots, despite the fact that the usual 100 mm gun retained its fighting qualities even after 10 thousands of shots. 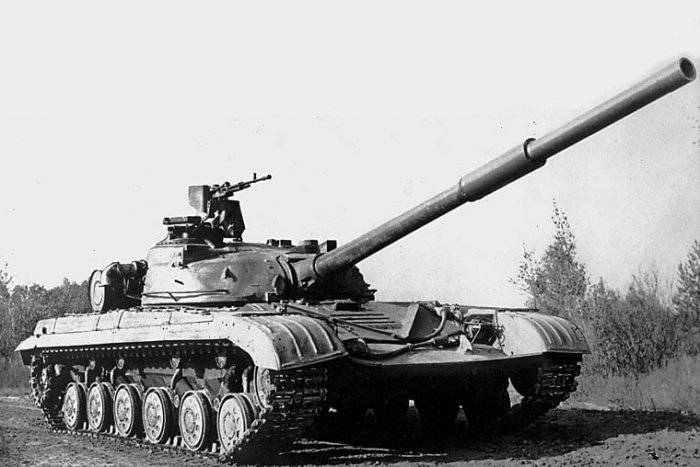 History development of tank guns is inextricably linked with the history of the development of artillery and the production of tanks, but there are some milestones in it, which remain covered with a veil of secrets and secrets.
Ctrl Enter
Noticed a mistake Highlight text and press. Ctrl + Enter
We are
The famous "Three-inch"Tank "Panther"
11 comments
Information
Dear reader, to leave comments on the publication, you must to register.