April 22 2014
0
In 1942, Canada was preparing for serial construction of serial tanks Grizzly, which is a modified copy of the American armored vehicles M4 Sherman. At this stage of the project, a proposal came up regarding the protection of tank units. It was proposed to create a self-propelled anti-aircraft mount (ZSU), which could accompany troops on the march and on the battlefield, as well as carry out air defense units. The chassis of the new Grizzly tank was considered as the basis for such a ZSU. 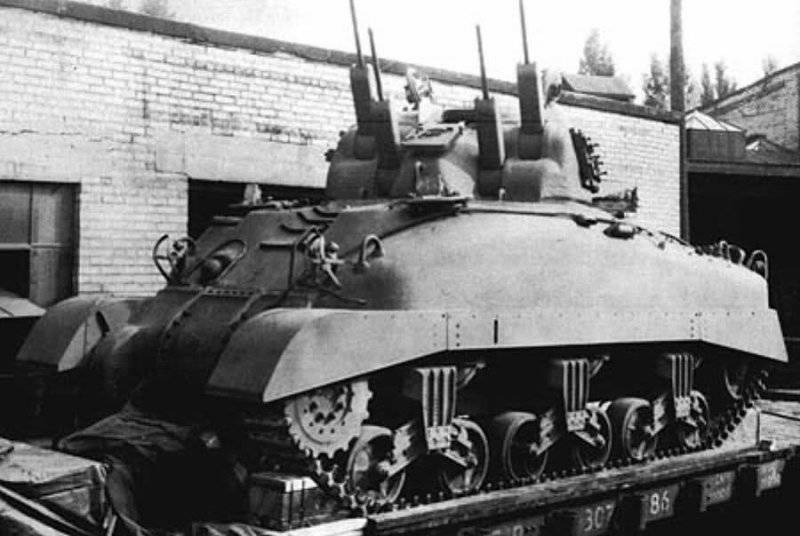 The end of 1942 of the year was spent on exploring the prospects of anti-aircraft systems and industry capabilities. As a result, a general list of requirements for the new ZSU appeared. The base for the car was proposed to make a tank Grizzly. It was proposed to install a specially designed turret with weapons on the tracked chassis. The main armament of self-propelled self-propelled guns were to be four automatic caliber 20 mm. According to specialists, such weapon allowed to effectively hit enemy aircraft of various classes and types.

Technical requirements were transferred to the organization Canadian Army Technical Development Board (CATDB), which was engaged in the development of self-propelled anti-aircraft installation. The project received the designation Project 47. In addition, according to the Canadian tradition, the promising combat vehicle received an alternative name from the animal world - Skink ("Skink", a family of lizards). The main task of CATDB was to design a tower with weapons suitable for installation on existing tanks. The project was prepared in March 1943.

The military got acquainted with the draft of the tower and gave the go-ahead to build the layout. Waterloo Manufacturing Co. was involved in this work. The wooden mockup of the tower was demonstrated to the military in mid-September 1943. The layout made a good impression on the customer and a new order followed. Now it was required to build two towers for testing.

A characteristic feature of the project Skink was the constant change of its various elements. So, initially the tower of the prospective ZSU was supposed to carry four guns of the Hispano-Suiza company, assembled under license in Canada. However, by the time the two pilot towers began to be built, the military decided to use another weapon. The four 20-mm guns of the British company Polsten became the “main caliber” of the self-propelled guns. They were a modified version of the guns of the company Oerlikon and by some characteristics surpassed the originally proposed weapon.

Even more interesting was история the tower itself. In January, 1944, the assembly of the first experimental tower, consisting of several armor plates, ended. Sheets were joined by welding. Despite the seeming simplicity of the design, the welded tower was too complicated to manufacture. The assembly of this unit was associated with some technological problems. In this regard, it was proposed to develop a new tower, which could be completely made by casting. The creation of such a tower continued until April 44. 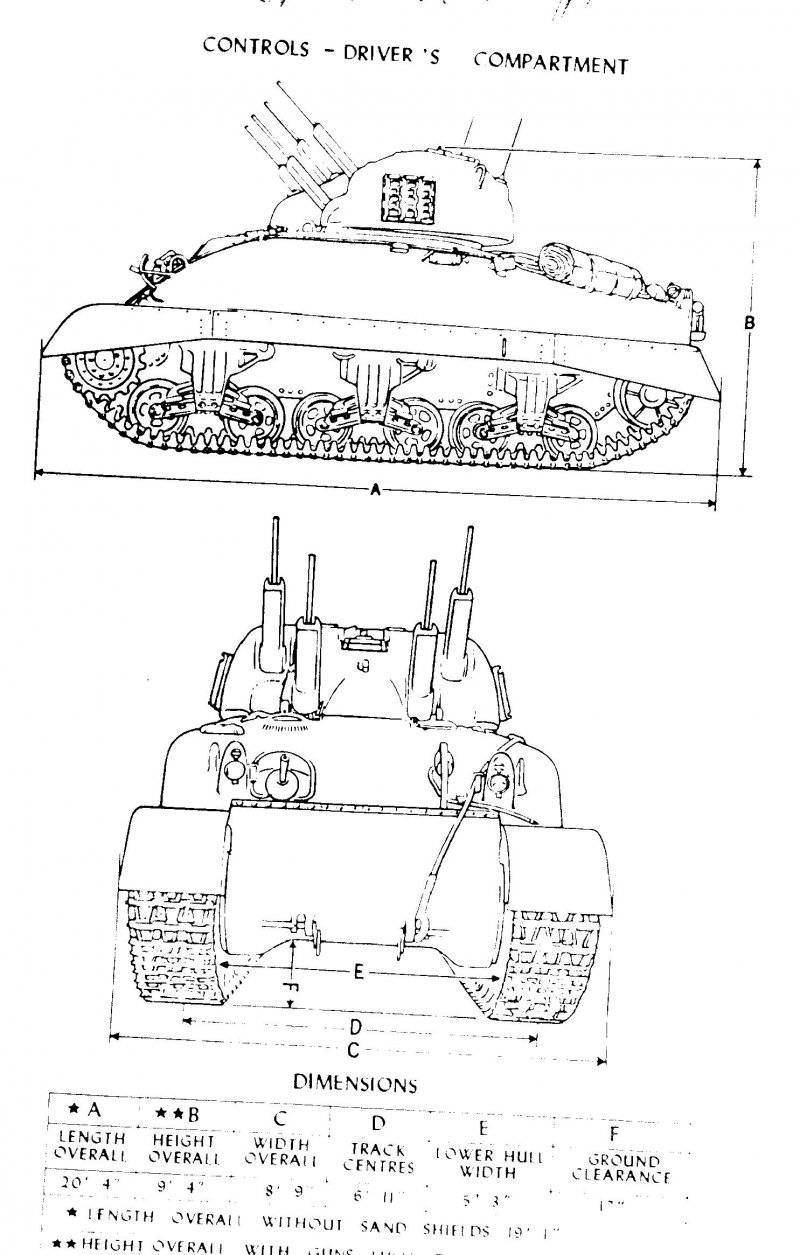 The first tower was immediately installed on the chassis of the Grizzly tank. The body of this chassis was assembled from armor plates by welding. The frontal armor of the hull had a thickness of 51 mm, onboard - 38 mm. Such protection allowed a promising anti-aircraft self-propelled gun to operate in the same battle formations with the Grizzly or M4 Sherman tanks. Both versions of the turret had frontal armor 76 mm thick and sides 51 mm thick. The ZSU “Skink” chassis was not subjected to any serious modifications and therefore had the same layout as the American-made M4 base tank. The aft of the hull housed the gasoline engine Continental R-975С-1, power 353 hp The mechanical transmission transmitted torque to the drive wheels in front of the hull. The basis of the chassis were three (on each side) support carts with two support rollers and one supporting roller each. On the chassis used tracks CDP system.

Skink tower had a characteristic shape with a "two-story" frontal detail. In the middle part of the frontal part there was a window for the Mk.IX collimator sight, to the left and right of which there were fastening and vertical guidance systems for the guns. For more convenient placement of automatic guns were located "in two floors": the top two were shifted to the sides of the tower, the bottom two - to its middle. It should be noted that the guns of the Polsten company had to be slightly modified before being installed on a new turret. Using hydraulic actuators, the gunner of the guns could fire in any direction in azimuth and lift gun barrels in the range from -5 ° to + 80 °. Each of the four guns had a 650 fire rate per minute (total 2600 shots per minute). As an additional weapon ZSU Skink retained course machine gun mounted in the front chassis sheet.

Features of the combat work promising armored vehicles led to a reduction in crew. In the department of management and the fighting department were the jobs of the driver, gunner, commander and gunner. The latter were located in a double tower. 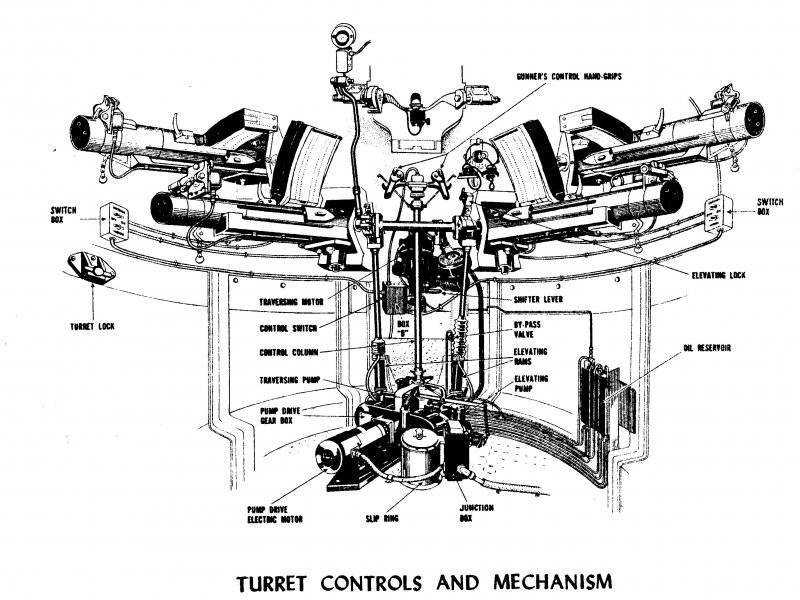 The result of all the work was the self-propelled anti-aircraft installation with a combat mass of more than 25,7 tons. The dimensions of the car remained at the level of the base tank Grizzly, but the height was noticeably reduced: the length of the ZSU was approximately equal to 6,1 meters, width - 2,7 m, height - 2,4 m

The cast tower for the second prototype ZSU Skink was only ready in April 1944. Tests of the two prototypes continued until mid-summer of the same year. At the end of the tests, it was assumed that the industry would build 300 turrets with automatic cannons and install them on tank chassis. It was even signed a contract for the supply of three hundred anti-aircraft self-propelled guns. Soon after D-Day, the real capabilities of the German forces in Western Europe became clear. It turned out that the Luftwaffe is not able to deliver massive strikes on the ground forces of the enemy. As a result, the need for a self-propelled anti-aircraft gun was significantly reduced. In addition, it is impossible not to note the delivery of American ZSU on the basis of armored personnel carriers, which also affected the opinion of Canadian commanders.

In August 44, the final decision was made on the further fate of the Skink project. Order for 300 anti-aircraft self-propelled canceled. By this time, a total of three ZSUs of this type had been built at Canadian enterprises, including two prototype machines. In addition, eight fully equipped towers were ready for installation on the chassis. On this production of towers and self-propelled guns stopped.

Despite the rejection of further production, Skink ZSU still managed to fight. One of the self-propelled guns at the very end of 1944 was sent to the UK, at the temporary base of the 1st Canadian Army. For several weeks, the Canadian military tested the car in a landfill. In early February 1945, she first took part in battles in Europe. Within a month, the only Skink self-propelled anti-aircraft gun managed to visit several Canadian armored units and take part in battles. It is noteworthy that the situation in the West European theater of operations of the Second World War affected the combat work of the Canadian self-propelled guns. Due to the lack of massive raids aviation the armored vehicle had to fight ground targets. ZSU Skink effectively attacked the infantry and light armored vehicles of the German troops.

At the end of the fighting in Europe, all three Skink machines that existed at that time were sent to Canada for temporary storage. Eight collected towers went to storage. Unfortunately, after the war, Canadians dismantled all three self-propelled guns and most of the finished towers. Only two towers with weapons were preserved, one of which became a museum exhibit, and the second got into a private collection.