The fight that wrote Wittman in history

12 May 2018
90
Many who are keen on history World War II, the familiar name of Michael Wittmann - one of the best German tank ases. He can be compared with such famous air aces as Rudel or Pokryshkin, only unlike them he fought on the ground. By June 14, 1944, Wittmann had 138 tanks and 132 guns destroyed, most of which were on the Eastern Front, but the battle that wrote Wittmann in history took place on June 13 in Normandy near the town of Villers-Bocage. 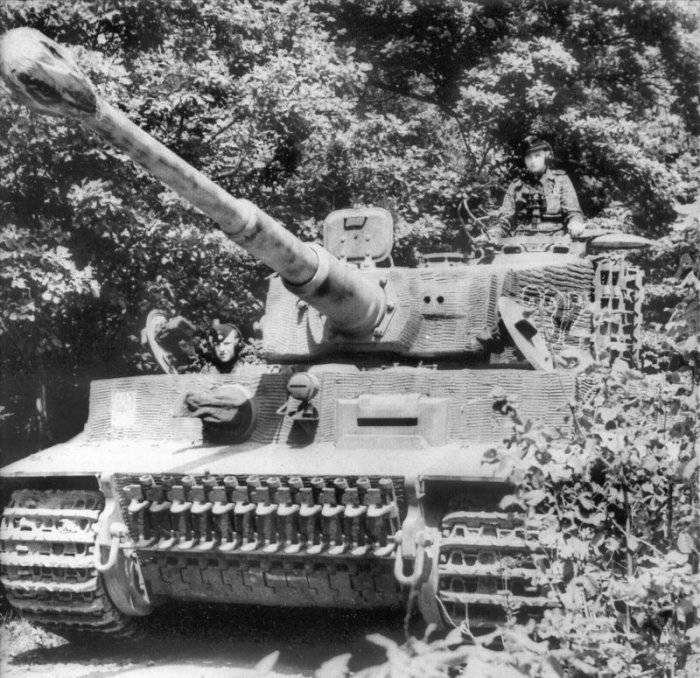 Wittman was born 22 on April 1914, in Bavaria. From 1934, he was in service in the Wehrmacht, from 1936, in the SS forces. He took part in the most successful blitzkrieg operations against Poland, France and Greece. During the invasion of the USSR, he commanded a platoon of assault guns, from 1943 onwards he was given a platoon of Tigers under his command. On the Tigre, Wittman took part in the battle of Kursk. It was with the help of the tank Tiger Wittmann and his crew managed to achieve such significant victories.

Since the spring of 1944, Wittman served in Normandy, under his command was the 2 Company of the 101 Heavy Tank Battalion as part of the 1 Tank Division Leibstandard SS Adolf Hitler. It was with this company that Wittmann conducted his most famous battle, defeating the 7 British Armored Division, which was nicknamed “Desert Rats” for its successes in Africa, near Willer-Bökaz. In this battle, not only Wittmann's skill, but also the superiority of the German Tiger tank over the armored vehicles of the allies was most clearly manifested. During the transient battle, which took less than half an hour, the Wittman tank destroyed allied 11 tanks, 13 armored personnel carriers and 2 anti-tank guns. Largely thanks to the decisive actions of Michael Wittman, the English breakthrough in the direction of Willer-Bocage was eliminated. 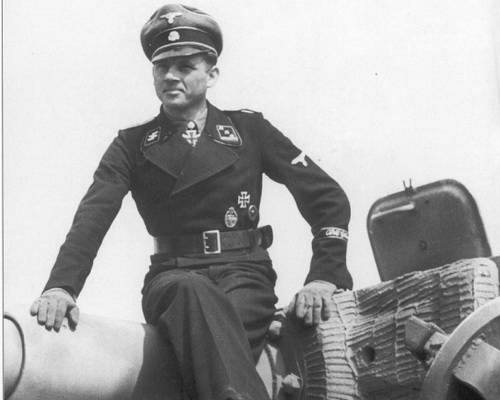 Michael Wittman on his tank
Michael Wittmann died in battle on August 8 1944 of the year. His tank was hit from the air by a rocket launched by the Hawker "Typhoon" Mk.1V attack aircraft. The Royal Air Force. The rocket hit the stern of the hull, pierced the left superradiator grille and exploded. The rocket explosion provoked an explosion in the engine compartment and the detonation of ammunition, an explosion with a Tiger blew off the tower, the entire crew of the tank was killed. By the time of his death, Wittmann was a knight of the Knight's Cross with oak leaves and swords. To emphasize the honor of the award, it is worth noting that only 160 people were awarded the Knight's Cross with oak leaves and swords.

In all, during the war years in Germany, the 1354 Tiger tank was launched. Without a doubt, he was one of the best heavy tanks of the Second World War. Its layout provided very comfortable conditions for the crew’s work, primarily in combat, and made it possible to accommodate all the internal units quite comfortably. The transmission could be serviced from inside the tank. Along with this, its serious repair required the dismantling of the tower.

On the transmission and controls the tank should be said separately. There was nothing even close to the convenience of the driver at that time, the only exception is the Royal Tiger, which had a similar transmission. Due to the use of an automatic hydraulic servo to control a tank weighing 56 tons, it was not necessary to exert any kind of physical effort. Transmission can be switched literally "with two fingers." The rotation of the tank was carried out by an easy turn of the steering wheel. Controlling the tiger was so simple and convenient that any crew member who did not have special skills could cope with it, which was especially important in combat conditions.

It is not necessary to talk in detail about the armament of this tank. The high performance of its 88-mm KwK 36 guns is well known. One can only emphasize that the quality of the used sights fully corresponded to the remarkable characteristics of the gun itself. Zeiss optics allowed German tankers to hit targets at distances up to 4 km. The characteristics of the 88-mm guns - armor penetration, rate of fire, size and weight indicate that in the 1942 year, the Germans made an absolutely correct choice, providing their heavy tank with superior weaponry for the future.

At the same time, at short distances, the Tigr lost its advantage in armor protection and armament. He could not maneuver intensively. Here, its main drawback was affected - an excessively large mass, which was associated with the irrational arrangement of the armor plates of the hull, as well as the use of a running gear with the use of a chessboard arrangement of rollers.

By placing armor plates with rational inclinations, the designers of the Panthers were able to achieve almost similar to the heavier Tigger protection parameters, significantly reducing the tank mass (by almost 13 tons). Chassis with the use of chess location of rollers had a number of significant advantages - smoothness, less wear rubber bands. But at the same time it was very difficult to operate and produce, and also had a lot of weight. The mass of the Tiger rollers was 7 t., Whereas the Soviet heavy tank IS-2 had this indicator equal to 3,5 t.

A week after the Allied landings in France, the company under the command of Wittmann was located at an altitude of No. 213 near the town of Ville-Bocage. After a march from the city of Beauvais under continuous allied raids aviation Wittmann's 2nd company suffered losses and included 6 tigers. From June 12 to 13, the company was preparing for battle. The entire 101 heavy battalion was tasked with preventing the British from breaking into the flank and rear of the Training Tank Division, as well as keeping the road to Caen under control.

At around 8 in the morning on 13 June, Wittmann noticed a column of English armored vehicles moving along the road near Willer-Bocage, about 150-200 meters from his position. Wittman did not have all the combat information, he only outlined the situation in this sector of the front. As spellbound, he watched a convoy of Cromwell and Sherman, moving accompanied by armored personnel carriers Bren Carrier towards Caen. Before Wittmann was the vanguard of the famous British division "Desert Rats." Wittman radioed the battalion headquarters, reported on the situation and requested reinforcements. However, he did not passively observe what was happening and decided to attack the column alone. He understood that under normal conditions he would not have a single chance. Under all the laws of war, with a simple balance of forces, his attack looked like a sophisticated way of suicide.

After the battle, Wittman said: “It was very difficult to decide on the attack. Never before have I been so impressed with the power of my opponents as when I was watching the column of armored vehicles going to Kahn. And yet I decided to attack. " 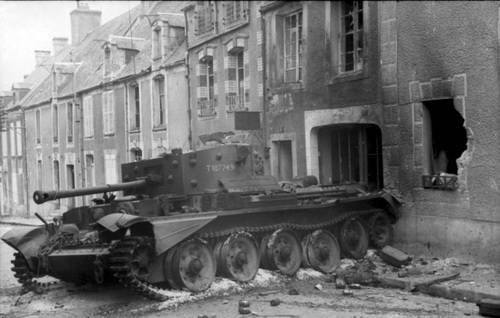 One of the Cromwells destroyed in Willer-Bocage
Wittman started his masked Tiger with the number 205, but he had a problem with the engine. Then he quickly moved into the car under the number 212, gave the rest of the company’s tanks an order to hold positions, and he himself moved towards the convoy. Having approached 100 meters with her, he opened fire and with the first two shots he destroyed Sherman and Cromwell at the head of the column, then he set fire to the tank in her tail, thereby eliminating the rest. After that, he transferred the fire to armored personnel carriers in the center. Wittman destroyed everything that appeared in his area of ​​visibility. Attacking the fixed targets, he sent a projectile behind the projectile at tanks and armored personnel carriers almost at close range, from the shortest distances, and at the end rammed Cromwell's tank in the side, which blocked his entrance to the city.

Wittman sent his tank to the center of Willer-Bocage, where he also destroyed the 3 tank of the headquarters group of the 4 regiment of the 22 armor reggae, one tank of this group survived, as the driver had taken it from the street to the garden in time. The tank was not able to open fire, the gunner at that time was out of the car. The commander of one of the Shermans, 30-year-old Stan Lockwood, hearing the shooting that had started in the city, moved towards the battle. In 200 meters ahead of him, he found Tiger of Wittman, who stood by him and ran a quick fire along one of the streets. Lockwood's gunner managed to fire four shells on Tigger. One of them tore the tank track. The Germans returned fire did not make them wait, with their shots the crew of the Tigris brought down half of the building on Sherman, plunging the battlefield into clouds of dust. Wittman continued to fire from the immobilized tank, destroying everything that appeared in his area of ​​visibility. In the end, he destroyed the fourth Cromwell staff group of the 4 regiment. Picking up a gunner, he decided to attack the Tiger from behind, but in the end was hit. After some time, Wittmann and his crew had to leave the padded car and walk away from the city. Wittman believed that he would come back and take his tank.

So in the end it happened. By evening, the Germans fully occupied Viller-Bocage. On the outskirts of the city and on its streets, the British lost 25 tanks, 14 semi-tracked armored personnel carriers M9A1 and 14 armored personnel carriers Bren Carrier, as well as hundreds of soldiers. The German 101 heavy tank battalion lost the capture of the 6 town of Tiger precious tanks, but it frightened the British so much that they were very careful many weeks later and almost did not attack the city.