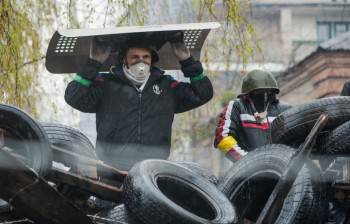 Back in the 90s, some futurologists predicted that revolutionary changes in the world order would occur at the moment when Russia began to collect the lands of the "Eurasian Heartland." Of course imagine then Tankssent by the nationalist Kiev government to pacify the Russian-speaking East of Ukraine was impossible. “This is not the Arab world, and not even the Balkans,” political scientists said. Yes, in a country that paradoxically broke away from the “Russian empire”, there are ethnic (or rather, historical) contradictions, but they can be completely resolved in a civilized way.


It is possible, only this is unprofitable for Western countries, which immediately after the collapse of the USSR began to prepare for a war for the Soviet inheritance, growing up a nationalist hydra in Ukraine. And now the punishers from the “Right Sector”, who proclaimed themselves the heirs of Stepan Bandera, are preparing to storm the city with the symbolic name Slavyansk. Mercenaries from the American private company Greystone participate in suppressing the insurgency in the pro-Russian regions. However, the East of Ukraine is unlikely to submit to the Kiev authorities. Indeed, after the annexation of the Crimea to Russia, people here realized that there was someone to stand up for them and, at least in the post-Soviet space, Moscow does not intend to reckon with Washington. If the East survives, as Bashar al-Assad managed to do in Syria, America will have to say goodbye to the monopoly on power and the status of the world hegemon. We will witness the collapse of Pax Americana and the formation of a multipolar world in which not one, but several subjects have the political will.

To the "concert of the great powers"?

Neither 11 of September, nor the invasion of Americans into Iraq, nor the revolutionary ferment of the “Arab spring” became the watershed that would mark the transition to a fundamentally new world order. The attacks in New York and Washington, on the one hand, demonstrated the vulnerability of the United States, but on the other, they gave an excuse for expanding and strengthening Pax Americana. The Iraqi epic questioned the effectiveness of the international institutions on which the Yalta-Potsdam system was founded, and seemed to create the preconditions for the formation of the new “imperial” principles of the world order.

The "Arab Spring," essentially meant the failure of Washington's popular concept of "controlled chaos." Chaos in the Middle East failed to “control”. And Americans increasingly began to appeal to the experience of the 19th century, when Britain, unable to cope with the role of the world gendarme, began to shift part of the responsibility for governing the world to large regional powers. Barack Obama prayed that other players share with America the overwhelming burden "laid upon her by history." And Putin’s Eurasian integration project was largely a response to these pleas. After all, in theory, the collection of lands around Russia fits well with the concept of the formation of regional blocs that ensure the stability of the world order. The concept, which became a kind of reincarnation of the idea of ​​a "concert of great powers", popular in the 19th century. Moreover, Putin approached the implementation of the Eurasian project with his inherent pragmatism; It was impossible to reproach Moscow with revanchist sentiments, no matter what Western Russophobic political scientists say.

And at the beginning of 2014, a coup occurs in Kiev. The coup, behind which, obviously, are the Americans. And which is forcing Moscow, which did not want to before this revolutionary changes in the world order, go all-in, giving strong support to the south-eastern provinces of Ukraine and, in fact, leaving no room for compromise with Europe and the United States.

Kiev Maidan, it seems, will become that point of bifurcation, having passed that, history will finally overcome stereotypical schemes of the Cold War period and the era of unilateral US domination that followed.

US geopolitical plans: Russia without Ukraine

So far, however, the Ukrainian crisis has become a celebration of dogmatic supporters of Pax Americana, who criticized Obama for a pragmatic revolution in foreign policy. They still perceive the world as an arena for geopolitical games and are seeking to revive strategic plans developed in Washington after the end of the Cold War. “If the United States managed to establish itself in Ukraine, Russia would remain defenseless,” wrote George Friedman, the creator of the private intelligence and analysis company Stratfor (which in America is also called the “shadow CIA”), at the beginning of the 2000s. - The entire south-western Russian border from Belarus would be open. Moreover, the distance from the eastern borders of Ukraine to Kazakhstan is less than 400 miles, and this neck, along which material and human flows go to the south of the Russian Federation, would be controlled by NATO, which could potentially lead to the separation of the southern regions from Russia and its further fragmentation. ” .

One of the key tasks that American military strategists set for themselves in the post-Soviet space is to minimize the operational capabilities of the Russian fleet in the Black Sea and turn the Crimea (primarily Sevastopol) into its zone of influence. That is why the decision to join the peninsula to Russia caused such a storm in the conservative brain trusts of the United States.

It seems that the time has come again for imperial fanatics like former Pentagon chief Donald Rumsfeld, who said recently that the Obama administration has lost ground wherever possible: in Afghanistan, Syria, Iran, and now in the post-Soviet space. “A trained monkey would do better,” he concluded.

Wanting to prove that he is not worse than a “trained monkey”, the US president clearly goes too far, trying to take Russia to fear. As a result, the rhetoric of a democratic administration goes far beyond what it can actually do. Paralyzing sanctions about which Obama constantly cruises, will not be introduced. The American mercenaries, however threatening they may look, are unlikely to force the East of Ukraine that has risen against the "revolutionary" government to retreat. “Unfortunately, the US president is repeating the same mistake that he made in Syria six months ago,” writes Eurasia group president Ian Bremmer. - Then he did not fulfill his threat, forcing the world to doubt the power of the United States. Now he risks losing the confidence of most of the leading players. Indeed, unlike Moscow, Ukraine does not play any role for Washington, and the Americans will not fight for it. This means that the key interests of Russia, the limited capabilities of America and the permanent end of empty threats must be recognized. ”

"The sanctions in fact will affect the West to the same extent as the East," said the patriarch of German politics Helmut Schmidt, who served as German chancellor from 1974 to 1982 a year, recently. And it is no coincidence that a couple of weeks ago Putin accepted the head of the German Siemens concern Joe Kazer in Novo-Ogaryovo (only last year Russian contracts brought his company several billion euros).

And while the Americans are threatening to “export shale gas in volumes that exceed consumption in Europe,” it is hard to believe. Let's just imagine how many years it will take to build gas-liquefying plants in the United States, tankers for transporting liquefied gas and ports for its shipment? In addition, if the price of Russian gas is at the level of 380 dollars per 1000 cubic meters, the price of American gas will be close to the mark of 500 dollars. You should not count on the countries of the Persian Gulf, which, according to some European analysts, will be able to recover losses from Russian gas. They have obligations under existing contracts, and it is impossible to change the geography of supplies overnight.

Understanding that by interrupting relations with Russia, they will never get out of the crisis, European countries frantically try to save face and are developing ridiculous sanctions packages that have already been dubbed in the Western media as a “pinprick”. No less pathetic are the sanctions imposed by America. And it is not surprising that Moscow, contrary to diplomatic traditions, did not respond to the attacks of the West with symmetrical sanctions.

Obviously, Russia does not intend to back down. One should not wait for compromises in the traditional western understanding of this word, when a regional power agrees with the conditions imposed by the so-called “international community” (a euphemism, under which the leading Western countries have long been hidden). Ukraine has always been seen as the most important bridgehead, on which the distribution of forces in Europe and the physical security of Russia depend. And because Moscow will support antimaydanovtsev in the south-eastern regions of the country, in spite of any costs.

In addition, we should not forget that over the past 20 years, Russia has subsidized Ukraine by approximately 200 – 300 billion dollars, supplying it with natural gas at preferential prices. And at the end of last year, when the Ukrainian economy was on the verge of collapse, only help from the Russian Federation saved the situation. And even the IMF managing director Christine Lagarde is ready to admit. Neither America nor Europe is going to care so much about the Ukrainian "allies." Their fate worries the West only in connection with the confrontation with Russia, pleasantly tickling nerves to local politicians who are starving for the dramatic collisions of the Cold War.

It should be noted at the same time that the Russian ruling elite does not seek a global conflict with America. She only hopes to formulate her own Monroe doctrine, to outline the lands that she considers vital for herself. But Russia is in no hurry to curtail cooperation with the United States. The approach here is extremely pragmatic: if the interests of the two countries coincide (for example, when it comes to mastering the Arctic shelf or reducing nuclear weapons), Moscow is ready to cooperate with Washington, but if contradictions arise, it acts on its own discretion: tough and uncompromising.

Ctrl Enter
Noticed oshЫbku Highlight text and press. Ctrl + Enter
We are
The world we leave, the world we enter, and the world between themUnipolar world modeled on Pax Americana ("Rebelion", Spain)
Military Reviewin Yandex News
Military Reviewin Google News
90 comments
Information
Dear reader, to leave comments on the publication, you must sign in.