April 21 2014
129
On the MIA website Ukraine suddenly appeared an appeal to the soldiers of the special unit "Berkut" with a call to participate in the protection of law and order. In it "Golden eagle" not only called to return, but also congratulated on Easter:

We, the members of the Collegium of the Ministry of Internal Affairs of Ukraine, appeal first of all to former employees of the “Berkut”. You have always been the elite of the forces of law and order. You did not spare your strength and life to protect people. Now Mother Ukraine needs your help and participation as never before. Let yesterday "Golden Eagle" and "Self-defense" were on opposite sides of the barricades. Now, in the face of external aggression, all citizens should remember that they are children of a single Ukrainian land, forget all mutual insults, quench all personal ambitions.

But according to RIA News The soldiers of the special unit "Berkut" are unlikely to come back because of a lack of confidence in the government. 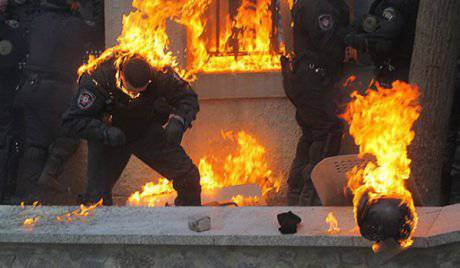 Alexey Lobarev, who is the head of the headquarters for the reception and placement of Berkut employees in Russia, said:

I think the return is impossible, because the employees of "Berkut" very much inherited. They were mocked, disbanded, killed, even their family members were killed. Therefore, it is very difficult for them to believe in the opposite today.

Recall, the law on the disbandment of the "Berkut" was adopted by the self-proclaimed authorities of Ukraine one of the first after the coup d'état.
Ctrl Enter
Noticed oshЫbku Highlight text and press. Ctrl + Enter
We are
Veteran of "Berkut": the National Guard of Ukraine is a soap bubble
Military Reviewin Yandex News
Military Reviewin Google News
129 comments
Information
Dear reader, to leave comments on the publication, you must sign in.