The US wants to take away Putin’s personal fortune

April 22 2014
245
The British newspaper The Times argues on whether the United States can impose sanctions on Putin’s personal fortune (about forty billion dollars), on condition that they find him in Europe, or rather in Switzerland. The relevant US Treasury Department for the fight against terrorism and financial intelligence to search for Putin’s billions is ready and awaiting orders. How can Americans look for Putin’s money anywhere in Zurich? But they can not. But, on the other hand, they can track payments made in their own currency, in dollars, and going through US banks. In addition, Washington is counting on understanding in Swiss banks. 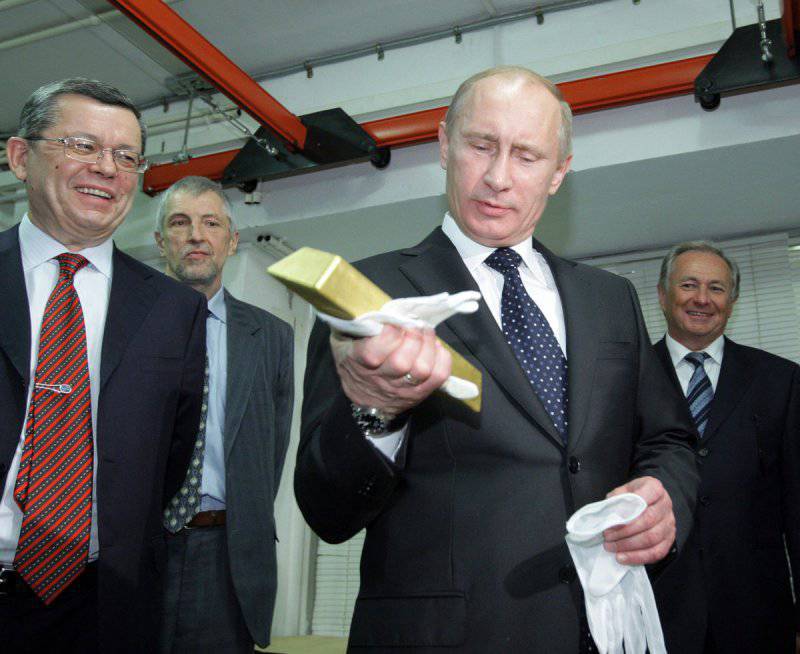 Take everything away from Putin

In a survey of British media made by the television and radio broadcasting corporation "BBC"among other things, it tells about how the United States viewed the introduction of new tough sanctions directly against the Kremlin. US officials say they’ve considered freezing Putin’s assets. About this newspaper "Times".

V. V.P. spoke about freezing of foreign assets at the negotiations in Geneva (on Thursday last week). They wanted to “sanction” the Kremlin’s master in the event that attempts to resolve the Ukrainian crisis would be a dead end.

According to The Times, European countries do not seem to have agreed on this new phase of sanctions. Of course, the United States was ready to play a “personal card” against Putin if he decided to send troops to the eastern regions of Ukraine. The United States depends on Russia to a lesser extent than Europe (this is not about political, but about economic dependence).

The Times writes that allegedly the leader of Russia holds 40 billion dollars in Swiss bank accounts. Scouts from the West admit that Putin’s source of wealth is large stakes in Russian energy companies. However, according to unnamed American sources, Putin’s assets are probably registered in someone else’s name.

However, the US Treasury Department has special investigative powers. The search for billions can be taken up by the special department of the Ministry of Finance for combating terrorism and financial intelligence.

True, this serious and powerful state institution has one limitation.

The American Ministry of Finance, the newspaper reminds, can conduct an investigation only on those assets that are in the American banks. However, those who try to transfer funds in order to avoid sanctions will conduct operations mainly in dollars. And the transactions will pass through US banks, and this will enable the Treasury Department to block money - even if foreign banks refuse to cooperate with Washington.

This is not all. The Ministry of Finance is also waiting for understanding from the Swiss banks. "We can not twist the hands of banks, but if an individual came under sanctions, we hope to cooperate," - quoted "Times" some sources in the US Treasury.

Cyprus is not lucky again

As the correspondent noted "BBC" D. Bulin (Moscow), Cyprus may suffer from sanctions against Russia. The fact that in the case of large-scale economic sanctions against Russia, Cyprus may face serious difficulties, said Foreign Minister of this island state Ioannis Kasoulides. Despite the banking crisis last year, the Russians remained the main investors in the Cyprus economy.

In an interview with the German newspaper “Welt”, the Minister said: “In fact, the economic ties between Cyprus and Russia are very strong, as well as with the Netherlands and other countries. Therefore, sanctions against Russia can destroy the Cyprus economy. "

However, how can sanctions against Russia strike Cyprus?

In 2013, the international rating agency Moody's made some calculations. It turned out, the correspondent notes that from one third to one half of all bank deposits on the island are of Russian origin. Total is 31 billion dollars (12 billion - interbank deposits, 19 billion - corporate and individual accounts).

However, this negative scenario, according to experts BBC surveyed, is unlikely. The EU is interested in cooperation with Russia, and the Kremlin is not taking active steps in eastern Ukraine.

April 21 appeared in the media interesting news, also related to the issue of sanctions. It turns out that Washington threw the bait in fraternal China. True, I did not catch anything.

As transmits "Sight"At the end of March, the White House tried to put pressure on Beijing and urged it to join the sanctions against Russia. But China considered the pressure outrageous and refused to impose restrictions against Moscow.

About this “Kommersant” told a Russian diplomatic source.

According to the publication, the State Department and the staff of the US Embassy in Beijing interacted with the leadership of China, and Barack Obama March 24 tried to persuade the Chinese leadership to publicly condemn the actions of Russia in Crimea.

The so-called “closed” meeting of Barack Obama and Xi Jinping was held on the margins of the March G7 summit in The Hague. The American president told the Chinese leader about the next steps that the US and Europe are ready to take in response to the actions of the Russian Federation. “He made it very clear that the issue of the political and economic isolation of Moscow has already been resolved and such actions are unanimously supported by all G7 members and all NATO members,” an unnamed source close to the State Department told Kommersant. At the same time, the White House realized that Beijing would not join the sanctions against Russia. “It was clear that the leadership of the PRC was not ready for such decisive actions,” said a source.

Therefore, Washington today is content with the current position of Beijing: the Chinese authorities do not criticize the actions of the Russian Federation, but state the need to preserve the territorial integrity of Ukraine. Explaining to the representatives of the Russian Federation their decision to abstain during the voting on the situation with the Crimea in the Security Council and the UN General Assembly, the Chinese authorities pointed out problems with Taiwan, the Xinjiang Uygur Autonomous Region and Tibet. They also spoke about the observance of international law.

The newspaper "Vzglyad" also notes that, according to the New York Times, due to numerous disagreements with Russia, the United States completely reconsiders relations with the Kremlin.

Washington is preparing to return to a “policy of containment”, which involves cooperation with Russia in those few areas where the interests of the two states coincide, and ignoring Moscow in the system of international relations.

And what is the result?

But in the end it becomes clear that the United States is leading a “cold war” against Russia today in splendid isolation. However, there is no pride in this loneliness: China was outraged and did not approve of US policy. "Understanding" from the Swiss banks in Washington, too, can not wait.

With his ridiculous behavior, built on the monstrous strategic assumption that Russians need to be laid in the Procrustean bed of American democracy, truncating them with all the excess, Obama and his little old ministers got stuck somewhere in the sixties and seventies of the last century.