Slavyansk: detained one of the participants in the attack on the roadblock 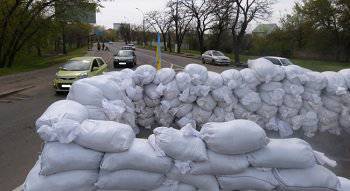 According to the LifeNews, Slavyansk self-defense activists detained Vitaly Kovalchuk, a member of the Right Sector nationalist group, who was involved in the attack on the checkpoint. The detainee said that if he was released, he would dissuade the rest of the organization to come to the south-east of Ukraine.


The radical said: “Here my friends from the Right Sector will be killed, they will not play with them here. Everything is real. Here is the war. People here are protecting their land, protecting their home, and they are right. ”

As reported by the TV channel "Russia 24", as a result of a night attack on a roadblock, five people died. Another was seriously wounded. Local activists seized two cars in which there was the symbolism of the “Right Sector”, maps based on aerial photography, and weaponwhich is not in service with the army of Ukraine.

However, according to the agency Interfax-Ukraine, representatives of the Security Service of Ukraine stated that “according to the results of the investigation of a night clash at a checkpoint in Slavyansk (Donetsk region), it was established that there was no other organization in the city except those supported by the Main Intelligence Directorate of the Armed Forces of the Russian Federation”. They called the incident a “cynical provocation,” since “as a result of the re-enactment of an external attack on the roadblock and the shooting of several cars, a man was killed.”

As the rusvesna.su, at the moment in Slavyansk calm, although the militia several times went to check reports of shootings, mined cars and provocateurs. But the information was not confirmed.

As noted by Interfax-Ukraine, in the near future, observer teams from the OSCE monitoring mission in Ukraine will be sent to Slavyansk. This was announced by the head of the mission’s press office, Michael Botsyurkiv.

It is worth noting that 20 of April in Slavyansk was detained by the ardent Euromaidan activist Irma Krat, who said she had come to Slavyansk to “tell the impartial truth”.