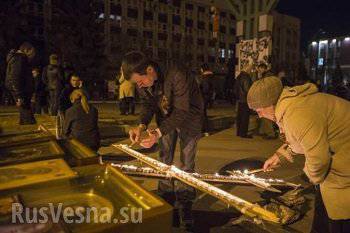 As the rusvesna.su, 20 April Representatives of the Resistance gathered at the Security Service of Ukraine in Lugansk.


The leader of the Southeastern Army, Vitaly Bolotov, who reported on the creation of a joint headquarters for managing the regions of the Southeast with a center in the city of Donetsk, addressed all those present.

Bolotov said: “Today, the Luhansk region is the only one of all areas that has come very close to the tasks that we are now trying to accomplish. That is, to the referendum, the Russian language and everything else. Therefore, we must set an example in this. That is, as we first raised the banner throughout the Southeast in order for it to stand, now we must show by example how to reach the tasks that we set for ourselves. ”

Ctrl Enter
Noticed oshЫbku Highlight text and press. Ctrl + Enter
We are
Reports from the militia of New Russia for 27-28 September 2014 of the year
Military Reviewin Yandex News
Military Reviewin Google News
85 comments
Information
Dear reader, to leave comments on the publication, you must sign in.