Managing the weather is the key to military superiority 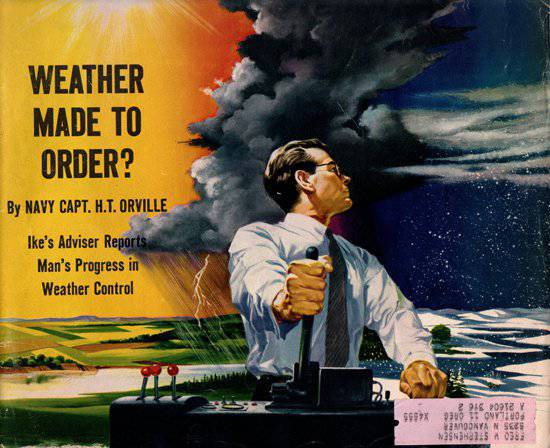 “We will be able to see the enemy day and night, in any weather. And we will ruthlessly pursue him. "
- General Gordon Sullivan

In the 1996, the US Air Force report, “Weather as a Force Multiplier: Possession of Weather in the 2025 Year,” was published, giving rise to many subtle conspiracy hypotheses and assumptions on the creation of climate weapons. I bring to your attention a review of this report.

What is the meaning of climate weapons?
How to strengthen your own army and weaken the enemy army?
Does this force have a “dark side”?
What threats can interfere with natural climate formation mechanisms?

Climate control is the old dream of humanity. Anyone who can gain access to the immense forces of nature will gain control over any situation. From the point of view of modern military science, “weather management” does not imply the creation of controlled super-power tornadoes or typhoons capable of sweeping away all the cities on the coast of the enemy. Everything looks much more prosaic. In a general sense, weathering is necessary to solve two main problems:

1. Aid friendly forces.
2. The weakening of the armed forces of the enemy.

The first point is the creation of favorable weather conditions to facilitate the conduct of hostilities. Visibility Improvement. Ensuring safe, friendly operation aviation. Eliminating interference and improving the quality of radio communications. Also, in this list there is accurate weather forecasting and opposition to possible attempts to influence the weather by the enemy.

The opposite task (weakening the enemy) is achieved thanks to a set of the following measures:
- artificially increasing the level of precipitation in order to call in floods and paralyze the enemy’s transport communications;
- artificial reduction of precipitation, in order to call for drought in enemy territories and difficulties in the supply of fresh water;
- create adverse weather conditions that complicate the maintenance of the database: increased wind speed, deterioration of visibility;
- violation of radiolocation and radio communication by direct influence on the Earth’s ionosphere. 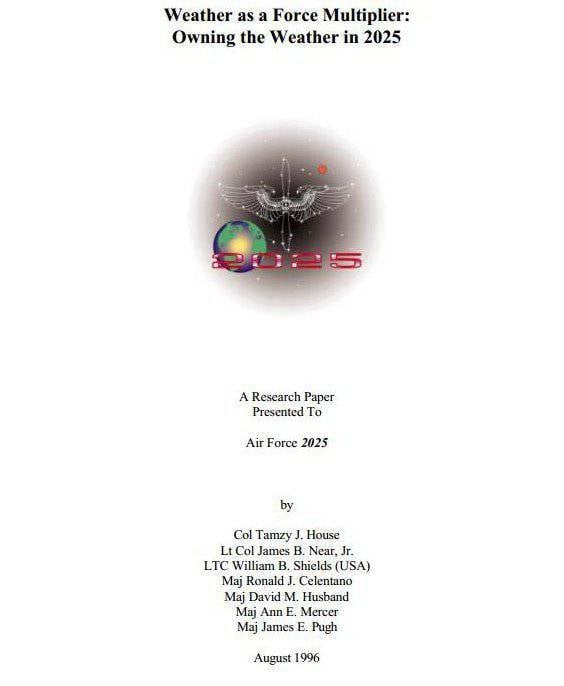 Further - a brief technical note. Description of technologies and methods by which atmospheric processes can be controlled.

Spraying silver iodide crystals, liquid nitrogen floating crystals, dry ice from an aircraft is a well-known method that is regularly used to provide clear, cloudless weather over certain parts of the earth (most often above capitals on large public holidays). This way of “breaking up the clouds” has already proven its effectiveness in practice, but the use of “chemistry” is unsafe and has many negative side effects. In the future, laser radiation is supposed to be used to influence atmospheric moisture.

For a radical increase in the rate of precipitation over a given area of ​​the earth, a direct impact on the evaporation of moisture by spraying coal dust over water is possible. This increases the absorption of solar radiation and contributes to enhanced heating of the surrounding water and air. Which, in turn, accelerates the evaporation process and the formation of rain clouds. The method is suitable for use in coastal areas, with accurate information on the direction of monsoon winds.

B) fog. The main enemy of aviation.

There are two main types of fog.

Ice fogs formed by microdispersed ice particles at air temperatures below 0 ° С. The main way to combat this phenomenon is the use of chemical reagents that increase the size of ice crystals.

More often, one encounters “ordinary” mists that arise when moisture evaporates from a warmer evaporating surface into the cold air above water bodies and wet land areas. This problem has two solutions:

Heating of the ambient air. The experiments convincingly proved the possibility of fog scattering using microwave or laser radiation. Insignificant heating of the surrounding space prevents condensation. When the intensity of the radiation 1 W / sq. see the laser is capable of 20 seconds "clear" from the fog 400 meters of the runway. The method has not been applied in practice due to its high cost and the need for high energy consumption.

Another way to deal with mists is through the use of chemicals that absorb moisture and lower the relative humidity of the surrounding air.

Every second in the atmosphere of the Earth, 2 rains thousands of thunderstorms - often with heavy precipitation and squally wind, which poses a considerable threat to the population and infrastructure of those territories over which the destructive cyclone sweeps. The power of the strongest tropical hurricanes may be equivalent to 10 000 thermonuclear bombs of megaton power. The Yankees are familiar with the terrible consequences of these natural disasters, feeling all this in their own "skin." The report provides information on how, in 1992, Hurricane Andrew "blew off" Homestead (Florida) from the face of the earth.

How to learn to control the destructive elements? How to turn the forces of nature into a weapon, while reducing the risk of a typhoon collapsing into its own territory?

The USAF does not know the exact answer. Artificially creating instabilities in the atmosphere by evaporating huge amounts of water or heating up clouds that form over the ocean — theoretically, this would allow the creation of “man-made” cyclones. But the practical implementation of this idea is still in question.

Obviously, elemental control is still beyond human capabilities - and this situation is unlikely to be resolved in any other way before the 2025 year. As for the protection of aircraft while flying through a thunderhead, then "saving the drowning is the work of the drowning themselves." The only reliable way to avoid aviation accidents is to work on improving the lightning protection of aircraft electronic equipment.

D) Impact on the ionosphere

The ionosphere is the upper part of the Earth’s atmosphere, highly ionized due to its irradiation with cosmic rays. The greatest practical interest is related to the so-called. “A layer of Kennelly - Heaviside”, located at altitudes 60-90 km. Due to the high plasma density, the state of this layer has a great effect on radio communication at medium and short waves. Of no less interest is the “F layer” lying at altitudes of 150-200 km. Due to the ability of the F layer to reflect short-wave radio signals, the existence of over-the-horizon radars and HF radio communication systems at long distances becomes possible. 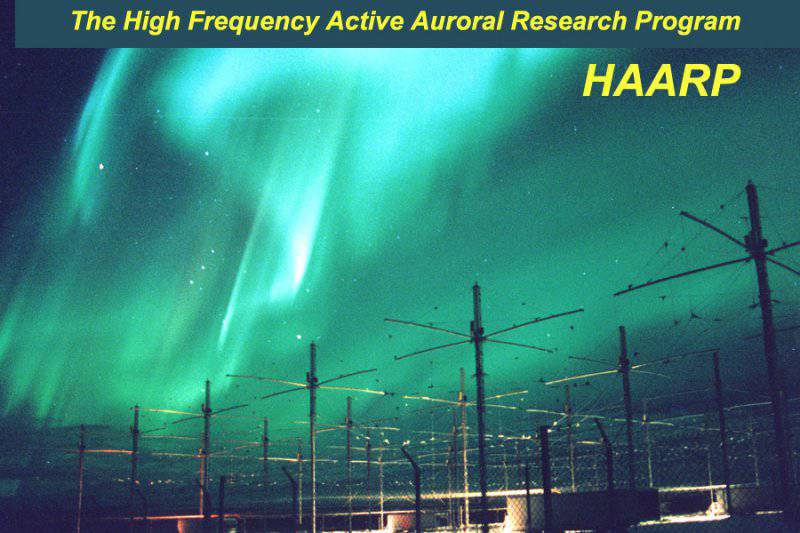 Artificially exciting various sites of the ionosphere can achieve various positive or negative effects. Spraying large volumes of gas or heating certain parts of the ionosphere using microwave radiation and radio waves of the HF range allows you to create giant "plasma lenses" in the ionosphere, used as reflective screens to improve the quality of long-distance radio communications and increase the reliability of over-the-horizon radar systems. Or, on the contrary, to make the ionosphere unstable and opaque by disrupting the communication system of the enemy.

For the first time the possibility of creating such "lenses" was expressed by the Soviet scientist A.V. Gurevich back in the middle of 70's.

Despite the obvious nature of the report, the idea of ​​artificial "climate control" found the widest response among the masses, causing many assumptions, phobias and hypotheses from the "conspiracy theories" cycle. The most famous was the urban legend of chemtrails (chemtrail conspiracy). 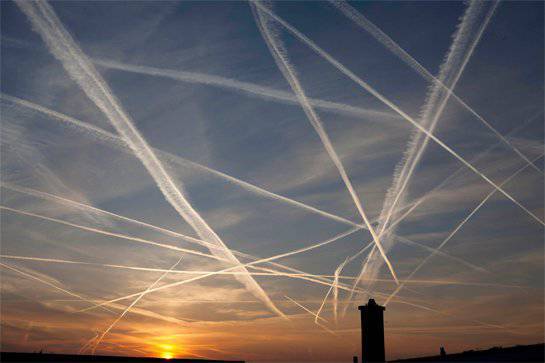 According to the supporters of this hypothesis, the secret world government is implementing a program to spray some strange "chemicals" over the cities of the Earth with the help of passenger aircraft. Numerous eyewitnesses claim that they saw in the sky strange traces left after the passage of jet airliners. Unlike conventional condensation (inversion) traces, chemtrails do not disappear within a few minutes, but on the contrary they expand until they turn into cirrus clouds. Sometimes in the sky you can see a whole lattice of such lines. After that, barium and aluminum salts, polymer fibers, thorium, silicon carbide or various substances of organic origin are allegedly found on the ground, and the people who are trapped under the chemtrail deteriorate.

The true purpose of the chemtrail remains unknown. The most popular assumptions link their appearance with climate control, a global program to control the population of the Earth, create special conditions for radar work, or test biological weapons.

Proponents of the scientific approach explain the emergence of chemtrails with ordinary condensation trails of airliners, which, under certain weather conditions, may not really dissipate over a long period of time. A grid of whitish tracks and numerous parallel lines arise from the fact that the planes are moving along the same air corridor. And spraying any chemical. substances from such high altitudes (over 10 km) look like a completely unpromising activity. 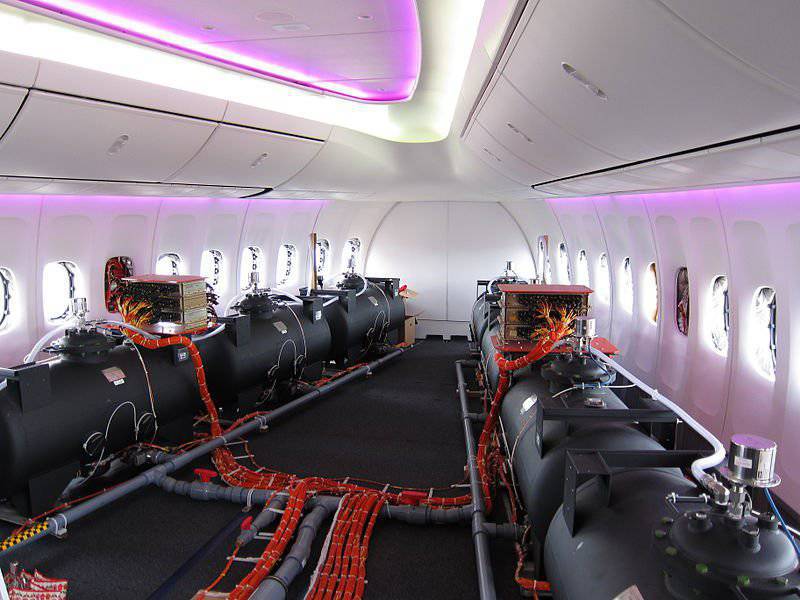 Photographs of airliners with strange cisterns and pipelines installed inside the Internet also had their rational explanation. These are not secret dispensers; photos taken during the flight test. Water tanks are used to test various aircraft alignments.

And, nevertheless, questions remain. The view of the “chemtrail” intersecting in the sky leaves no one indifferent. 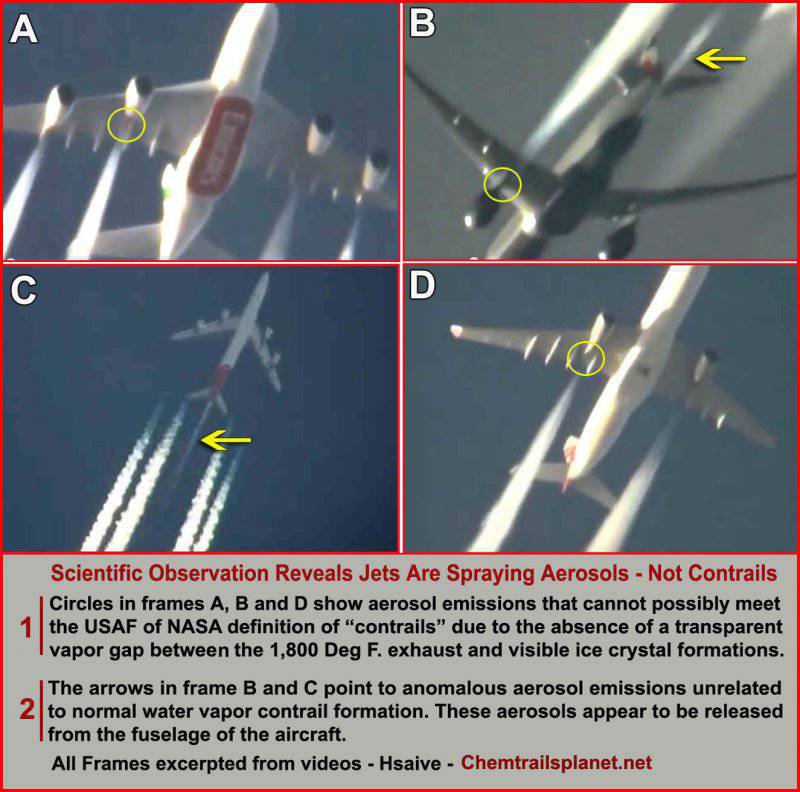