Aircraft carriers and the main directions of construction of the Navy 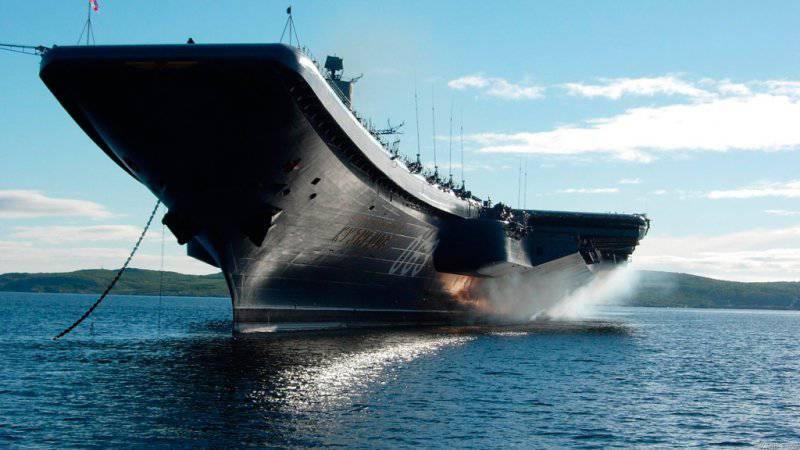 The controversy continues: do aircraft carriers (AV) need Russia? They are usually considered offensive. weapons. AVs allow you to transfer power across the ocean. The need for aircraft carriers can be identified when considering the hypothetical possibility of Russia conducting an offensive operation against the United States.

The basis of the general purpose forces of the US Navy are 10-11 AUG and the corresponding number of heavy ABs. Plus 8 in reserve (1 atomic and 7 non-nuclear). Total - to 18-19 AB. In the current US Air Force there are 2157 combat aircraft. More than a thousand aircraft - in the Air Force National Guard and 1486 in the AMARG - in storage. Plus the Air Force Command of the Marine Corps (ILC). The number of US Air Force combat aircraft will be limited to 2157, although the potential enemy will actually have significantly more aircraft.

How many combat aircraft will the Russian Air Force be able to counter? In North America, we have not only not a single military base, but also a single logistics point. We have no allies there. In air-ground operations (UPD) against Iraq (twice), Afghanistan, Yugoslavia, the Americans had a sufficient number of bases (their own and allies), on which they deployed advance groups (up to six months) of up to a million people. We will not be able to create anything like this at present and in the coming decades in North America. In this case, an air offensive operation can only be carried out by deck and strategic forces. aviation. That is, practically without a huge part of the Russian Air Force. The latter will be forced to confront (Article 5 of the NATO Treaty) the NATO Air Force (without the United States). In the continental United States (except Alaska), only 16 TU-160 and 32 plus 60 can operate in the reserve of TU-95MS Air Force, 18 SU-33 or 24 MIG-29K / KUB (in the future) with the Admiral Kuznetsov AV. Total 132 aircraft.

A hypothetical probable defensive operation of the Russian Navy can be carried out in the event of an offensive VNO by NATO countries (USA). The basis of the attacking group in VNO will be aviation (coast-based and deck). The forces of the parties (the number of combat aircraft in the regular air force and navy, without reserves, the marine corps and the US National Guard): a) NATO aircraft: US Air Force - 2157, NATO Air Force without US - 2265, on aircraft carriers (without backup AV) - 770 -840; b) Russian Air Force - 1301 combat aircraft (without naval combat aircraft - several dozen combat aircraft). Total: NATO has 5192-5262 combat aircraft, the Russian Federation - 1301. Superiority more than 4 times. The multiple advantage of the United States in sea-based and air-based cruise missiles further increases this figure.

One of the tasks of the Air Force and Navy in the VNO is the destruction (disabling) of aircraft carriers - the basis of the US Navy's general-purpose forces. Possible means capable of fighting AB: 1. Aircraft carriers. 2. Surface ships (NK). 3 Aviation Air Force. 4. Submarines (PL). 5. Mines.

1. A probable enemy may have from 10-11 to 20-heavy AB (with the commissioning of the reserve and taking into account the AB of France and the UK). In conditions of significant (at times) superiority in aircraft carriers, naval aviation and NATO air forces, our AVs (military conflict in the coming decades): a) will take an unequal battle on the high seas and will be destroyed or b) must maneuver near their coast under the guise of coastal aviation home base. Moreover, this also does not guarantee their survival - the defeat of the many-fold superior forces pressed to the shore of the AB is a matter of time. In such circumstances, aircraft carriers are practically deprived of their main purpose - the ability to transfer force. Therefore, the rejection of expensive aircraft carriers in favor of coast-based aviation is an economically viable step. As aviation's potential superiority decreases over Russian aviation, the probability of hitting aircraft carriers will decrease. Consequently, the use of aircraft carriers in the defensive VNO is advisable when our loss in the aviation forces (Air Force and Navy) will not be as significant as at present.

2. Fighting on the territory of the Russian Federation can be conducted at several theaters of operations (theater of operations). And to achieve success, strategic mobility of forces Fleet. Surface ships have significant limitations in strategic movements, for example, from one sea to another: a) on inland waterways - insufficient depth of shallow channels and dimensions of lock chambers; b) problems with year-round movement along the Northern Sea Route (NSR); c) possible actions of the probable enemy in the straits (remember the Tsushima tragedy when moving the Russian squadron from the Baltic to the Sea of ​​Japan): Tsushima, Laperuza, Bering, Bosphorus and others.

No matter how long-range anti-ship missiles had NK, they will always be amazed before with the same range missiles, but fired from aircraft that took off from aircraft carriers. In other words, AVs practically will not allow NKs to launch their missiles. Therefore, NK is useless in the fight against AB. The strategic mobility of NK groups is low. Therefore, surface ships should not be used to directly destroy enemy aircraft carriers. Their number should be limited only by the need to have a balanced fleet.

3. Strategic and long-range aviation, having several bases in the west and east of the country, can act at any time in the interests of any navy fleet. Its strategic mobility is huge. Consequently, rocket-carrying aircraft capable of fighting aircraft carriers simultaneously in different theaters should be the main strike force of the Navy (Air Force). Serial production from 2025, the PACDA with hypersonic missiles (RMS) with a launch range of up to 1000 km (approximately) allows bombers to use weapons without entering the aircraft carrier's air defense zone. This further enhances the importance of missile-carrying aircraft in the destruction of aircraft carriers. To ensure the reconnaissance of targets, the following should be built: DRLO aircraft, spacecraft of the Liana system, over-the-horizon radar, etc.

4. Submarines, possessing great secrecy, can suddenly strike AB. However, the cost of submarines is high. Consequently, it is necessary, along with them, to have a sufficient number of cheap rocket (RCC) of air-independent submarines - VNPL and DPL, capable of hitting aircraft carriers.

Conclusions on the defensive operation:

1. The use of aircraft carriers in the defense VNO becomes appropriate when the loss of the Russian Federation to a potential enemy in the aviation forces (Air Force and Navy) will be insignificant. Under the conditions of the repeated superiority of the enemy, the probability of destroying the aircraft carriers of the Navy will be great.

2. The main strike force of the Navy (VS), capable of hitting enemy aircraft carriers, must be missile-carrying aircraft.

3. To combat aircraft carriers, it is necessary to have in the Navy, along with nuclear submarines, a significant number of rocket launchers (SPM).

4. Limit the construction of expensive large surface ships, unable to fight aircraft carriers. Their number should ensure the balance of the Fleet.

5. Funds saved on aircraft carriers and large surface ships should be channeled into the development of missile-carrying aircraft, submarines, and target reconnaissance assets.