April 21 2014
135
Composite north Italian armor. Place of production - Milan, approximately 1590 g. One of the latest creations of the master Pompeo della Chiesa (Pompeo della Chiesa). He worked as a master gunsmith from 1571 to 1591. The armor is not full - some details have not been preserved: parts of the elements on the right shoulder pad, a plate on the right thigh shield and, probably, thigh leggings. Translation from English, some inaccuracies are possible. All photos are high resolution, clickable. 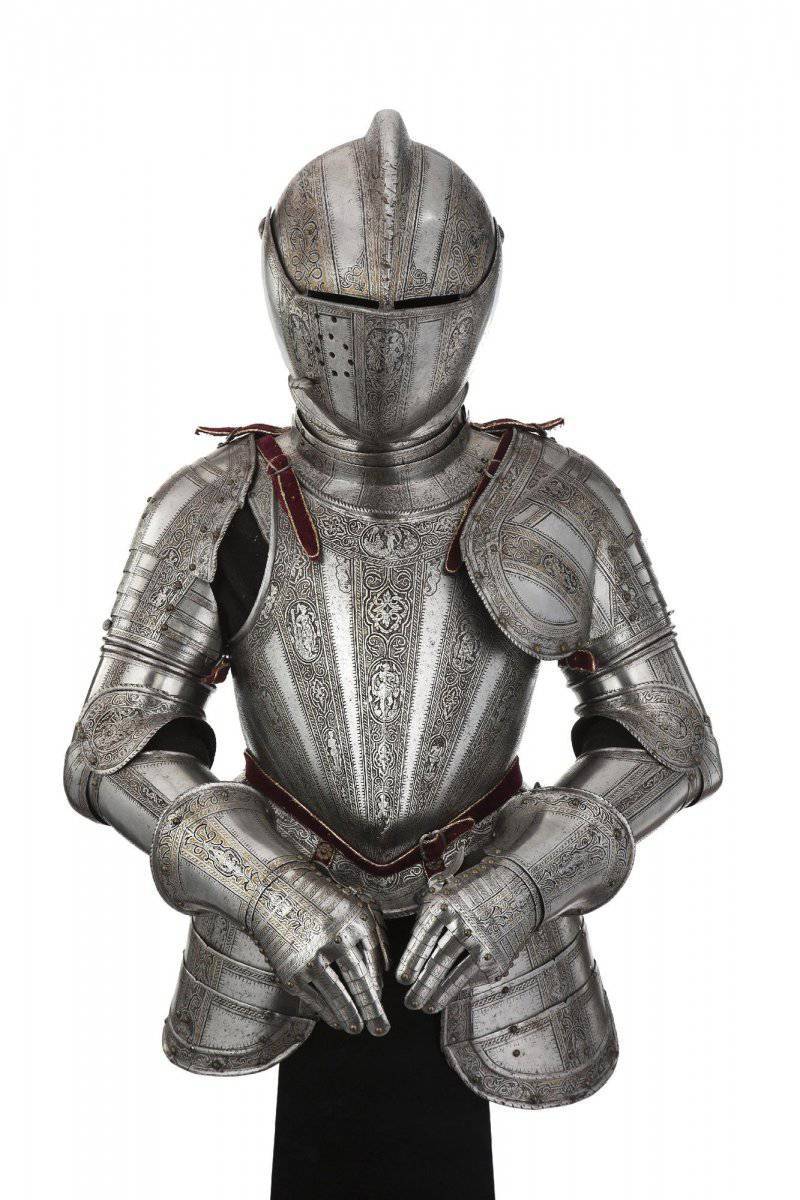 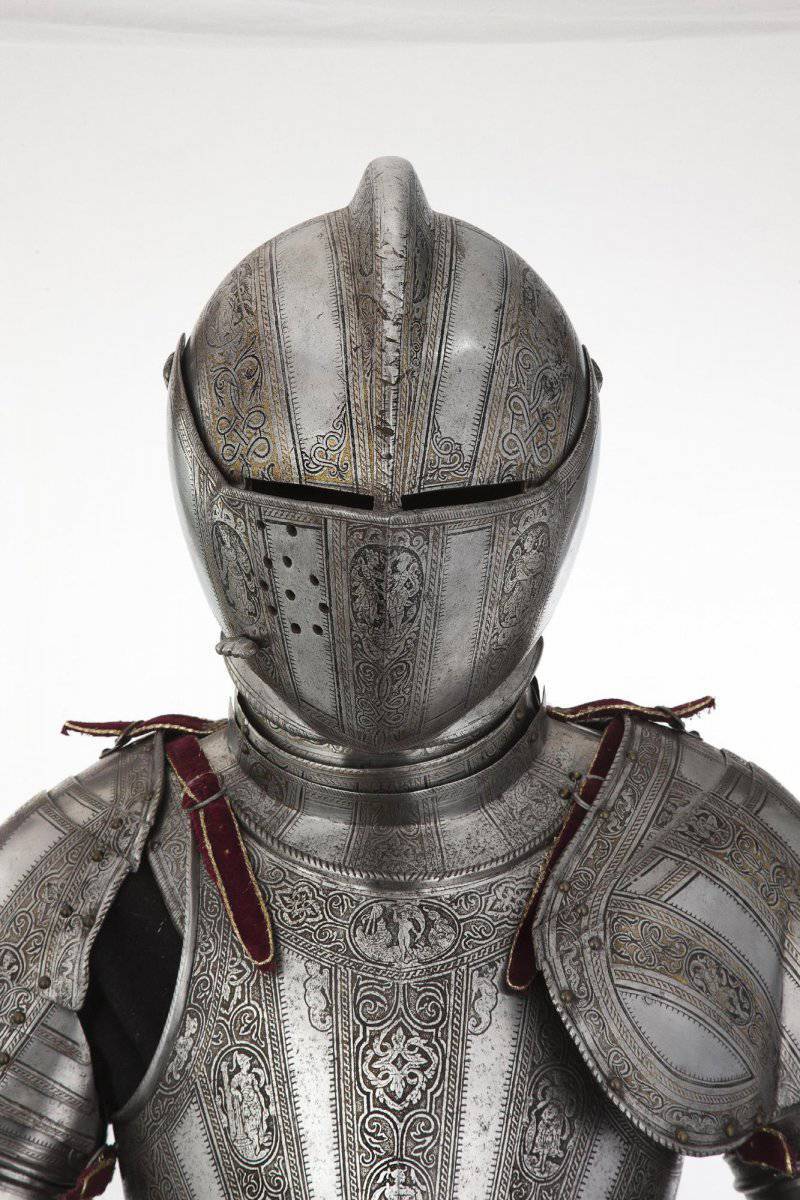 Tight-fitting heavy closed helmet with a pronounced forward bend. The helmet has a low ridge with traces left over from numerous chopping punches. There are traces of blows on other elements of the armor. In the front, front, part of the helmet is an observation slot (visor) with a central division. 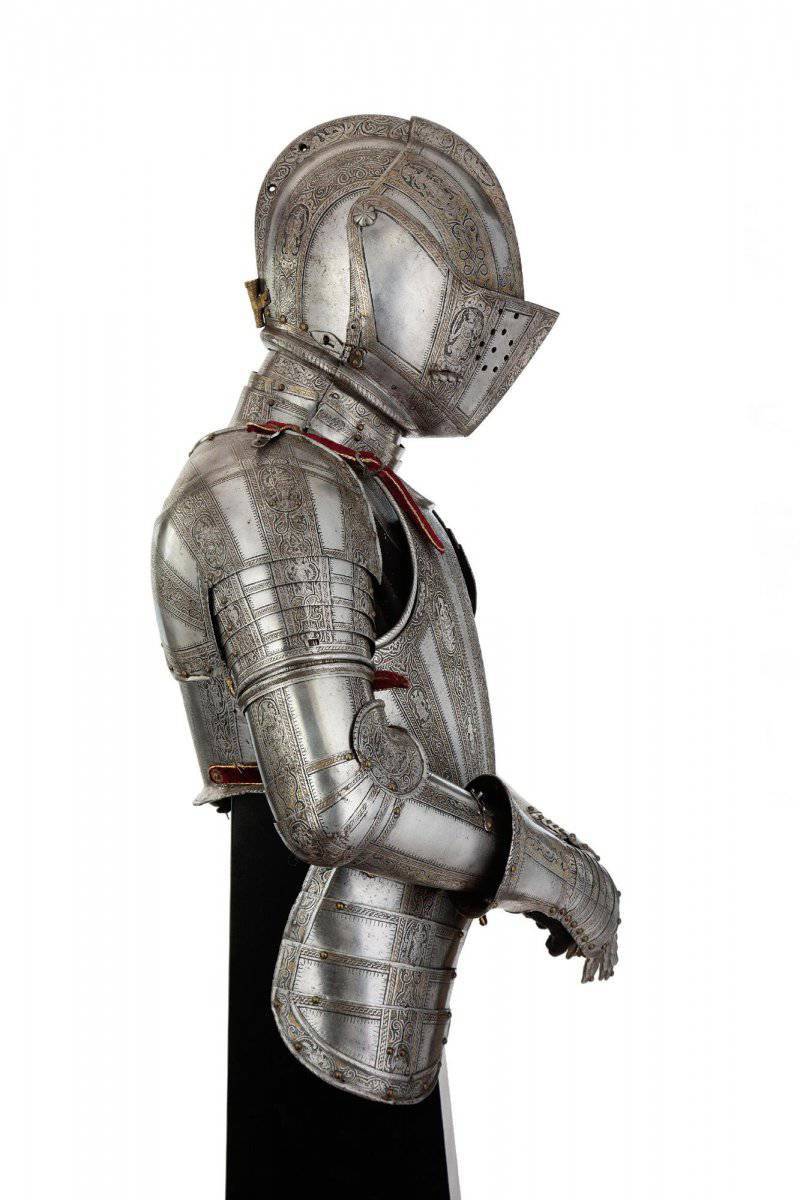 It should be noted that the term "closed helmet" is used only in our time. At the time of using the helmet it was called "arm". 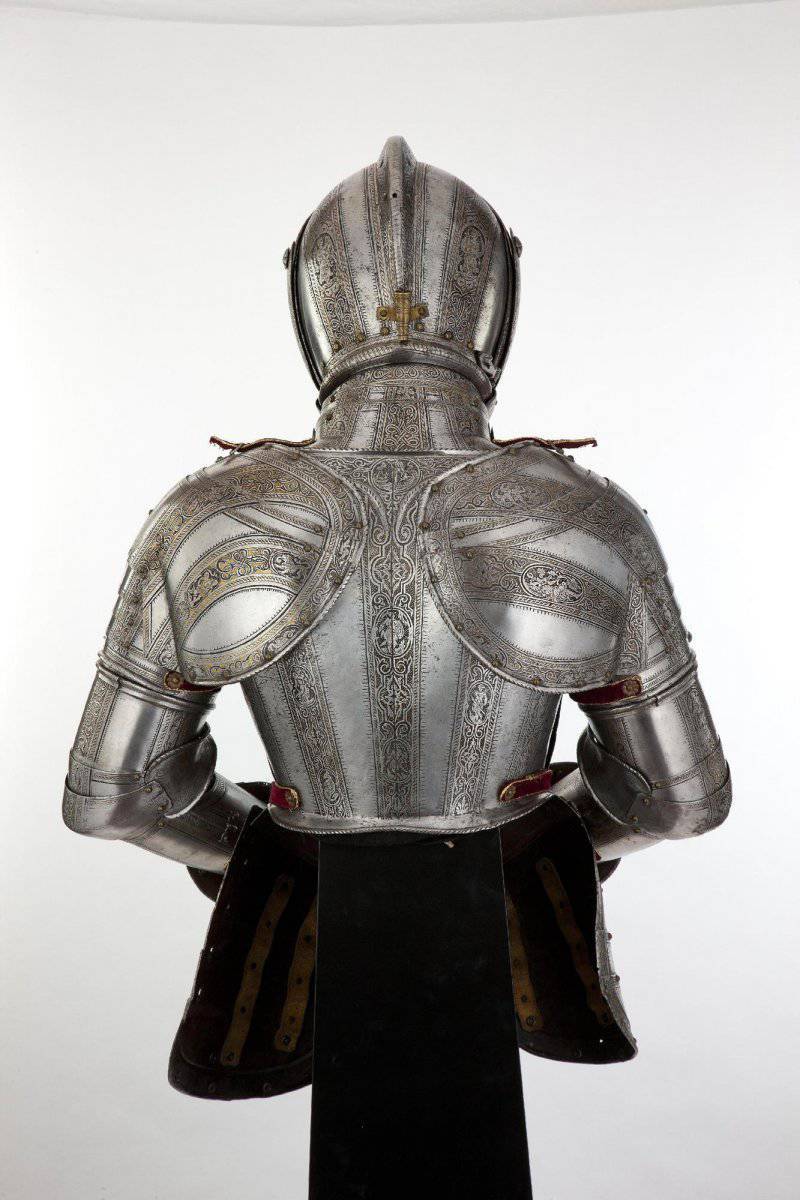 In the area of ​​the nape there is a traditional tubular plume (feather) holder made of brass. 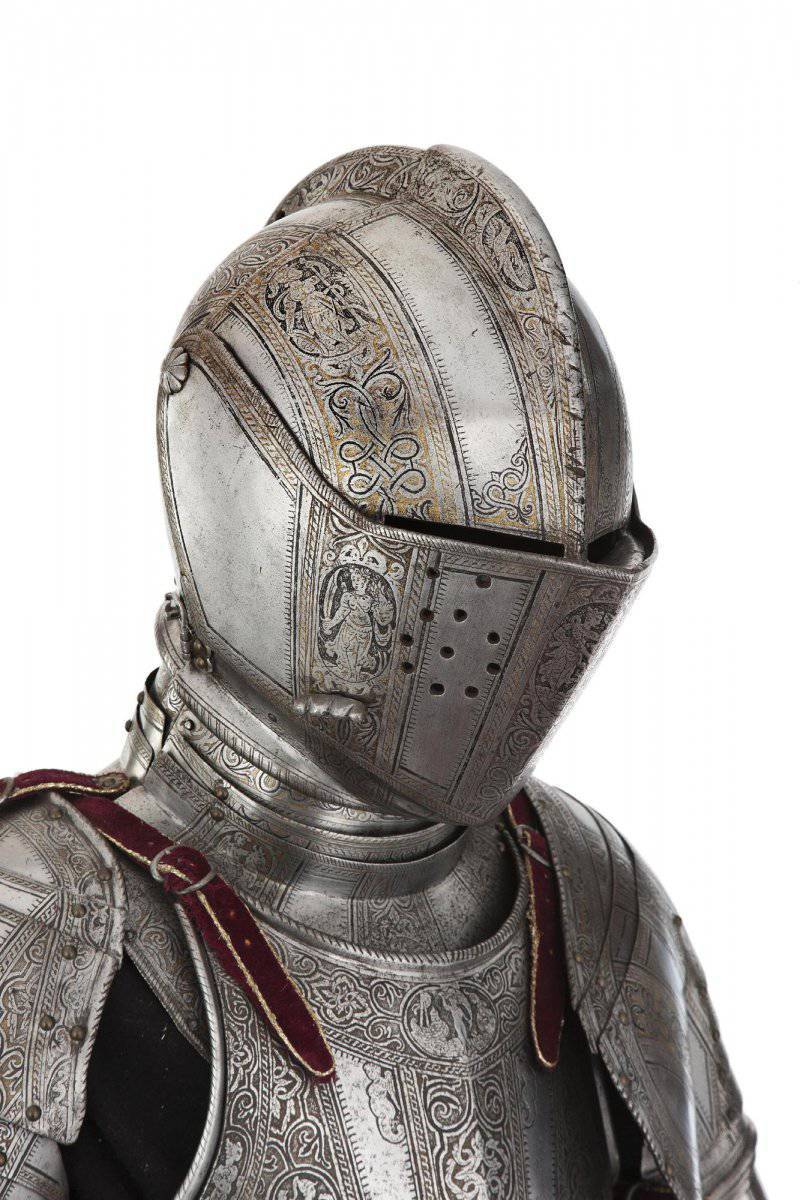 Along the bottom edge of the helmet, there is a convex groove, into which the protruding edge of the upper plate of the collar (boarder) with pairs of diagonal lines enters. Thus, the helmet is fixed on the armor, or rather, on the gorget. 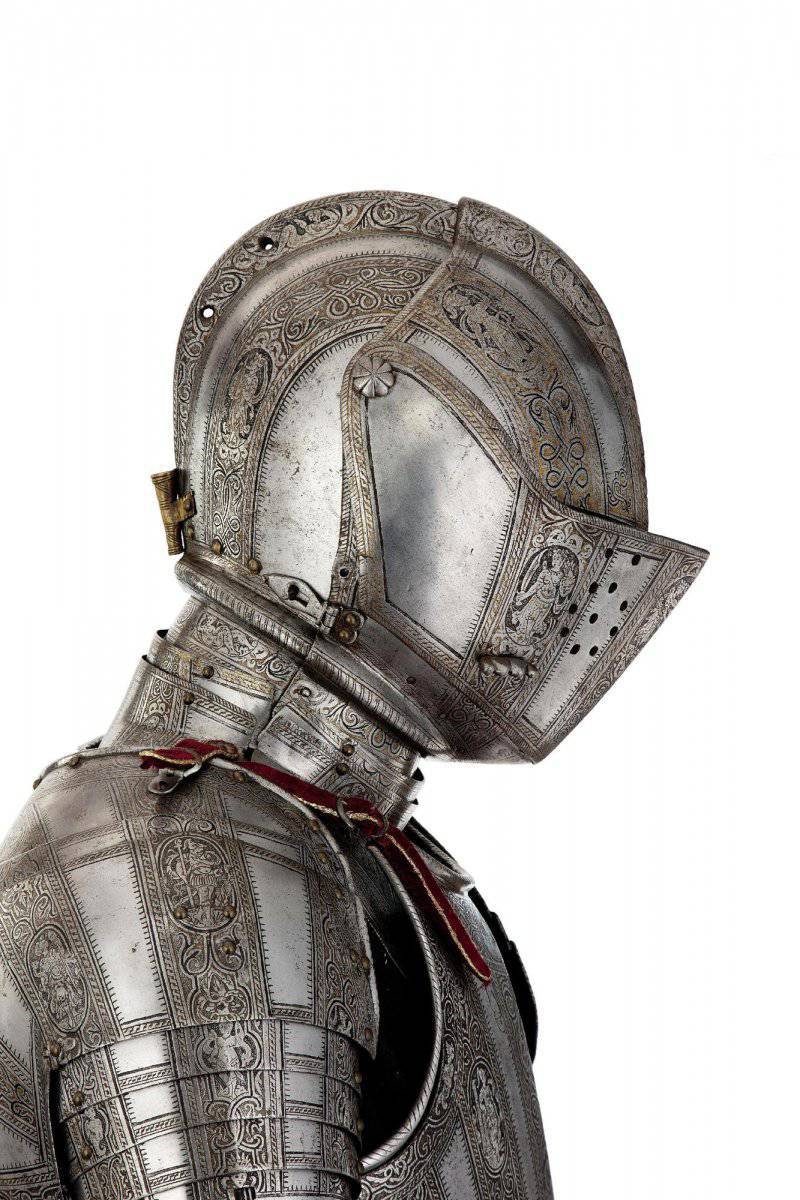 On the right side are small holes to improve ventilation inside the helmet. The visor is double, attached to the helmet on two wing nuts and a steel fastener on the right. 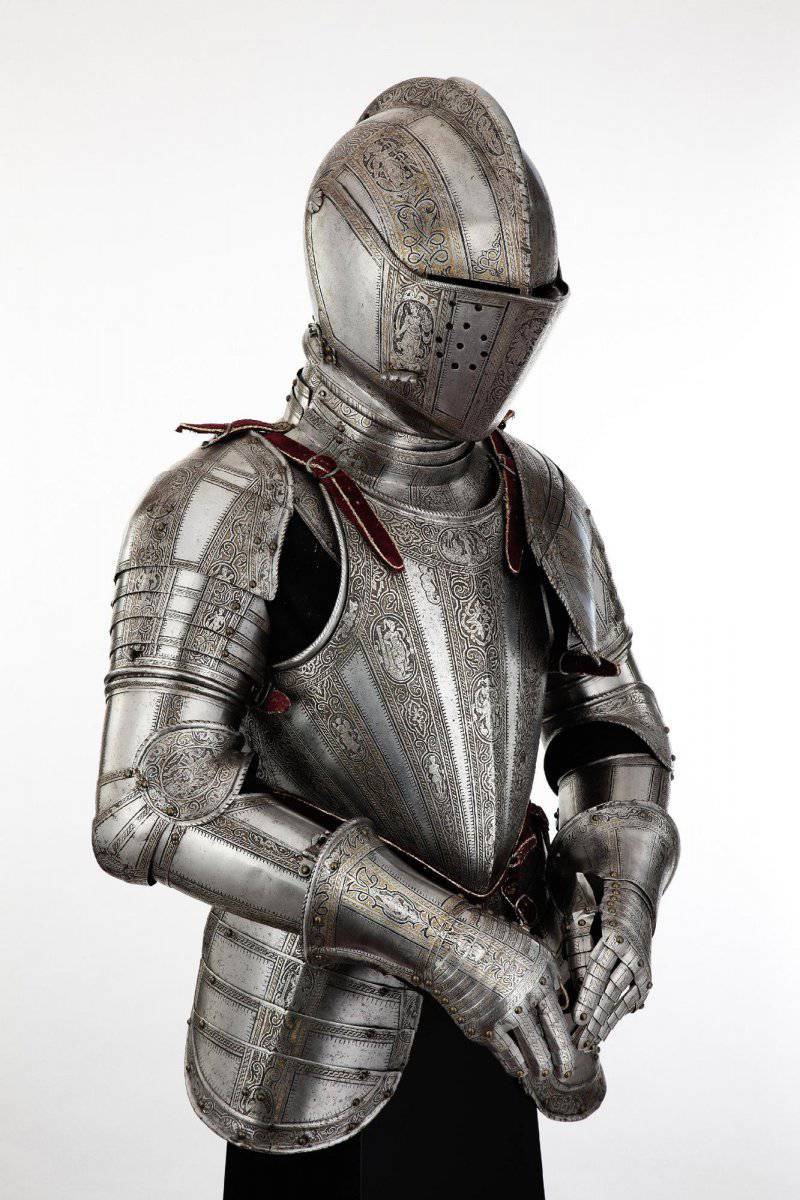 This mount allows the helmet to rotate freely to the right and left on the collar. There is no gap between the helmet and the collar, which gives a high degree of protection against weapons the adversary. This method of fastening the helmet - the most difficult to manufacture, but also the most perfect. For the possibility of tilting the head back and forth, the plate collar is made of articulated three plates, with some degree of freedom relative to each other. 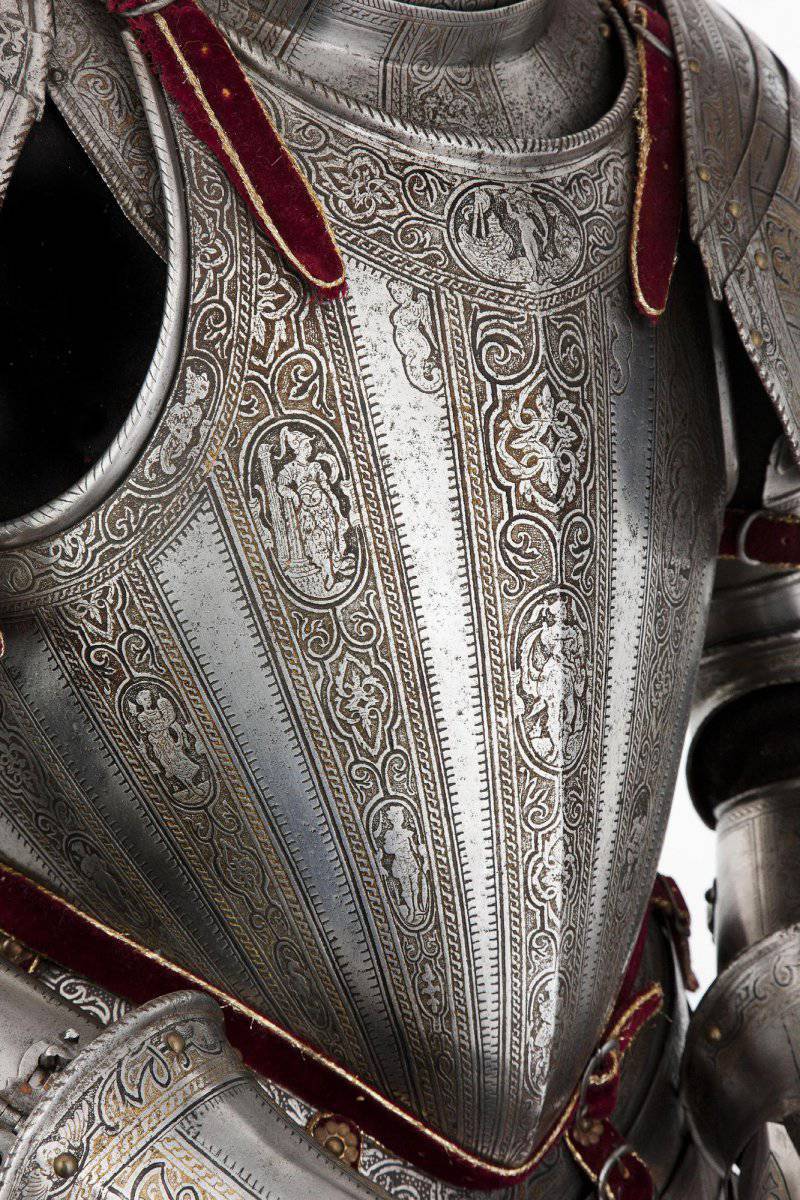 The cuirass includes a bib and a backrest, which are fixed on top with straps. Probably one of the owners of the armor was a knight of the Order of Malta - a Maltese cross was knocked out on the front inside of the cuirass. 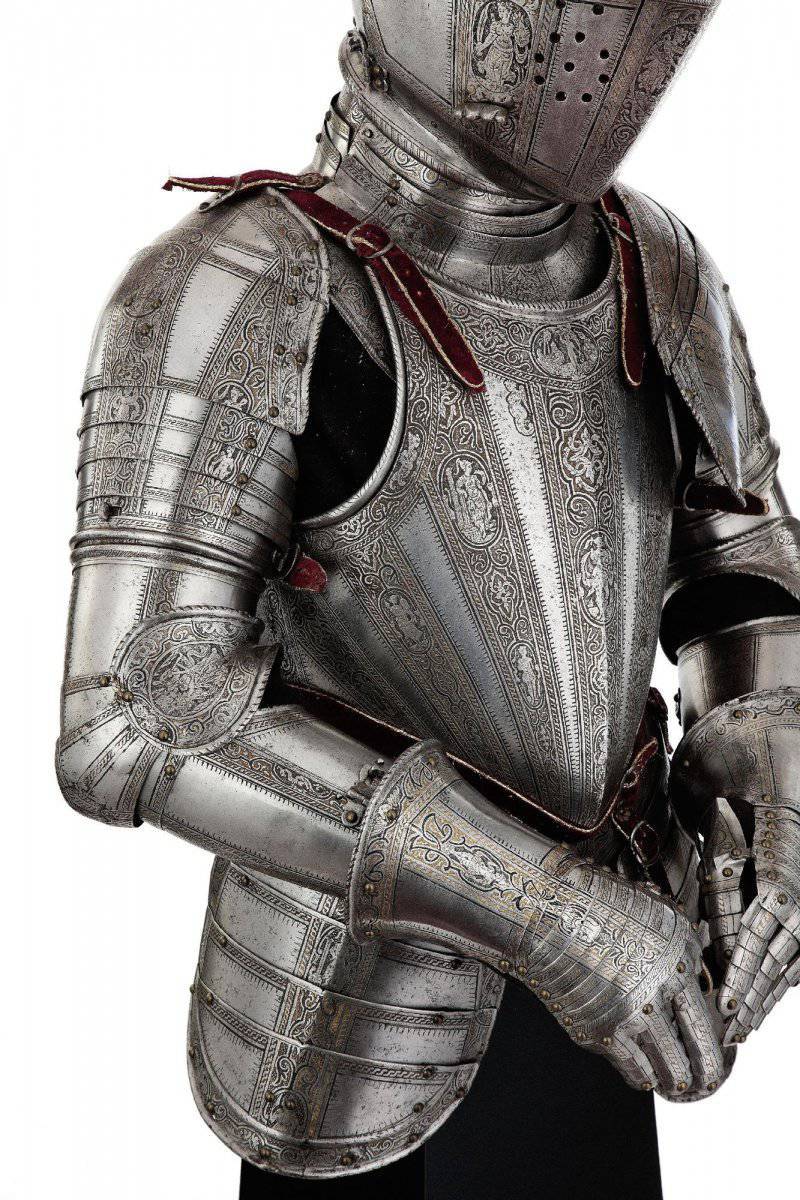 The breastplate ends with a small skirt of a single plate, made so that it is comfortable to sit in the saddle. To the skirt on four belts are fastened two thigh-shield plates (tassets), consisting of seven plates left and six plates - right. Because of this, the thigh plates look asymmetrical: the left one is noticeably lower than the right. One of the plates on the right panel is lost. 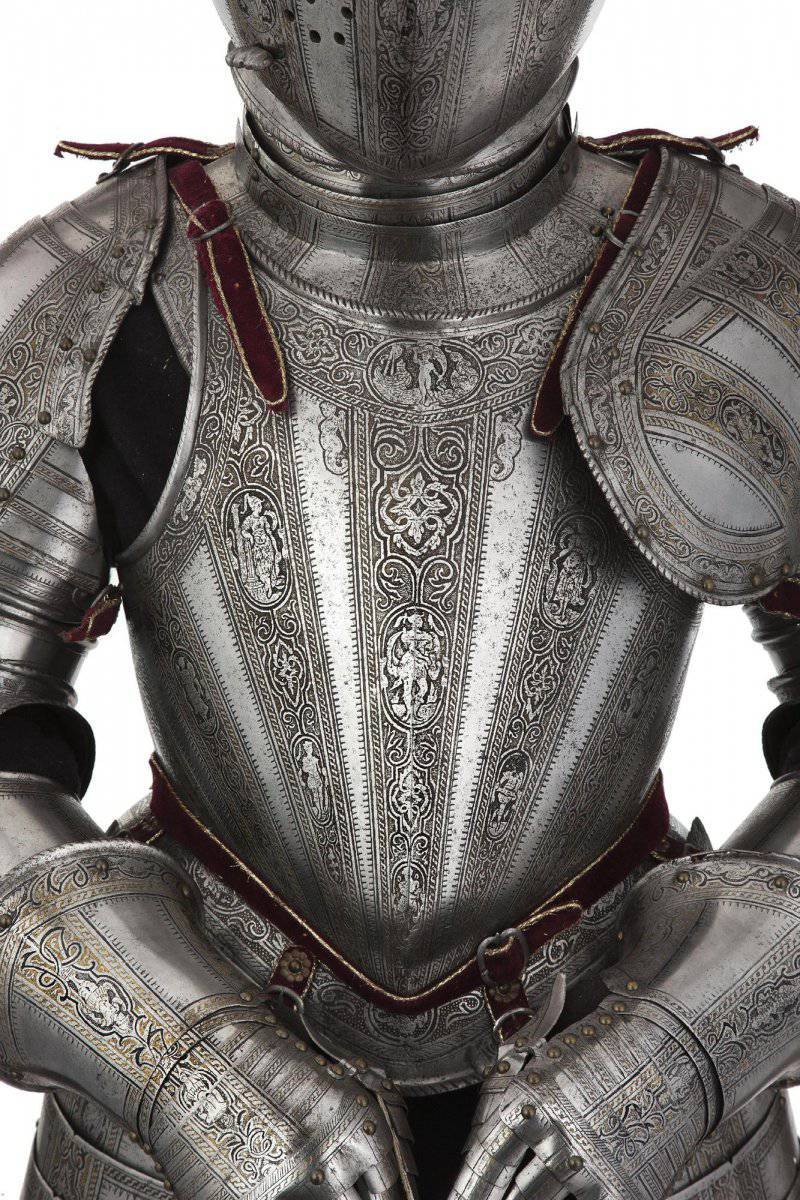 Shoulders also consist of seven plates each and also look asymmetrically, since part of the elements were damaged on the right, and in the subsequent of those parts that remained, it was re-formed. Fastened to the top of the plate collar straps. 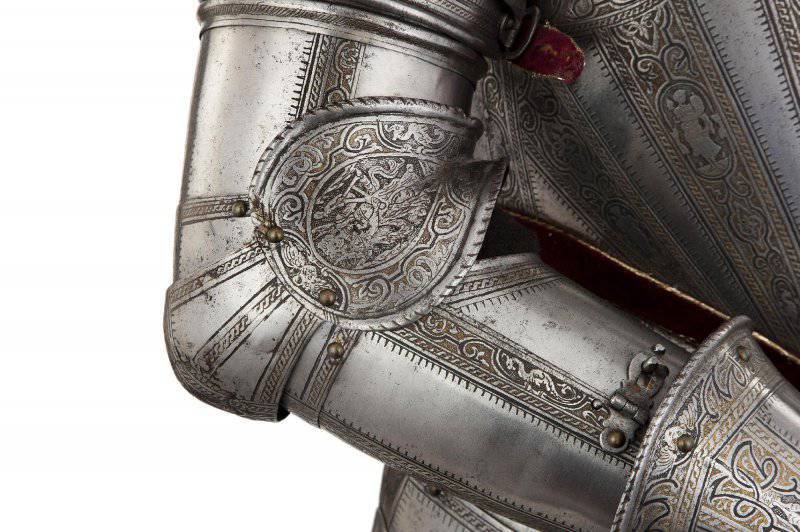 Bracers completely cover the wrists, attached to the shoulder pads in the region of the biceps with a belt. In the elbow joint, mobile elbow pads are used from three plates at the back and a heart-shaped coater in the front. This design allows relatively free to move your hands, and at the same time provides maximum protection. 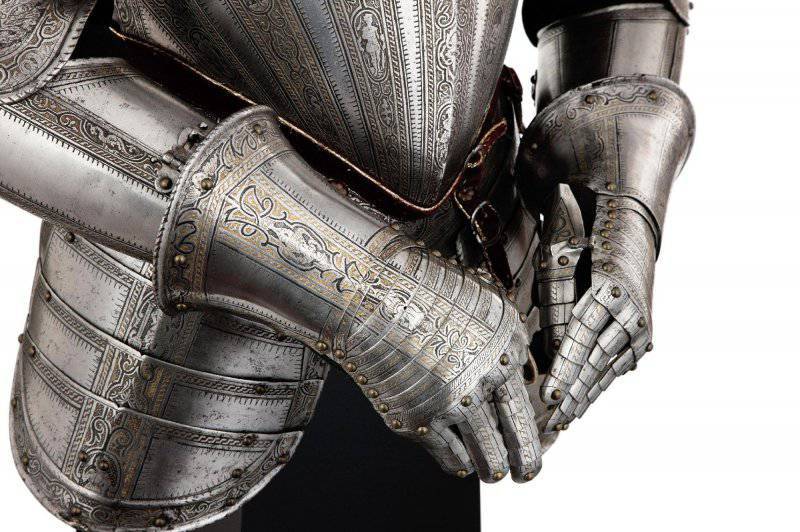 Multiple finger-type plate gloves with bell-shaped cuffs are made using a large number of plates and rivets, which does not hinder movement and at the same time perfectly protects.

It should be noted the magnificent engraving of this armor, made using gilding. The engraving is made very elegantly, without kitsch.