Why do the Japanese hate in neighboring Asian countries 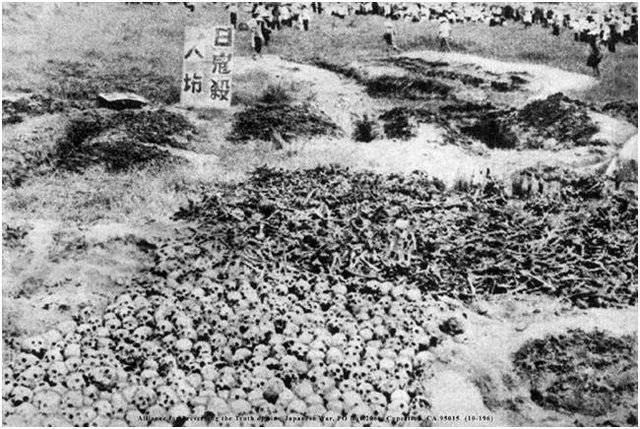 During World War II, it was common for Japanese soldiers and officers to chop civilians with swords, pin down with bayonets, rape and kill women, and kill children, old people. That is why, for the Koreans and the Chinese, the Japanese are hostile people, murderers.

In July, 1937, the Japanese attacked China, the Japanese-Chinese war began, which lasted until the 1945 year. In November-December 1937, the Japanese army launched an attack on Nanjing. December 13 Japanese captured the city, 5 days was a massacre (the killings continued and later, but not so massive), which entered into historyas the "Nanking Massacre." In the course of the massacre, which was staged by the Japanese, more than 350 thousand people were slaughtered, some sources cite a figure of half a million people. Tens of thousands of women were raped, many of them killed. The Japanese army acted on the basis of the 3's “clean” principles: “burn out clean”, “kill everyone clean”, “steal clean”.

The slaughter began with the fact that the Japanese soldiers withdrew thousands of Chinese of military age from the city of 20 and killed everyone with bayonets so that they could never join the Chinese army. The peculiarity of the massacres and harassment was that the Japanese did not shoot - they protected the ammunition, killed everyone and crippled them. weapons. After that, the massacres began in the city, women, girls, old women were raped, then killed. They cut hearts out of living people, cut their bellies, pierced their eyes, buried them alive, cut off their heads, killed even babies, and madness was happening on the streets. Women were raped right in the middle of the streets - the Japanese were intoxicated by impunity and forced fathers to rape daughters, mother sons, samurai competed, who would kill a man more with a sword - a certain samurai Mukai who killed an 106 man won.

After the war, the crimes of the Japanese military were condemned by the world community, but since Tokyo has denied them since the 1970-ies, Japanese history textbooks write about the massacre that many people were simply killed in the city, without details. 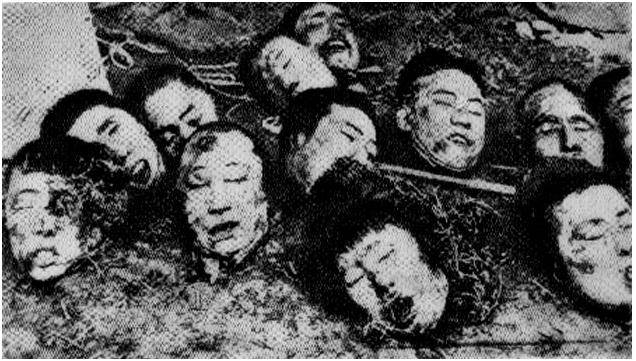 15 February 1942, the Japanese army captured the English colony of Singapore. The Japanese decided to identify and destroy “anti-Japanese elements” in the Chinese community. During Operation Purge, the Japanese checked all male-men of draft age, including Chinese men who participated in the war with Japan, Chinese officials serving the British administration, Chinese people who donated money to help China, Chinese, Chinese-born, and so on. From the filtration camps they were taken out and shot. Then the operation was extended to the whole peninsula, they decided not to "stand on ceremony" there, and, due to the lack of people for the inquiry, they shot everyone in a row. Approximately 50 of thousands of Chinese were killed, who were still lucky, the Japanese did not complete Operation Purge, they had to deploy troops to other sectors - they planned to destroy the entire Chinese population of Singapore and the peninsula. 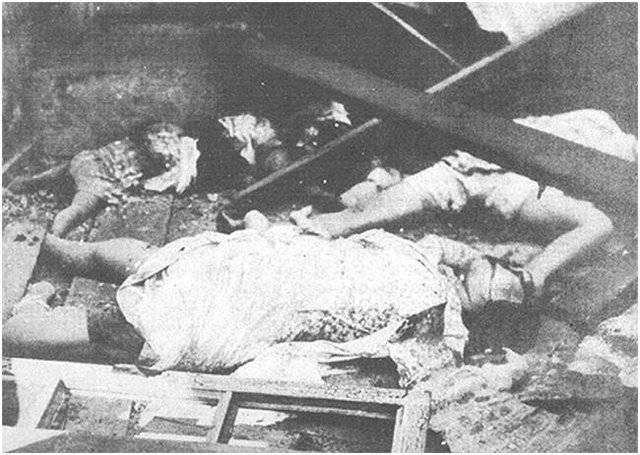 When in early February 1945 of the year it became clear to the Japanese command that Manila could not be held, the army headquarters was transferred to the city of Baguio, and Manila was decided to be destroyed. Population destroy. In the capital of the Philippines, according to the most modest estimates, more than 110 thousand people were killed. Thousands of people were shot, many were poured with gasoline and set on fire, the city’s infrastructure, apartment buildings, schools, and hospitals were destroyed. On February 10, the Japanese massacred the Red Cross building, killed everyone, even the children, and the Spanish consulate was burned, along with the people.

The slaughter was going on in the suburbs, in the town of Kalamba, the entire population was destroyed - 5 thousand people. They did not spare the monks and nuns of Catholic institutions, schools, and students were killed. 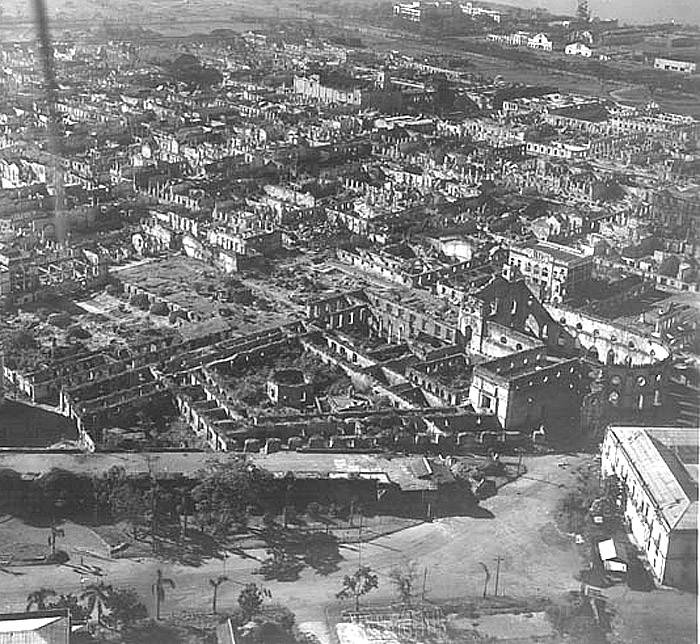 The system of "comfort stations"

In addition to the rape of tens, hundreds, thousands of women, the Japanese authorities are guilty of another crime against humanity - the creation of a network of brothels for soldiers. The usual practice was to rape women in the occupied villages, some women were taken with them, few of them were able to return.

In 1932, the Japanese command decided to create “comfortable home-stations”, justifying their creation by a decision to reduce anti-Japanese sentiment due to mass rape on Chinese soil, concern for the health of soldiers who need to “rest” and not get sick with venereal diseases. At first they were created in Manchuria, in China, then in all the occupied territories - in the Philippines, Borneo, Burma, Korea, Malaysia, Indonesia, Vietnam, and so on. In total, these brothels passed from 50 to 300 thousand women, and most of them were minors. Until the end of the war, no more than a quarter survived, morally and physically disfigured, poisoned by antibiotics. The Japanese authorities even created the proportions of “service”: 29 (“customers”): 1, then raised to 40: 1 per day.

Currently, the Japanese authorities deny these data, earlier Japanese historians spoke about the private nature and voluntariness of prostitution. 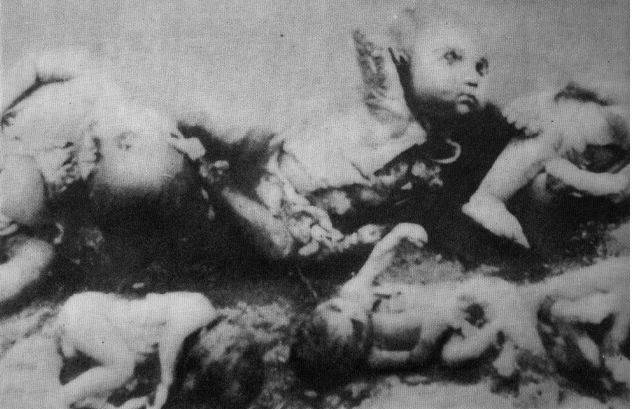 In 1935, the so-called Japanese Kwantung Army was established. "731 squad", its goal was the development of biological weapons, delivery systems, human tests. He worked until the end of the war, the Japanese military did not have time to use biological weapons against the United States, and the USSR only because of the rapid onset of the Soviet troops in August 1945.

“Experimental mice” of Japanese specialists became more than 5 thousand prisoners and local residents, they called them “logs”. People were slaughtered alive for "scientific purposes", infected with the most terrible diseases, then "opened" while still alive. They carried out experiments on the survivability of "logs" - how long they would last without water and food, scalded with boiling water, after irradiation with an X-ray machine, withstand electrical discharges, without any cut-out organ, and more. another.

The Japanese command was ready to use biological weapons in the territory of Japan against the American landing, sacrificing civilians - the army and the leadership had to be evacuated to Manchuria, to the "alternate airfield" of Japan.

Asian nations have not yet forgiven Tokyo, especially in the light of the fact that in recent decades Japan has refused to admit more and more of its war crimes. Koreans remember that they were even forbidden to speak their native language, they ordered to change their native names to Japanese ones (“assimilation” policy) - approximately 80% of Koreans adopted Japanese names. Girls were hijacked in brothels; in 1939, 5 million people were forcibly mobilized into the industry. Korean cultural monuments were stolen or destroyed.

Ctrl Enter
Noticed oshЫbku Highlight text and press. Ctrl + Enter
We are
The groans of thousands killed. How the "bloody prince" escaped punishment for the Nanking massacreAccording to the ogre code
Military Reviewin Yandex News
Military Reviewin Google News
277 comments
Information
Dear reader, to leave comments on the publication, you must sign in.