America is the god of war, or the reasons for the popularity of radical Islam in the Middle Eastern countries

April 29 2011
0
Those events in the North African countries, which we witnessed at the beginning of this year, actually have their root cause of the action or inaction of the leaders of the countries of the Middle East, Europe, Africa and North America. It is no secret to anyone that all the important issues of globalization and international relations of the strongest capitalist powers find their solution precisely in cooperation with the third world countries. 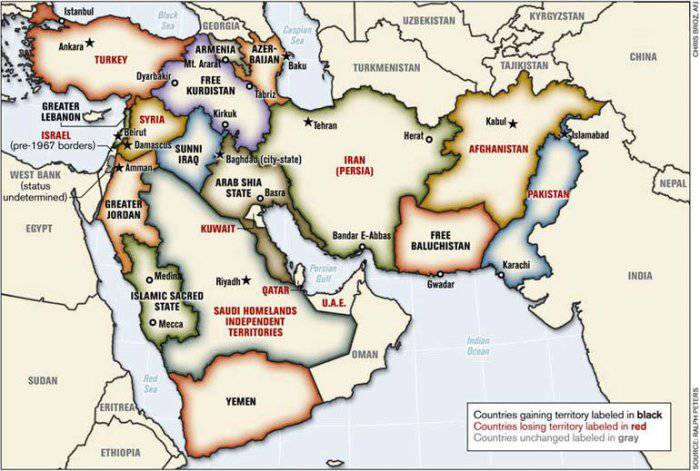 Such interaction can take various forms, but it seems that the most popular is war. Moreover, the war is in its purest form, not a backstage diplomatic, when all questions were resolved in simple words.

All military-political conflicts in the Middle East, however, like all other wars, have their own reasons. The interest of the USA and European countries in the raw material markets in the East is the main factor determining their strategy and tactics in the struggle for black gold and gas.

The US desire to “gently” enter the region and impose its own order in it resulted in a rather vague reform program called the “Greater Middle East”, which included a wide list of reforms in the territories of Middle Eastern states, as well as North African countries. In exchange, these countries could use the help of international financial institutions on favorable terms to carry out the same reforms. As always, Americans are worried about the infringement of the rights and freedoms of citizens of foreign countries and are striving in every way to share their experience in establishing a democratic order throughout the world. In fact, the “Greater Middle East” program is a restructuring plan for Arab countries, developed by political scientists and technologists in Washington, aimed at strengthening its control over the resources of the countries of this region.

Official Cairo, through the influential newspaper Al-Ahram, said that the US initiative "does not contain anything new or original, and in fact only states the need for political, economic, social and democratic reforms." For the most part, the American proposals did not inspire the Arab leaders, but, on the contrary, strained relations with those with whom it was not possible to establish contacts for a long time. The Iranian President regarded the "Greater Middle East" program as an offensive by the West against Islamic traditions, and many Arab political scientists described such a proposal as support for Israel in establishing "hegemony over the entire Muslim world", and also predicted the failure of all American reforms due to local ideological, historical and geopolitical factors.
The Israeli-Palestinian conflict is a stumbling block, because America is trying in every way to support Israel, which sets many Arabs and Muslims against themselves. In response to all the justifications of the American government and assurances of non-interference in the internal life of the Arab states, the leaders of the Middle Eastern countries nevertheless showed the US their suspicions about the true plans of the “reformers”.

The desire to change the structure of the region in order to prevent the penetration of radical Islamism into the West with the help of "violent" reforms is perceived as an insult, because with this interpretation the entire Muslim world is perceived as a potential threat.

Apparently, such a questioning pushed many radical Islamic movements to unite against the United States and made their ideas popular not only within their own countries, but also outside. Proof of this can be the presence of Islamist movements in countries where the Americans have already deployed their military bases (Kyrgyzstan, for example), in countries that are potential raw materials sources such as Libya, Iran, as well as in intermediate countries that act as a buffer between East and West. (Tunisia, Egypt, Turkey).
In many ways, the unwillingness to meet the initiatives provoked the United States to numerous attempts to find a pretext for unleashing action in the Middle East region and, nevertheless, to change the alignment of forces. Terrorism charges and nuclear development weapons Iran has influenced public opinion, splitting it into two parts. The first, Europe and the United States, actively advocate the eradication of terrorism in any form, implying extreme Islamism. The second part - the Muslim countries - were able to unite under their wing an increasing number of fans of the fight against American colonialism. Understanding that the next war will negatively affect the image of the United States, official Washington chose to support loyal and pro-government Islamic parties not only in Middle Eastern countries, but also in Indonesia and Malaysia, thereby showing its friendliness towards Islam as such. But at the same time, funding anti-government movements and parties in countries of interest to the United States, Americans are trying to undermine the Muslim tradition from the inside. But so far, the curve of failures and victories of American policy in this area looks more like a zigzag than an ascending line.

According to experts, the inability of official Washington to influence the resolution of the Arab-Israeli conflict only aggravates the US position in this region, which was repeatedly the reason for holding anti-American actions in the region, as well as in European countries, where there is an increase in the popularity of Islamic ideas.

Recent events in North Africa have shown the strength and power of Islamic ideas, against which the US was able to respond only by force of arms.

It should also be noted that the representation of the United States as a god of war worries the Americans themselves. Many high-ranking officials express a negative attitude regarding the active participation of America in military conflicts in foreign territories. However, the current president made it clear that war is the only way to maintain that set of values ​​accepted for ordinary Americans, as well as the only chance to lead the country out of the growing debt trap.