April 21 2014
24
Concern "Radioelectronic Technologies" (KRET) published information about its activities in 2013 year. As part of the state defense order, this enterprise, which is part of the state corporation Rostec, builds and transfers to the armed forces various radio-electronic systems. Thus, in 2013, KRET transferred to the customer new means of electronic intelligence and electronic warfare (EW). In a press release of the concern, it is noted that in 2013, the Russian Ministry of Defense adopted seven new complexes developed by KRET.


Last year, the armed forces received the first Moscow-1 electronic warfare systems. The equipment of this complex allows the detection of various enemy vehicles, as well as providing data to other EW facilities. Complex "Moscow-1" is able to find targets by the so-called. passive radar: its systems receive and process radio signals supplied by targets, primarily airborne. This allows you to monitor the airspace without unmasking your position with your own signals. After the target is detected, the equipment of the complex can accompany it and issue target designation to units of the Air Force, Air Defense Force or EW. 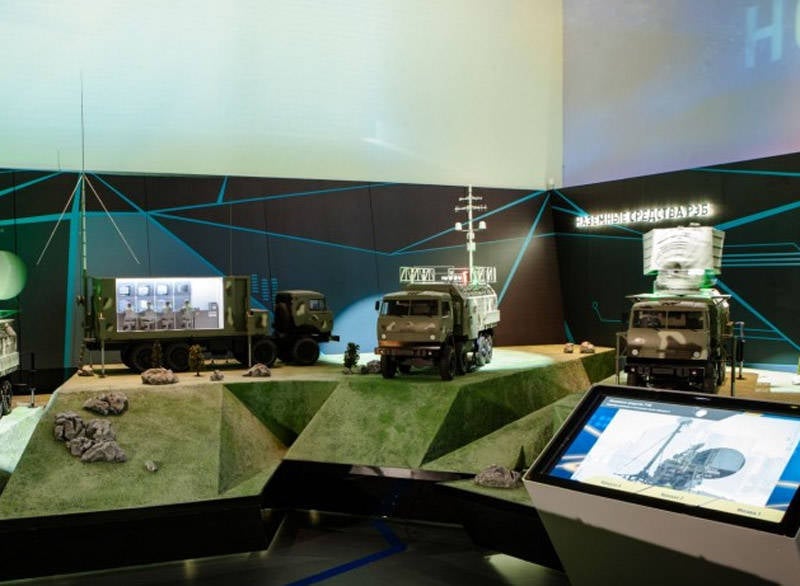 Presumably models of all three machines of the DER and EW "Moscow-1" complex in the KRET showroom, published on 15.04.2013 (http://saidpvo.livejournal.com) 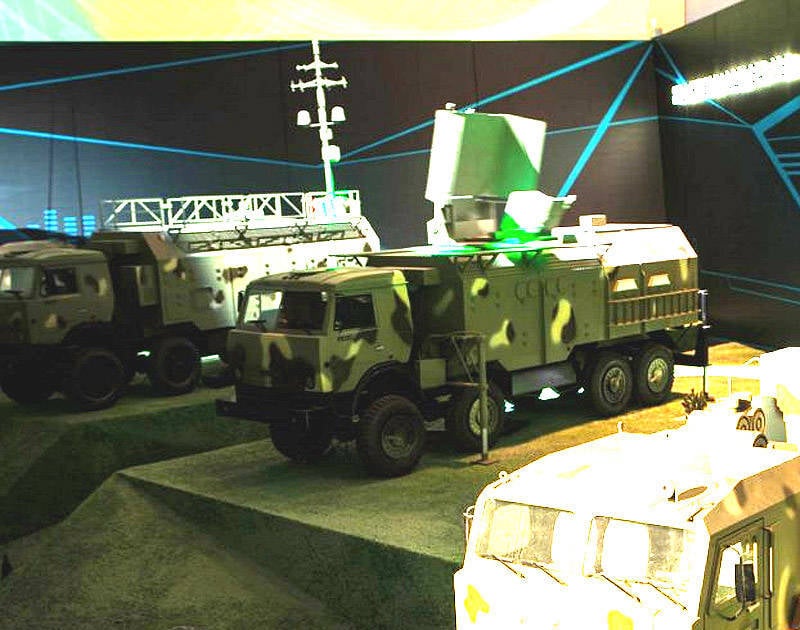 Presumably, the machines of the DER and EW "Moscow-1" complex in the KRET showroom, published on 15.04.2013 (http://saidpvo.livejournal.com) 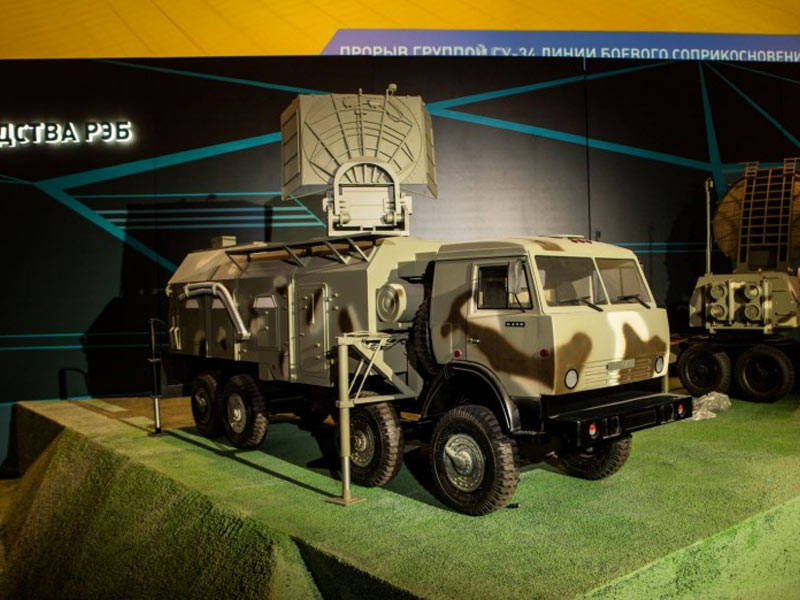 Presumably one of the machines of the DER and EW complex "Moscow-1" in the KRET showroom, published on 15.04.2013 (http://saidpvo.livejournal.com)

The Moscow-1 complex was developed by the Gradient Scientific-Research Institute, which is part of the Radio Electronic Technologies concern. The development of a promising EW system started back in the first half of the nineties, but for a number of reasons it took a lot of time. The contract for the supply of complexes "Moscow-1" was signed in April last year. In accordance with this document, until July 2015, KRET should deliver nine sets of the system to the customer. The announcement of the transfer of the first complex appeared in early December 2013 of the year. At the same time, it was reported that a new contract was signed for the supply of another ten Moscow-1 systems before the 2016 year.

During the 2013 year, the Bryansk Electromechanical Plant, which is a structural subdivision of KRET, transferred to the armed forces 10 EW complexes “Krasukha-4”. The complex "Krasukha-4" was developed by the Gradient Scientific-Research Institute and is intended for setting active interference. The capabilities of this system make it possible to effectively counteract the work of the radars of various aircraft, including airborne early warning and control aircraft. Delivery of EW systems "Krasukha-4" began in the first months of last year. By now, according to KRET, the military has received 10 of such systems. 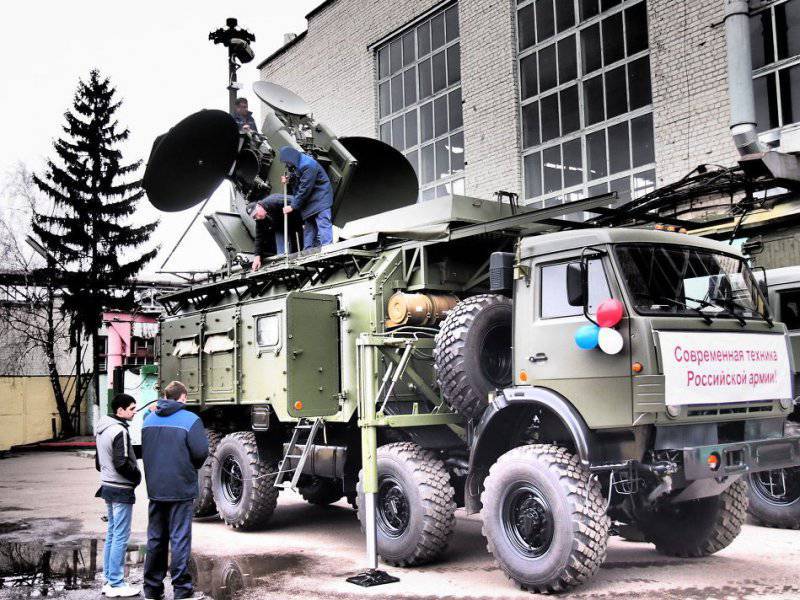 In November, 2013 of the year KRET fulfilled the state order for the supply of SPR-2М “Mercury-BM” complexes. This self-propelled machine is a further development of the Mercury-B system and is intended to protect the troops from weaponsusing radio shakers. The principle of operation of the system "Mercury-BM" is relatively simple: the complex's electronics emit signals that affect the operation of the radio bombers of enemy ammunition. Due to this impact, projectiles or missiles explode at a higher altitude, thereby reducing the risk of damage to personnel and equipment. In addition, the Mercury-BM complex can transfer the fuses to contact mode, which accordingly affects the effectiveness of an artillery or missile strike. 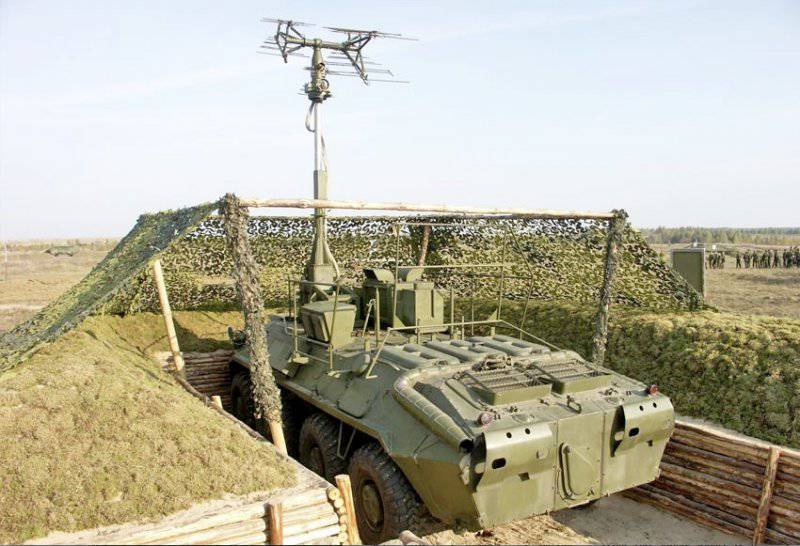 Last fall, the military received 10 complexes SPR-2M "Mercury-BM", ordered earlier. According to reports, this was the second contract for the supply of similar systems of electronic warfare. It was reported on the preparation for the signing of the third such contract. This time, the Ministry of Defense was ready to order 20 complexes of the new model.

Last year, the military received several new “President-S” complexes created by the Ekran research institute. This airborne defense complex is designed for installation on airplanes and helicopters of various types and is capable of protecting them from enemy weapons. Depending on the type of aircraft and the wishes of the customer, a set of several system components can be mounted on it. The “President-S” complex includes control equipment, radar or laser warning stations, a missile attack detection system, a device for ejecting expendables (false thermal targets, anti-radar cartridges or disposable cartridges with interference transmitters), an active jamming station, and also incoherent and laser opto-electronic suppression stations.

The onboard defense complex “President-S” is capable of detecting the work of enemy radar stations or laser systems, as well as detecting missile launches. After that, automatics can determine and use the most effective method of counteraction in this situation: radio interference, optical-electronic suppression, or special cartridges of several types.

The Kaluga Research Institute of Radio Engineering (KNIRTI) handed over to the military several active jamming stations SP-14 / SAP-518. These stations are used to protect the Su-27SM and Su-35S fighters, and are also part of the on-board equipment of the Su-34 front-line bomber. SP-14 / SAP-518 systems should be used to counter enemy radar stations, as aviationand ground.

Carrying out orders for the supply of various systems, enterprises from the “Radioelectronic Technologies” concern are engaged in the creation of new complexes for various purposes. For example, currently the Kaluga KNIRTI is developing an aviation complex of electronic warfare "Khibiny-U". In the future, this system should be part of the onboard equipment of front-line aviation aircraft. Thus, the Su-30CM fighter will be used as a platform for testing the new complex. It is alleged that the system "Khibiny-U" will have a great superiority over the existing aviation electronic warfare systems. Bryansk Electromechanical Plant is currently working on a project of a promising active jamming system, which in the future will replace the Krasukha-4 complex.

In the next five years, KRET should supply the Russian armed forces with new 20 types of various systems. These are already existing, and only developed complexes of different classes. In particular, it is planned to start manufacturing space-based systems and man-portable air defense systems. KRET products are in demand not only from the Russian Ministry of Defense, but also from foreign countries. 60 foreign countries in total acquire about a third of all products of the concern.