April 19 2014
174
The head of the Dnipropetrovsk regional state administration, the oligarch Igor Kolomoisky, claims that he paid the first promised reward - $ 10 thousand for the "caught saboteur", which was handed over to law enforcement agencies. About this Kolomoisky said on his page on the social network. 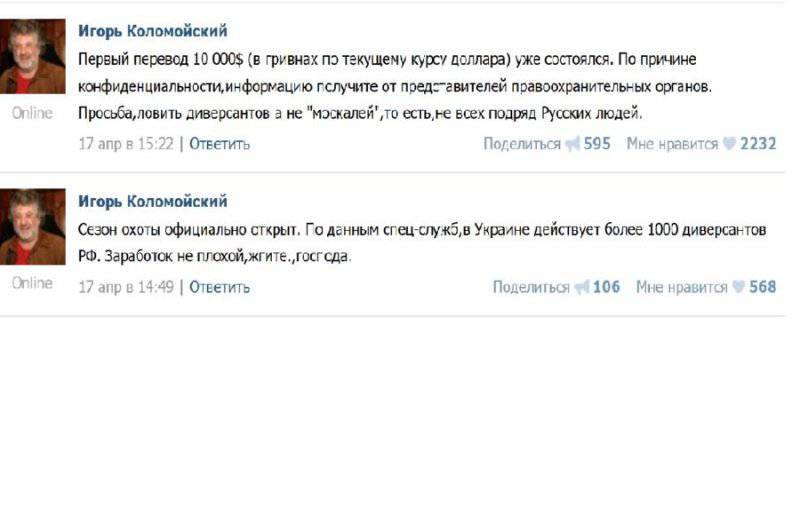 “The first transfer of $ 10 000 (in UAH at the current dollar rate) has already taken place. Due to confidentiality, you will receive information from law enforcement officials. Please catch saboteurs, not “Muscovites,” that is, not all Russian people in a row, ”Kolomoisky said on his page on the social network VKontakte.

Earlier, the oligarch promised this amount for every Russian “saboteur” caught.

“The hunting season is officially open. According to intelligence, in Ukraine there are more than 1000 saboteurs of the Russian Federation. Earnings are not bad, burn, gentlemen, ”- wrote the governor of the Dnipropetrovsk region.

Earlier, another Ukrainian oligarch governor also donated his money for “social purposes”. The head of the Donetsk region Sergey Taruta ordered to dig a moat on the border of the region with Russia. At the same time, Taruta assured that he had spent on this “own funds”.

Two oligarch governors were appointed to the posts by the new authorities of Ukraine shortly after the February coup d'état. Igor Kolomoisky - co-owner of the Privat group, head of the European Jewish Council. Sergey Taruta - Chairman of the Board of Directors of ISD Corporation.