The correspondent talked with Yermek Taychibekov, who offered an award for the governor of the Dnipropetrovsk region

The correspondent of Forbes.kz talked with Yermek Taychibekov, who offered an award for the governor of the Dnipropetrovsk region, the Ukrainian billionaire Igor Kolomoisky and the ex-prime minister of Ukraine Yulia Tymoshenko 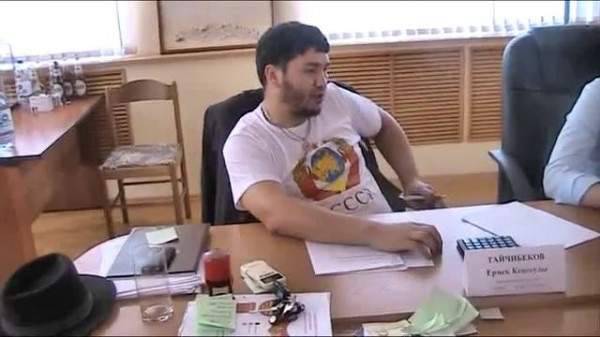 Methods of restoring order known Ukrainian oligarch Igor Kolomoisky, now the governor of the Dnipropetrovsk region, on the territory entrusted to him, the RuNet was agitated after on Thursday, 17 of April, his Deputy, businessman Boris Filatov posted on its page in the Facebook post, where, in particular, reported:

“We have a suggestion.

For each transferred "green man," he is a mercenary who has stepped onto our common land and is trying to push us into a fratricidal war - a reward 10 000 US Dollars.

For each vacated building, transferred to the local government and under the protection of the Donbas Special Forces of the Dnipro battalion - reward 200 000 US Dollars (moreover, the territorial community retains free access at any time) ”.

The answer to this challenge came from Kazakhstan. how reported Russian Spring online edition, Kazakhstan businessman Ermek Taychibekov suggested on my Facebook page 1 million rubles behind the head of Kolomoisky. “At the same time, a Kazakhstan businessman set a time limit for completing a task. “Hunting season”, as Taychibekov wrote, is open until 1 this May ”, - Said the note. By Friday morning, April 18, such a message on personal page Taychibekov in the social network was not. But on Thursday, Ermek Taychibekov offered a “reward in the form of frozen chicken” for Yulia Tymoshenko. Forbes.kz contacted the author of this message.

F: Ermek, the media report that you promised through Facebook 1 million rubles. behind the head of Igor Kolomoisky. But I do not see a message about this on your page. Did you delete it?

- This post was deleted, but not by me, but by the Facebook administration. And with the note that if I post it again, my account will simply be blocked. I connect this with the fact that I take the pro-Russian position: everyone who is somehow for Russia is “squeezed out” from Facebook. This is an American resource. The administration wrote to me: “Please, do not write anything about the Russian Empire, because there is no such state”. For example, “VKontakte” has no such problems, because it is a Russian resource.

F: That is, the offer is in force and you are ready to part with a million. By the way, why did you appoint the award in Russian currency?

- Yes that's right. But I do not want Kolomoisky actually liquidated. So I just want to draw attention to the fact that leader of the "Right Sector" Dmitry Yarosh arrived, conferred with Kolomoisky, and Filatov made such a statement. After all, this is a call for a civil war on the territory of Ukraine, people for this money will kill each other and bring almost scalps!

I just took a step back. Proposed 1 million rubles, because I am guided by the Russian audience. And I’m ready to personally deliver this amount, but during the day the amount has already increased to 6 million rubles. Literally an hour after the publication, one hostess of the jewelry salon called, said: “From me - 3 млн". A few hours later, an acquaintance from Chelyabinsk called, he was engaged in construction engineering, he said that 1 million rubles. Called the owner of a nightclub in the city of Ivanovo, promised more 100 thousand. And so typed 6 million rubles.

F: The million you promised is still a lot of money. I would like to know what business you are in.

- I am not going to be revealed, because I do not want to advertise the business in this way.

F: I studied your other publications on the social network, and I got the impression that you are in favor of more than a deep, let's say, integration of Kazakhstan with Russia.

- Yes it is. The last couple of years I have traveled to all cities of Kazakhstan, visited more than a hundred villages, talked with ordinary people and came to the conclusion that people, in principle, want to live in one big country. But this idea, of course, must be communicated. If I catch a man on the street and ask him in the forehead: “Do you want Kazakhstan to become part of Russia?”, He will most likely refuse. But after half an hour of communication, the person begins to realize that this is the right way.

Subconsciously 80% of ethnic Kazakhs want reunification with Russia, I'm not talking about other ethnic groups.

F: How do you see this union from a legal point of view?

- I am for the creation of the Eurasian Economic Union and in this regard I fully support the political beliefs of our president. But I think that, in addition to economic integration, one must go to the creation of a single state. And this should be done only through a referendum, as in the Crimea.

F: What is the meaning of such a union?

- You are welcome. Having traveled throughout Kazakhstan, I realized that the biggest problem of our land is lack of water, and in Russia there are only lakes 2 млнwater capital is excessive. To completely resolve the issue of irrigating agricultural land in the Republic of Kazakhstan today, it’s enough 0,15% discharge of the Ob River. And if you turn a few Siberian rivers and increase the flow of water, you can make a pearl of Kazakhstan, completely change the climate! In addition, it will allow building a whole network of river channels and developing river transport in Kazakhstan (and 5 times cheaper railway). It will be possible to carry goods from Iran, India, China to Astrakhan, then to the Black Sea. But this is a large-scale, very expensive project, and two separate states will not be able to carry it out.

F: Your ideas sound, to put it mildly, odiously. You are probably accused of wanting to be promoted this way.

- There is no PR here, I am guided solely by ideological, personal convictions, the desire that my people live better.

F: Your ideas go against the ideas of national patriters ...

- They are fighting for the electorate. Tomorrow, these politicians can equally well fight for the hearts of ultra-Islamists.

F: And who do you position yourself as a politician, businessman, public figure, just a citizen?

- Everything that you called is true.

F: So, as a politician, you can also change your opinion?

- You want to know if I populist? No, I have strong, concrete convictions that I hold to for the last 20 years and that the last 3-4 of the year began to express publicly.

F: How do you think your statements relate to the Criminal Code of the Republic of Kazakhstan? Law enforcement agencies do not accuse you of separatism or calls for a change in the constitutional order?

- The Criminal Code of the Republic of Kazakhstan has an article 170, but it provides for punishment for “appeals for the violent overthrow or change of the constitutional order or the violent violation of the unity of the territory of the Republic of Kazakhstan”. But I do not call for anything violent, but simply write that I want Kazakhstan to become part of Russia. Now, however, the new draft Criminal Code is being considered in Parliament, where imprisonment is expected for appeals to separatism.

F: Do you see only Kazakhstan in association with Russia?

- Of course not. In Transcaucasia, you can work well, agree Armenia, Georgia. Need Turkmenistan. Without Ukraine can not do without Belarus.

F: Vladimir Putin once said: "He who does not regret the collapse of the USSR, has no heart ..."

- "... And the one who wants to restore it as it is, has no mind!" - completed the quotation Ermek. - I, of course, completely agree with him. It is impossible to enter the same river twice. Any empire collapses, then gathers. But this time, of course, it will not be called the USSR. It will be a revival in other borders.

... Ermek Taychibekov said on his social network page that he was born in 1978, he considers himself an atheist and monarchist. If you believe the data from the Internet, Yermek in 2010 - 2011 worked as the chief expert of the debt collection department of ATF Bank in Pavlodar, then headed the breweries in Pavlodar and Uralsk. Forbes.kz managed to find a famous journalist who personally knew Yermek. On condition of anonymity, he said: "Taychibekov is seriously engaged in business, a lot - charity. He had a brewery, where he made everyone quit drinking. This is an unusual person, but he should not be afraid. Just when a person is different from others, they start thinking him crazy.».