In Europe, international law has died, it is being replaced by the right of a strong and cunning 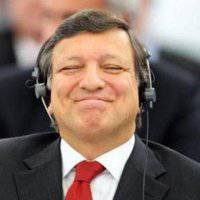 Valentin Katasonov about the response of Mr. Barroso to the President of Russia V.Putin ...


It was reported that after a prolonged pause, the President of the Russian Federation, Vladimir Putin, received an answer to his letters, which he sent to the leaders of European countries that are recipients of Russian gas. In these letters, V. Putin raised the issue of the problems associated with the transit of natural gas to Europe through Ukraine and invited European partners to discuss ways out of the current difficult situation. Like the one that emerged in the 2009 year, when the fault of Ukraine began interruptions in the supply of natural gas to Europe. I would like to comment on this answer.

Firstly, it is rather strange that the President of the European Commission, Jose Barroso, answers the President of the Russian Federation. Even more strangely, he responded on behalf of all 28 European Union member countries. In fact, Vladimir Putin specifically addressed the leaders of only those countries that are recipients of Russian gas. There are certain diplomatic canons that have not been canceled. Should answer those to whom the message is addressed. The most correct would be the personal response of each recipient. In a pinch, the recipients could ask Mr. Barroso (or some other EU official) to give a general response to the President of the Russian Federation personally from them, and not from the entire European Union. Apparently, in Europe, diplomacy ordered a long life.

It is difficult for me to say who is at risk from the potential interruptions in gas supply in the event of problems in the territory of the transit country. On exporter or importer. We must watch the contract. We must also look at the section relating to force majeure. It is also necessary to look at the sections in which the terms of the termination of the contract or the conditions under which amendments are made to the existing contract are spelled out. This is very painstaking legal work. Contact, as noted by dedicated experts, is very voluminous. There is no open access to it. Under normal conditions, all problems arising from gas supply should be resolved in negotiations between the exporter and the importer, and if they cannot agree, then in international arbitration. But, apparently, international law (as well as diplomacy) is dying. Therefore, “non-standard” procedures for resolving disputes and overcoming difficulties are applied.

Europe itself chopped off the branch on which she sat and continues to sit. She encouraged unrest in Ukraine. She acted against her interests because she acted on instructions from Washington. During the past months, the Russian Foreign Ministry and even President V.Putin have called on Brussels and the whole of Europe to undertake efforts to prevent an escalation of the conflict in Ukraine. Brussels did not want to hear our calls.

It is hard to believe that European politicians will be able to independently negotiate something with us. Even if they promise something, it is not a fact that they will keep their promises. They often forget their obligations the next day. I repeat once again that international law has died or almost died. There comes the right of the one who is stronger and more cunning. But Europe is not strong, and not very cunning. We have somehow stopped watching the financial and economic position of Europe lately, but it is appalling. At the end of this year, the national debt of the eurozone countries may reach the bar of 100% of their total GDP. Therefore, all the EU promises to provide some assistance to Ukraine are banal “verbal interventions”. That is, Europe is extremely weak, but continues to bluff.

And all her cunning is sewn with white thread. It reminds me of the cunning of Daladier and Chamberlain, who participated in the Munich Agreement with Hitler in 1938. Then they finally cut the branch on which Europe was sitting.

Jose Barroso’s proposal to connect the IMF to the problem of supplying natural gas to Europe makes me very worried. The more negotiators, the less chance of success. By inviting the Foundation, Barroso actually invites the United States, which is the largest shareholder of the Foundation. I believe that the negotiations should be bilateral. Do not create bad precedents. We don’t need a fund in these negotiations. He himself is almost bankrupt. If the Fund gives any money, then it is afraid that they can go to pay Ukraine’s debt to Gazprom. God forbid, Russia will get something! But the opposite happened more than once. At the end of last year, Russia, under an agreement on the 15 billionth loan, transferred to Ukraine 3 billion dollars. According to some data, part of this money went to pay Ukraine’s debt to the Fund.

In fact, the question that, in terms of the canons of international law, only the exporter and importer should solve, Barroso proposes to discuss the widest range of states, all of which are on the side of the importer. All 28 EU members plus IMF. And also (as stated in the response to Barroso) “all other relevant international partners”. Here it is necessary to separate the flies from cutlets. In the widest circle, the political situation in Ukraine can and should be discussed, since Ukraine is a potential source of European and even global instability. There may even begin a third world war. A catastrophe like the one that occurred in Chernobyl or Japan (Fukushima) can happen here, because the 4 NPP operates on the territory of Ukraine. So, negotiations on gas supplies are one thing, and negotiations on a general stabilization of the situation in Ukraine are another. Although, of course, everything is interconnected.

Specifically, the debt of Ukraine to Russia for natural gas. It already makes up 2,2 billion dollars. The international reserves of the National Bank of Ukraine now make up 15 billion dollars. According to his data, Ukraine can still repay the debt. The West is very worried that if Ukraine will pay Russia for gas (on average monthly payments amount to almost 1 billion dollars), then Kiev will have nothing to repay next repayments on loans from the IMF, IBRD, EBRD, European Investment Bank, and various private Western investors who purchased the papers of the Ministry of Finance of Ukraine.

Some passages from the letter to Barroso are frank distortions and exaggerations (if not to say, deception). Thus, a European official speaks of “generous trade preferences” that the EU allegedly provided to Ukraine. By the way, did not provide, but only plans to provide. This is a draft of the new association agreement of Ukraine within the European Union. Yatsenyuk somehow announced the amount of possible annual preferences in trade with the EU - miserable 600 million dollars. But at the same time he kept silent that goods from Europe would pour into the market of Ukraine for amounts measured by many billions.

It is with such a roguish public that we have to settle trade and economic relations connected with the supply of natural gas to Europe.

Ctrl Enter
Noticed oshЫbku Highlight text and press. Ctrl + Enter
We are
A great interview with Sergey Lavrov: about Ukraine, Obama and IranWhat you didn't want to know about England
Military Reviewin Yandex News
Military Reviewin Google News
98 comments
Information
Dear reader, to leave comments on the publication, you must sign in.