Stealth in the Donbass

April 21 2014
117
The closer the election of the Ukrainian president (the second president, because the first one is still very legitimate from a legal point of view), the more bluntly do the individual candidates begin to show. One of the most agile - a woman with a wand and on her heels is Yulia Tymoshenko, who by no means wishes to realize that Washington has already chosen the Ukrainian president a long time ago, and unfortunately for Yulia Volodymyrovna herself, this president is not she.


In order to prove his presidential viability and fight Poroshenko for the presidency, the “gas princess” decides to incarnate in the form of a commissioner in a skirt who holds a revolutionary gun in one hand, waving it in front of opponents, and in the other - something like bread heads. Ukrainian peacemaker.

Such a strange combination, as, apparently, Tymoshenko herself believes, does not look ridiculous at all. Well, if he considers - let him think. What would Yulia not amused ...

The pain in the legs, cramps in the back and cerebral agitation did not prevent the candidate to put on his duty shoes on his heels and go to conquer the Donbass. I conquered in connection with the new political tradition in Ukraine - secretly, using a charter for the flight, the visit was not announcing. Still would! After all, if the Donetsk residents knew in advance that the same lady was coming to the “rendezvous” with them, she had been called to shoot the southeast from nuclear weaponsthen they would have arranged an unforgettable meeting for her.

Yulia Tymoshenko announced that the main purpose of her visit to the Donbass is to meet with local security forces, as well as communicate with people blocking the buildings of local administrations. That's what she said: with people ... Sometimes you are amazed at how flexible people, aspiring to please the Olympians of the Ukrainian government, are able to use language forms. Yesterday, Tymoshenko replaced the word "people" in this context with "militants" and "separatists", and when the roasted rooster pecked something and when it was necessary to demonstrate its political "motherly feelings", the "separatists" in the language of Tymoshenko immediately turned in people. 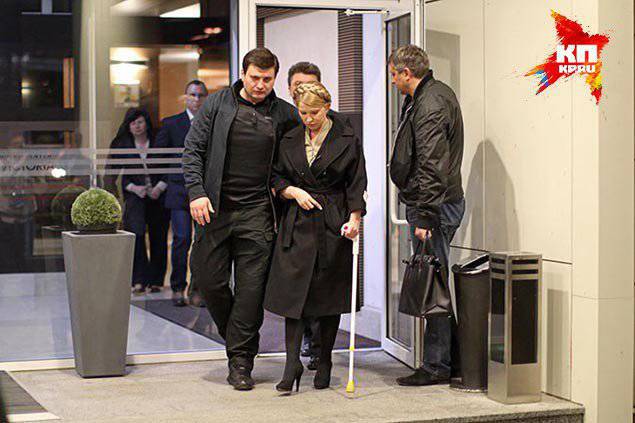 Tymoshenko said she wants the parties to sit at a single negotiating table to find a compromise.
The head of the party "Fatherland":

I want to negotiate with people who are in occupied premises. I want to understand who they work for and whether their requirements meet the requirements of local residents. I think it's time to sit down at the negotiating table ...

We need to find a compromise.

I know for sure that the special units of the Russian Federation, which are located in the east, do not take into account the wishes of citizens.

Well, of course! Now it is necessary to “cure” the southeast by the fact that it is allegedly all enmeshed in the Russian intelligence network, that the Kremlin dispersed its special forces from Krasny Liman to Odessa and provokes Ukrainian citizens to mortal sins. Perhaps today such rhetoric is generally the only opportunity for Tymoshenko’s candidate to make an impression on those who listen to her and those who look at her. Only here the impression is not unique.

For example, after the Donetsk "tour" Tymoshenko in Slavyansk decided to respond in a very peculiar way. Apparently, women’s pearls either with a scythe, or without a scythe, as well as throwing the pseudo-authorities of Ukraine, already got Slavyansk so much (and not only, I must admit, Slavyansk) that it was decided here to just take and ban all unnecessarily “progressive” parties at once: Batkivschyna ", pygnibokovskaya" Freedom "and klichkovsky" UDAR ". A sort of response to the pogroms of the party offices of the Communist Party of Ukraine in Kiev, in the west of the country.

People's Mayor of Slavyansk Vyacheslav Ponomarev noted that the ban concerns not only the activities of these political parties, but also their symbols. If Yulia Tymoshenko is considered the symbolism of the “Batkivshchyna” party, then we can assume that she may not expect to visit Slavyansk, at least in the near future ...

Let us return to the Donetsk visit of the candidate candidate. Mrs. Tymoshenko spoke at a local television center in pure Russian, announcing that she and she alone knew how to overcome the current crisis. At the same time, the lady with the wand made it clear in no uncertain terms that she sees the crisis only in the south-east of the country, and in other Ukrainian regions - not otherwise, the flourishing of prosperity ...

So about solutions from Tymoshenko. The first way: the development of local self-government with the right of citizens to elect local authorities, with the right to financial independence, plus the solution of the language issue (and not the “final solution”?) The language issue Yulia Vladimirovna in the south-east proposes to solve this way (cites "Moscow Komsomol"):

Providing a stronger status for the Russian language.

Of course, we know a couple of individuals who, in the Russian Federation themselves, published a textbook under the unique name “Russian language”, and now we will be familiar with another person who in the east of Ukraine is this language that will “strengthen” ...

Yulia Tymoshenko proposes the second way not even to Ukraine itself, but to Russia. An interesting turn of events, isn't it ... According to Tymoshenko, as already noted, the Ukrainian southeast is downright dominated by the Russian special services, armed units, agents and superagents, and therefore the candidate from “Batkivschyna” literally orders Russia to withdraw all these “hordes "From the territory of Ukraine.

Paranoid candidate - today it looks like a Ukrainian trend. Moreover, the brighter the paranoia, the more such a candidate would have a chance of success if it were not for the a priori decision of the United States in terms of who can be legalized in the presidency square. Although in this case, the well-known statement is the best for Yulia Vladimirovna: if you are paranoid, this does not mean that you are not being followed ... They are being watched! Ensure that paranoia remains within the framework originally defined for the candidate Tymoshenko.

Yulia Tymoshenko did not forget in Donetsk about the Geneva talks in the framework of the “Quartet”. And Tymoshenko mentioned these talks in a very original way (quotes "TVNZ"):

You know that yesterday, in Geneva, negotiations took place, at which an agreement was reached, that Russia is withdrawing its troops from the territory of Ukraine and gives Ukraine peace.

Yes? Honestly - did not know about such an agreement. I wonder at what stage of the negotiations in Geneva it was announced that it was necessary to withdraw Russian troops from the territory of Ukraine? Apparently, Tymoshenko watched some kind of “left” broadcast of the Geneva meeting. Exactly, “leftist”, because during the negotiations in Geneva, the parties agreed that all illegal armed units in Ukraine should be disarmed and all occupied office buildings, streets and squares should be freed.

The most interesting thing is that the “left” broadcast was watched not only by Yulia Tymoshenko, but, it seems, even the direct participant of these negotiations was the so-called Ukrainian Foreign Minister Mr. Deschychytsa (quoted "Kiev Gazette"):

If you carefully read these agreements, then we are talking about the release of streets, roads and squares that are illegally occupied by the protesters. As far as I know, activists on the Maidan are legally.

Such words give reason to suspect that either Deshchitsa was in a state of complete prostration in Geneva, or there was a man in Geneva who looked like Deshchitsa. Well, in fact, carry such nonsense - this is a clinical case. The Maidan is legal, and the squares of Donetsk, Slavyansk, Kramatorsk, and Lugansk are illegal. MA-LA-DEC ...

By the way, Yulia Tymoshenko stated that if the conditions of Russia are not met, then “Ukraine will defend itself with a weapon in its hands”. With an American weapon? .. And the so-called Donetsk Resistance Brigade, which came to visit? 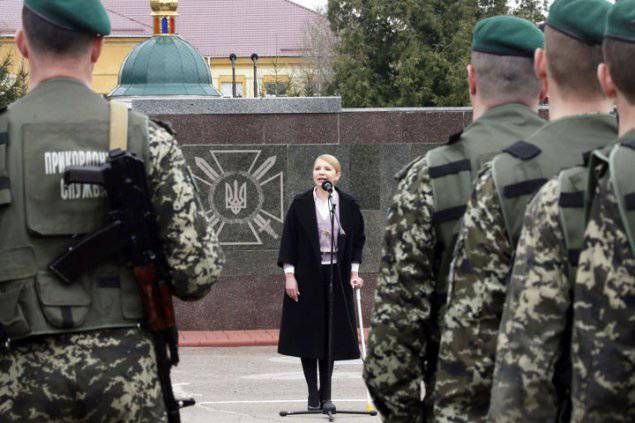 Yulia Vladimirovna, if all of Ukraine REALLY takes up arms, then you definitely will not have time to do even what your big-big “friend” Viktor Yanukovych managed to do ...

PS Yulia Tymoshenko’s entourage reports that she met with people occupying the building of the Donetsk Regional State Administration. The meetings were allegedly held in one of the hotels with representatives of the "Oplota" and the DPR. However, for some reason, there is no documentary evidence of such a meeting, apart from the words expressed on Mr. Schuster’s air ...