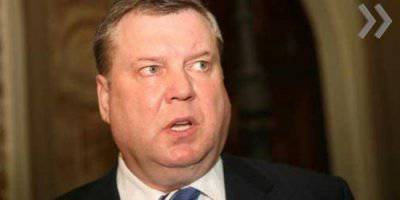 The chairman of the “Consent Center” faction in the Seimas Janis Urbanovich in an interview with “Vesti Segodnya” drew three scenarios for the future of Russia. The most dangerous option seems to be the most likely chairman: Attack Russia!


- I know that you closely follow the events in Ukraine and their reflection in the media of different countries. Who is lying more?

- Everyone lies. All keep back. All elegantly manipulate the facts under the desired concept of events. The Western press, talking about the unrest in the east of Ukraine, almost literally repeats the texts of the reports of Russian TV channels from Maidan. But there is nothing surprising: in times of crisis, information policy is always becoming so deceitful, self-serving and unprincipled.

From all that today "speak and show" in the West, it is possible to crystallize two main theses explaining what is happening. The first of them is conservative: "It is always like that with Russians, therefore they cannot be trusted, but only in the face." The second, more liberal, can be formulated approximately like this: “Putin is the new Hitler, and the Russian people are dark and suffer from their darkness, they feel sorry for him, he needs help.”

- And how do you feel about these theses?

- Concerning the whole Russian people, I can’t comment on anything, but I’ll say a few words about Putin. I believe that Putin should be viewed not as a specific person, but as the personification of today's Russian elite and the resultant of many of the forces that exist in this elite. If it were not so, he would not have lasted at his post for six months. And his phrase from the “Crimean speech” that “we were deceived over and over again, made decisions behind our back, put before a fait accompli”, I would suggest to consider and understand literally - as a result of the experienced and rethought.

Indeed, incomplete 15 years passed between the promise of US Secretary of State George Schulz not to expand NATO to the east and the fifth expansion of the alliance! And the West continued to use "salami tactics" against Russia. When the next cut piece was too large, Putin left the sausage shop, slamming the door loudly. Than pretty scared the attendants at the same time sausages.

- What, in your opinion, will be the formula of relations between the West and Russia in the new political situation?

- There are only three main possible strategies.

First strategy in general terms, wittily and bitingly stated in the article by the French writer Patrick Besson “Why Russia needs to declare war”: the time has come to complete the work begun by Napoleon and Hitler, “you need to take Moscow, because it is now possible.” As you know, in every joke - only a fraction of the joke. At least we can talk about modern modification of the Cold War - it’s not for nothing that this old woman with a stick is often commemorated in the West today. In such a scenario, the minimum program may be different, but the maximum program is only one: a radical “downsizing” of Russia, the cessation of its existence in the form in which it has taken place over the last several centuries.

Second script I would call pacifying or rather diplomatic. He assumes - while maintaining the whole double-edged rhetoric - conducting further negotiations, developing trade and reaching compromises on a wide range of issues, including the future structure of the Ukrainian state, as well as discussing such unpleasant things for the West as “Russian concerns”, of which the situation of ethnic Russians in some EU countries.

I think that Lavrov was referring to something like that when in January in Munich he said that relations between Russia and the EU approached the “moment of truth”, that it was necessary to solve “basic issues” and that indefinitely delay the state of uncertainty, apparently does not work". Is such a scenario currently possible? Possible, although not very likely. After all, tango, as you know, should dance two.

The third possible strategy of the West - “Neither war nor peace”, a sort of Trotskyism of the XXI century. The information war continues, appeals like: “We need to deal with Russians like men”, but everything remains at the level of emotions and demonstrations. The expectation that the other side will take some emotional step will make a mistake - in the end, the grandmaster can “yawn” the figure.

Judging by how events are developing now, the first scenario seems more likely - Attack Russia! There are many reasons for this - starting with the approach of the electoral cycle in the USA (democrats have always been reproached for weakness, and it is important for Obama to convince the American elite of the opposite) and ending with the clinical confusion that can now be observed in Europe.

- And you do not exaggerate the paint?

- No, today in Europe and the United States, as Besson put it, “scorn, disgust and hatred” reigns in Russia, and from this you can cook the coolest mess. More than others, it seems, Lithuanians are offended by Putin’s Russia. However, this can be understood: if the Vilnius summit had been crowned with the signing of an association agreement with Ukraine, the Lithuanian capital would have entered the European history Along with Helsinki, Maastricht or Yalta. But the “holiday” was spoiled by the Lithuanians.

And now we will conduct a mental experiment and imagine what will happen if the hawks of the present day succeed in offending or frightening collective Putin? I am ready to imagine that the Russian leadership in this case will unfold on 180 degrees and will try to agree “big” with the Chinese, even on Chinese terms.

Russia has demonstrated this kind of maneuver more than once in its history. Faced with a monolithic anti-Russian "European stance", Russia turned for many years to the south and east, while achieving impressive successes.

It remains to add that these days 200 is being celebrated as the entry into Napoleon Paris of allied forces led by Alexander I. This means that sooner or later, but Russia always returned to Europe ...

Ctrl Enter
Noticed oshЫbku Highlight text and press. Ctrl + Enter
We are
A great interview with Sergey Lavrov: about Ukraine, Obama and IranWhat you didn't want to know about England
Military Reviewin Yandex News
Military Reviewin Google News
102 comments
Information
Dear reader, to leave comments on the publication, you must sign in.