Americans do not consider Ukraine their problem ("The American Conservative", USA) 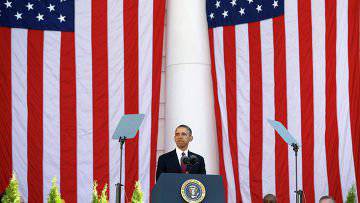 When Ronald Reagan called the Soviet Union an “evil empire,” these words reflected his belief that, although the struggle between East and West is geopolitical, it has a deep moral dimension. Reagan understood that if the Americans did not look at the Cold War as a battle of good and evil, they would refuse to sacrifice for the sake of its continuation the wealth of America and the blood of her sons. Such is the American character.


Jimmy Carter tried to deprive the conflict of the moral side, proclaiming: "We have overcome the inappropriate fear of communism." However, with his speech about the “evil empire”, Reagan again reduced the matter to morality. Nathan Sharansky called this episode "a moment of moral clarity." All this helps to understand why Americans want to stay away from events in Ukraine. They do not see the vital interests of the United States there and do not feel in the confrontation of the moral dimension.

If the secession of Ukraine from the Russian Federation was the triumph of self-determination, why should not the Russians of Crimea and Donetsk have the right to secede from Kiev and return to Russia? If Georgians had the right to free themselves from the power of the Russian Federation, why should the population of Abkhazia and South Ossetia not have the right to free themselves from the power of Georgia? “An eye for an eye” is an old adage. Journalists call Vladimir Putin a threat to the “rule-based” world we created. However, what rules have allowed us 78 days to bomb Serbia in order to tear off Kosovo from it - the cradle of the Serbian people? Maybe someone would need to teach a little history.

Compare how Putin organized the disengagement and annexation of the Crimea - without bloodshed and with full popular approval - with how Sam Houston and his friends organized the separation of Texas from Mexico and its annexation by the United States in 1845 year. When Mexicans tried to reclaim a controversial piece of lost Texas, James Polk accused them of shedding American blood on American soil, persuaded Congress to declare war, sent General Winfield Scott and his army to Mexico City and annexed the whole north of Mexico (now it's South -West USA and California).

The moral problem is difficult to see even in eastern Ukraine. The Kiev regime proclaims Russians as “terrorists” who capture the centers of cities in the same way as demonstrators from Maidan captured Kiev. If the Freedom Party and the Right Sector are fighting with the police and setting fire to the buildings to overthrow Viktor Yanukovych, the legitimately elected President of Ukraine, we are told that this is heroism. Why, then, usurpers, who inherited the power of Yanukovych, are unhappy when they behave the same way with them? Is this an obvious hypocrisy? And how do we Americans, in general, dare with a pious air condemn the actions of the Russians in Ukraine?

In the past decade, the National Endowment for Democracy and its various offspring helped set up a “rose revolution” in Georgia, a “tulip revolution” in Kyrgyzstan, a “cedar revolution” in Lebanon, an “orange revolution” in Kiev, and countless other “color revolutions” that overthrew intractable regimes and pulled countries into the orbit of America. Then Putin also learned to play by these rules. And now instead of engaging in a conflict that we successfully avoided for more than four decades of the Cold War, we probably should have stopped our “game of thrones” and sent the NED to a landfill.

Now the “war party” is trying to impose on the White House a choice of two options, and both can lead to a catastrophe. Firstly, we are invited to arm the Ukrainians. The result will probably be a war that Kiev cannot win. In addition, Ukrainians will believe that the Americans are ready to support them, although this is not true. The second option is sanctions. However, Europe, dependent on Russian oil and gas, is not going to arrange a recession for itself.

In addition, in response to Western sanctions, Moscow may impose sanctions against Ukraine, which ultimately drowns that “black hole of corruption and extravagance” into which, according to the Washington Post, the Ukrainian economy has become.

It is also not clear why we should send additional US ships to the Black and Baltic Seas, and the soldiers and the F-16 to Eastern Europe, if we are not going to fight with Russia anyway?

In one old song, Johnny Cash said that “no need to take to the city weapon"If you are not ready to apply it. President Obama and John Kerry, indisputably, got into a puddle again, as is the case with the Syrian red line. Nevertheless, they continue to climb into the affairs of others and rush to warnings and threats that they can not bring to life. They diligently bluff and boast, although the American people say to them: "This is not our fight."

Ctrl Enter
Noticed oshЫbku Highlight text and press. Ctrl + Enter
We are
Results of the week. "We will build this, that from Mars they will look and be surprised!"Situational analysis of the death of the MH17 flight (Malaysian Boeing 777), made on the basis of engineering analysis from 15.08.2014
Military Reviewin Yandex News
Military Reviewin Google News
20 comments
Information
Dear reader, to leave comments on the publication, you must sign in.