Stresemann as an alternative to Hitler 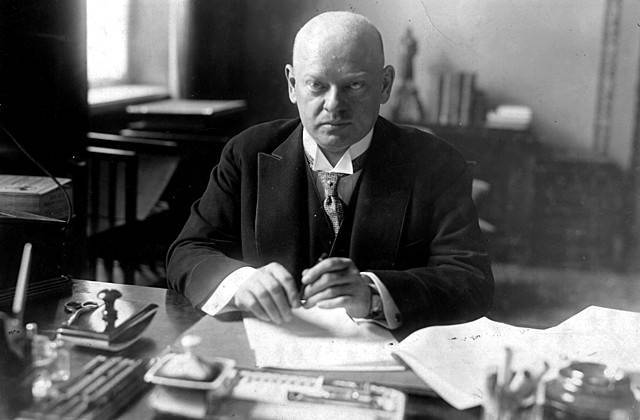 The key problem of the Versailles-Washington system of international relations, formed after the First World War, was the lack of integration of a great power, even if it had lost, into this system. Germany was humiliated at Versailles, lost part of the territories as a result of agreements with the winners, but remained strong enough to make a breakthrough in favorable circumstances and try to take revenge for defeat. In the end, this is exactly what happened. On the wave of revanchist moods against the background of the economic crisis at 1933, Adolf Hitler came to power in the country.

Until now, it is widely believed that Germany had no option other than left or right radicalization, aimed at a forceful change in the position of the country in the system of international relations. It is completely forgotten about the activities of the third path supporter, the almost permanent Minister of Foreign Affairs of the country in the 1920-s of Gustav Stresemann.

The list of his achievements is impressive. While he headed the department (1923 – 1929 years), he managed to repel the real threat of the country's dismemberment, return Germany to the category of great powers, restore the position of the German economy on the world market, and lay down the principles that began with 1925 in the year international relations, which took shape after the Versailles Treaty. Death in the 1929 year did not allow him to carry out his plans to the end, and in Germany there was no policy that could continue his course.

Stresemann's first victory was the termination of the French occupation of the Ruhr region. This key industrial region of Germany, producing 70% coal and 50% steel, was occupied by the French army in 1921 due to the refusal of the previous German government to pay the reparations imposed on the country.

To solve this problem Stresemann chose the tactic of "fulfillment of obligations". He did not refuse to pay reparations or negotiate with the Western powers, as his predecessors did, but insisted that in order to make payments to Germany, it was necessary to restore its economic power. This thesis drove a wedge between England and France: Paris wanted to continue the occupation of the country's west, and return its eastern and southern regions to the state of fragmentation they were in before Bismarck unified Germany, while the British leadership feared France would gain too much on the continent. With the approach of Stresemann, the French occupation was not a way to obtain legal payments, but a military aggression that impeded the payment of reparations. As Henry Kissinger, with the exception of France, characterized the situation, the rest of the allies would equally like to do away with the problem and receive at least some payments.

At the London 1923 Conference, Stresemann achieved a near-perfect solution for the country: the withdrawal of French troops from the Ruhr was agreed, and the payment of reparations was stretched for a long time and began to be carried out on the basis of American loans. 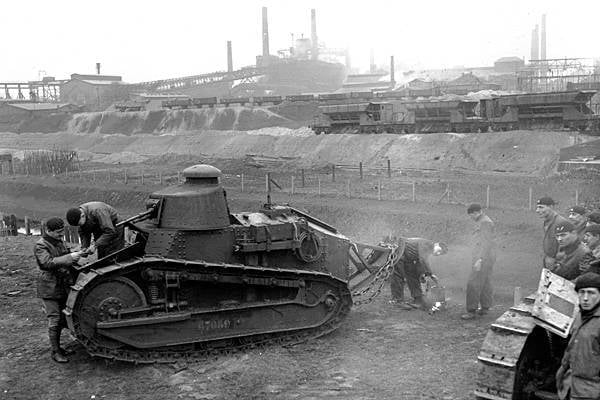 French military on the territory of the Ruhr area, 1923 year. Photo: AP

For five years, while the reparations payment schedule was in effect, Germany paid approximately $ 1 billion, receiving $ 2 billion in the form of predominantly American loans. That is, the remaining money from loans Germany used to modernize its industry.

For Stresemann, this was an unconditional victory, given that he repeatedly spoke of the importance of economic recovery for the revival of the political. “After the defeat of the German army, we have only two sources of power - the national spirit and the German economy,” he wrote.

Stresemann in his policy skillfully used the factor of Soviet Russia. After the Treaty of Rapalle in 1922, when the RSFSR and Germany established diplomatic relations, the Western powers were in a state of tension. Although Soviet Russia after the civil war could hardly provide Germany with economic support, the very possibility of a Soviet-German rapprochement helped the Reich Chancellor play nerves of the Western powers at the negotiating table. The danger of Soviet-German cooperation was particularly evident in the Polish question. Both countries had territorial claims to the Polish government, and the Rappal treaty created the necessary prerequisites for rapprochement.

In negotiations with Western countries, Stresemann, and later other German politicians used the Soviet factor, convinced that Germany acts as a barrier against Soviet expansion into Europe. Especially strong were the fears of the expansion of Moscow’s influence in Europe from London. British Ambassador in Berlin, Lord D'Abernon, wrote: “In addition to the danger of the spread of Bolshevism, which represents a great threat, the anti-British way of thinking was firmly entrenched in the Russian consciousness during the 19th century. The pressure of the propaganda of the Bolsheviks in combination with the traditional hostility can generate a force of tremendous power. ” This view of European events was especially popular among British leaders, and Stresemann was one of the first German politicians to notice this trend and use it properly, especially since he himself shared this viewpoint. In one of the entries in his diary, he wrote about the Soviet Union that “Germany and only Germany is the wall that can hold this“ Asian ”stream, and that it is necessary to strengthen the country politically, economically and militarily so that this wall does not collapse.” . 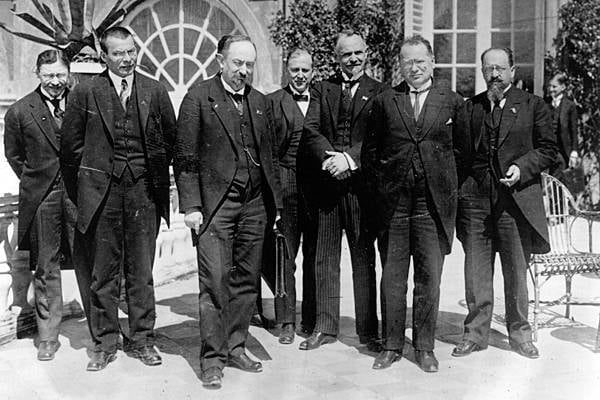 Of fundamental importance to Stresemann was the struggle against the 231 article of the Versailles Treaty. It stated: "Germany is responsible for causing all the losses and damages suffered by the Allied and United governments and their citizens as a result of the war that was imposed on them by the German attack." Never before in the world diplomatic practice, sanctions against the loser were not based on accusations of initiating war. Stresemann considered this formulation not just as a shame and humiliation for his country, but as a cornerstone of the whole system of post-war relations.

It is the moral responsibility of Germany for the start of the war that became the main cause of territorial annexations and reparations. Stresemann wrote that "the Treaty of Versailles stands on two bases: the statement about the German" fault "in the war and the German" unleashing the war "."

At the Locarno Conference of October 1925, agreements were signed that guaranteed the postwar borders of France, Germany and Belgium under the Rhine Pact and obliged them to resolve disagreements arising between them peacefully. The guarantor of these agreements were the United Kingdom and Italy. With the eastern neighbors of Germany only arbitration agreements were concluded, which do not contain provisions on the inviolability of the German-Polish and German-Czechoslovak borders.

This could be called Stresemann's triumph — his greatest foreign policy achievement.

First, for the first time since the end of the First World War, Germany was recognized as the winners as an equal partner. Secondly, Stresemann succeeded in securing the inviolability of borders against a possible French invasion. But these were only immediate, obvious advantages.

The Locarno Agreements marked the beginning of the revision of the Treaty of Versailles, since from now on Germany could only comply with the terms of the agreement that it deemed necessary to confirm. At the price of abandoning Alsace and Lorraine, and so lost, Stresemann received the right to proceed with a slow, gradual, but steady revision of the German eastern borders by the methods of the Versailles Treaty - namely, the right of nations to self-determination and economic pressure. The eastern allies of France were cut off from it, whereas the German minority lived compactly in their territories, which in time could require secession from these states. These sentiments could be warmed up by economic injections from Germany.

After Locarno, nothing could prevent the economic revival of Germany: the flow of foreign investment poured into the country, since it was possible not to be afraid of threats like the Ruhr occupation. Stresemann managed to achieve such impressive results without spoiling relations with Soviet Russia, that Berlin had additional advantages. 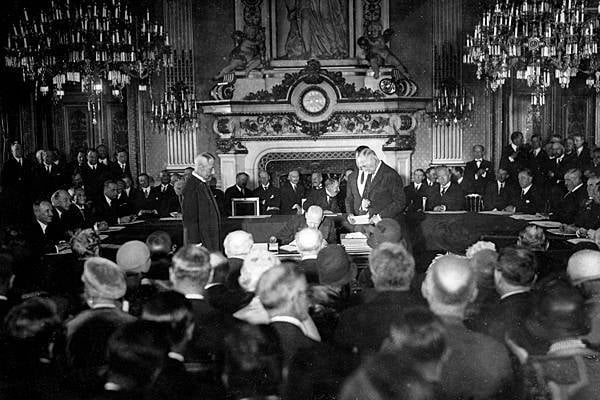 This was achieved due to the loyal position of the British establishment, which began to perceive Germany as a reasonable partner. Secondly, the Rhine Pact, initiated by Stresemann, became a game of preemption. The Minister understood that France would not calm down without receiving guarantees of the security of its western border. Therefore, he decided to be the first to openly initiate a guarantee agreement.

The final wording of the draft agreement suited Britain, since it extended to the eastern allies of France and did not impose any special obligations on the British, except those on which they would have to go one way or another, in fact they were only required to guarantee the mutual security of France and Germany from each other. friend Paris was forced to make an agreement, otherwise it would have looked like an aggressor in this situation. As a result, France was cut off from its Eastern partners - Poland and Czechoslovakia. And in the future, Germany would have had the opportunity of revising the borders in the east, which was obvious to German politicians. According to Stresemann's plan, Germany had to first restore its economic power, relieve the burden of reparations and bring about the abolition of arms limitations, having reached military parity with Great Britain and France in the long term. And only then could it be a question of creating a state, as Stresemann wrote, whose “political frontier covers all areas with German populations living within the closed German areas of settlement in Central Europe and wishing to join the Reich.”

The result of Gustav Stresemann’s foreign policy was the restructuring of the European system of international relations. Germany has returned to the category of great European powers with a strong economy. Only through negotiations and diplomacy, agreements were reached that allowed the next generations of German politicians to reform the Versailles system in accordance with German interests. The country's western border was safe from the French invasions, the eastern border was open to the necessary maneuvers. German politicians could change the map of Eastern Europe to correct the "injustices" of the Versailles Treaty. The only thing that was required of them was to observe the “rules of the game” that were adopted in Locarno: the inviolability of the borders of England and France and the spirit of the League of Nations. A key player in European politics - the United Kingdom - was not going to interfere with German actions aimed at revising Versailles in the eastern direction. The British leadership saw the key to its own security only in the inviolability of the borders of Western European states. In London, the opinion expressed by Chamberlain prevailed: "As long as the current territorial settlement in Western Europe exists, the United Kingdom is safe." France after Locarno moved to a strategic defense, not seeing an opportunity to put pressure on Germany without British support.