Shot in the top ten. Russian weapons are coming into fashion 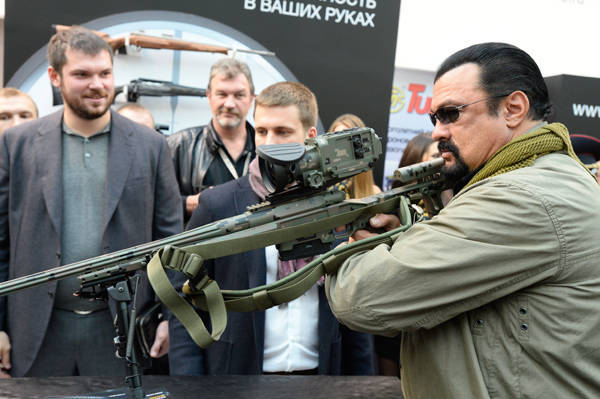 The ORSIS T-5000 sniper rifle, which was developed and produced in Moscow, will be tested in Pakistan. This was announced at the International Exhibition DSA-2014, which completes its work in Malaysia.

According to the head of the Russian delegation, Rosoboronexport director for special assignments Nikolay Dimidyuk, the exhibition was a success. More than 30 delegations visited our exhibit. There were very substantive talks with the Secretary General of the Ministry of Defense of Malaysia, Ismail bin Haji Ahmad. The Armed Forces of this country showed interest in the Buk-M2E anti-aircraft missile systems, Russian armored vehicles, the Pantsir-C1 anti-aircraft missile and cannon systems, and Russian-made aircraft modernization.

In general, the growing interest in weapons and military equipment offered by our country for export will be explained. She has worked well in various regions of the world. In addition, Russia fulfills its obligations regardless of the political situation and has never threatened anyone with sanctions. Today it has become especially appreciated.

Nevertheless, a real breakthrough on the world market of Russian high-precision was a sensation. weapons. It is no secret, Kalashnikovs have become the most common due to their simplicity, unpretentiousness and high reliability. Without disputing this, Western competitors put forward such an argument: Russian small arms are good for an ordinary soldier, and a completely different system is needed to equip a professional warrior: expensive, complex, well designed and very high-precision. And this in Russia, in their opinion, was never able to do.

And the complete surprise for refined small arms traders of “true professionals” was the appearance on the market of sniper rifles ORSIS T-5000.

Stainless steel barrel. The diameter of the muzzle - 23 mm. The caliber of the bullet is measured according to the internationally accepted standard. These are perfectly calibrated calibers in terms of ballistics: 308 Win, which corresponds to 7,62-mm and 338 Lapua Magnum - that is, approximately 8,6 mm.

The rifle is equipped with a three-chamber muzzle brake of the original design. Bed of alloy materials. There is an ergonomic pistol grip and adjustable butt. Rifle weight from 5,6 to 5,8 kg. Removable magazine on 5-10 ammo. Made for right-handed and left-handed users. In ballistics there is the concept of angular minute MOA - the minute of angle. It indicates the accuracy of shooting in the absence of wind and is measured in a series of five shots. Sniper can be considered only the trunk, which provides MOA below one. Rifles, now produced in Moscow, show the "angular minute" below 0,5. In the world of such high-precision unit systems.

The sighting range at which an experienced shooter gets from this rifle into the "top ten" is one and a half kilometers.

When a former Special Forces soldier of the US Armed Forces was a great connoisseur of small arms, and now the famous actor Stephen Seagal took the T-5000 for the first time, he was delighted. After reviewing the creators of the rifle and its production technology, Stephen Seagal agreed on the design and mass production of a powerful sniper rifle called ORSIS by Steven Seagal. The weapon will be different ergonomic design and the ability to hit targets at a distance of 2400 meters. Work on the Russian rifle from Steven Seagal are in full swing.

In addition to Pakistan, Indonesia, Malaysia, the Philippines, and even Saudi Arabia have shown interest in the latest sniper systems offered by our country. It is possible that the tests T-5000 will be held in the climatic conditions and these states.