So who and how took the checkpoint in the Ukrainian Sergeevka? 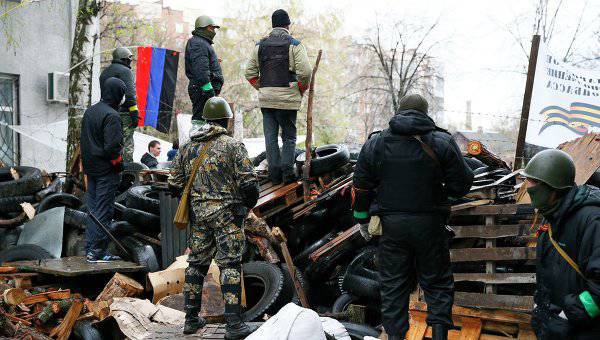 Touches me to the media. It is clear that I want to put the material “hotter”. But how much time it would be necessary to devote at least some time to verifying the veracity of this material. In order not to be trapped.

It would be too late for Borjomi to drink, but still, for the sake of justice and purely in order to throw a pebble into the garden of some media, I talked to my sources in that area.

It did not take much time to ask the one who has Skype to call the one who does not have it, but who was a participant in the events at this roadblock.

How it is presented by the media can be judged by the headlines.

"Near Slavyansk, the Ukrainian military defeated the checkpoint of protesters" - korrespondent.net;
"In Sergeevka, Ukrainian paratroopers defeated the separatist checkpoint" - kramatorsk.info
"The outpost of the protesters was crushed in the village of Sergeevka, located in 17 km from Kramatorsk" - NTB.Ru

Etc. A full-fledged clash is drawn, during which there were killed and wounded, the ruins of this same post and the like. Naturally, low-flying helicopters and planes, Tanks and APC attackers. The path to Slavyansk is free.

And now a little truth.

Roadblock near the village of Sergeevka. Why none of the borzopistsev not puzzled to look at the map? What does it have to do with Slavyansk? And where is Raisin, in which, in fact, the forces of those conducting ATO are concentrated? Nothing that a bit in different directions?

You can, of course, assume that the roadblock was attacked by those who were landed from helicopters at the airport of Kramatorsk. This is more logical. But then the question (see map) - how did they clear the road to Slavyansk by attacking a roadblock in the direction opposite to Slavyansk? There is nothing to think about, the clinic is there.

Group of so-called seven separatists from the village of Sergeevka expressed their attitude to the events by equipping a roadblock on the road leading to Kramatorsk. By trivial piling tires from the collective farm tractors on the above road. And hanging out around her in his spare time from the main occupation.

Seeing the amount of the enemy, which was approaching the so-called “enemy force”, is clearly superior to them, the soldiers simply burnt the heap and dumped them home under the cover of a smoke screen.

When I asked about the “cause of the fire that the media is finding out,” the answer was utterly short: “Why, there’s a car and a half of gasoline and a lighter.” Everything.

With whom the valiant warriors fought first at the National Guard under (according to the first media reports), and later the paratroopers are unknown. Also lies the message of the dead and wounded. Yes, the collective-farm watchman at the granary was injured (easily, in the leg) by a stray bullet at the end of the flight.

Everything else is bullshit.

My personal opinion, which may not coincide with any other - everything described in a pile of materials in both the Ukrainian and Russian media is nothing more than an attempt by the Ukrainian junta to declare at least some kind of “victories” to raise its own reputation.

Ctrl Enter
Noticed oshЫbku Highlight text and press. Ctrl + Enter
We are
Results of the week. “We will define your disgraceful ailment as a feat: we will send to the paratroopers. There you also will start shit "Results of the week. "Kazan ... took ... Astrakhan ... took ... Revel ... took, Shpak ... n-did not take"
Military Reviewin Yandex News
Military Reviewin Google News
137 comments
Information
Dear reader, to leave comments on the publication, you must sign in.