Turchinov and Yatsenyuk: Ukraine is ready for constitutional reform and decentralization of power

The Ukrainian government is ready for constitutional reform, as a result of which regional and district state administrations will be liquidated. This was reported by Acting President Oleksandr Turchynov and Acting Prime Minister Arseniy Yatsenyuk. Yatsenyuk called on the Verkhovna Rada deputies to adopt an amnesty law for protesters in the very near future. 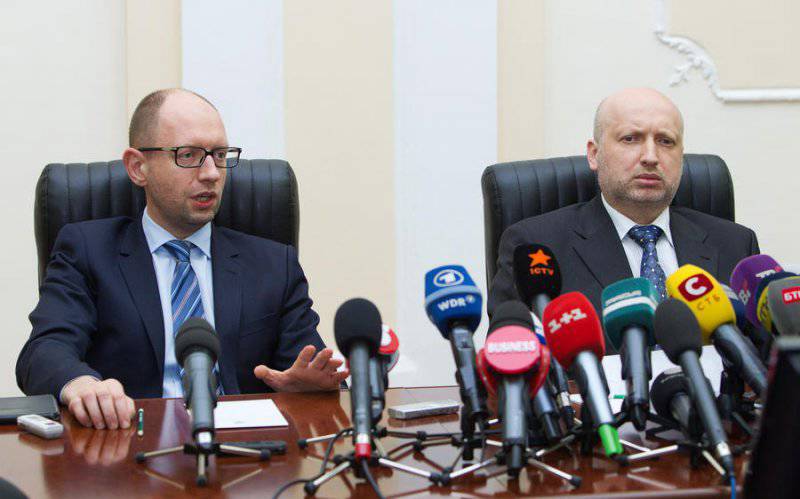 "The state leadership, with the support of the majority in the Verkhovna Rada of Ukraine, will make every effort to immediately review the relevant changes in the Constitution of Ukraine and to conduct local government reform in Ukraine and the organization of power in the regions, providing for the decentralization of power and the empowerment of territorial communities," said the President of Ukraine.

The document specifically states the status of the Russian language in Ukraine. "In order to achieve peace and harmony among the citizens of Ukraine, the right of regional, city and district councils to decide on granting the official status of the Russian or other languages ​​spoken by the majority of the local population simultaneously with the state Ukrainian language will be ensured," the document says .

The statement says about the amnesty for protesters in the country. "The Government of Ukraine submitted to the Verkhovna Rada a bill providing for the prevention of criminal prosecution, bringing to criminal or administrative responsibility of persons regarding the events that took place during mass protests, subject to voluntary surrender to state bodies weapons, military supplies, explosives or devices, and the release of all buildings and offices of state bodies and local governments that were occupied during mass actions, ”the document says.

“The Ukrainian government is ready to conduct a comprehensive constitutional reform that will consolidate the powers of the regions. According to this reform, regional and district state administrations will be eliminated, people will choose the appropriate councils and executive committees, ”the acting president said. prime minister

According to some reports, the statement Yatsenyuk is now broadcast on television channels in Ukraine.

Arseniy Yatsenyuk specifically noted that this document was the result of a quadripartite meeting in Geneva, in which Ukraine, the Russian Federation, the United States and the European Union took part.

Yatsenyuk also urged the Verkhovna Rada to adopt as soon as possible a law on amnesty for all those who participated in the riots. “It's a shame that this law is not voted. It could be accepted if it was the will of our political opponents. However, we urge all parties to stabilize the situation as soon as possible and next week in parliament to vote this bill, ”the Ukrainian politician emphasized.

Ctrl Enter
Noticed oshЫbku Highlight text and press. Ctrl + Enter
We are
The action “Military service under the contract is your choice!” In Rostov-on-Don: future contract servicemen, exhibitions and “Russian Knights”Protesters in Kiev are driving Verkhovna Rada deputies back to the building
Military Reviewin Yandex News
Military Reviewin Google News
90 comments
Information
Dear reader, to leave comments on the publication, you must sign in.